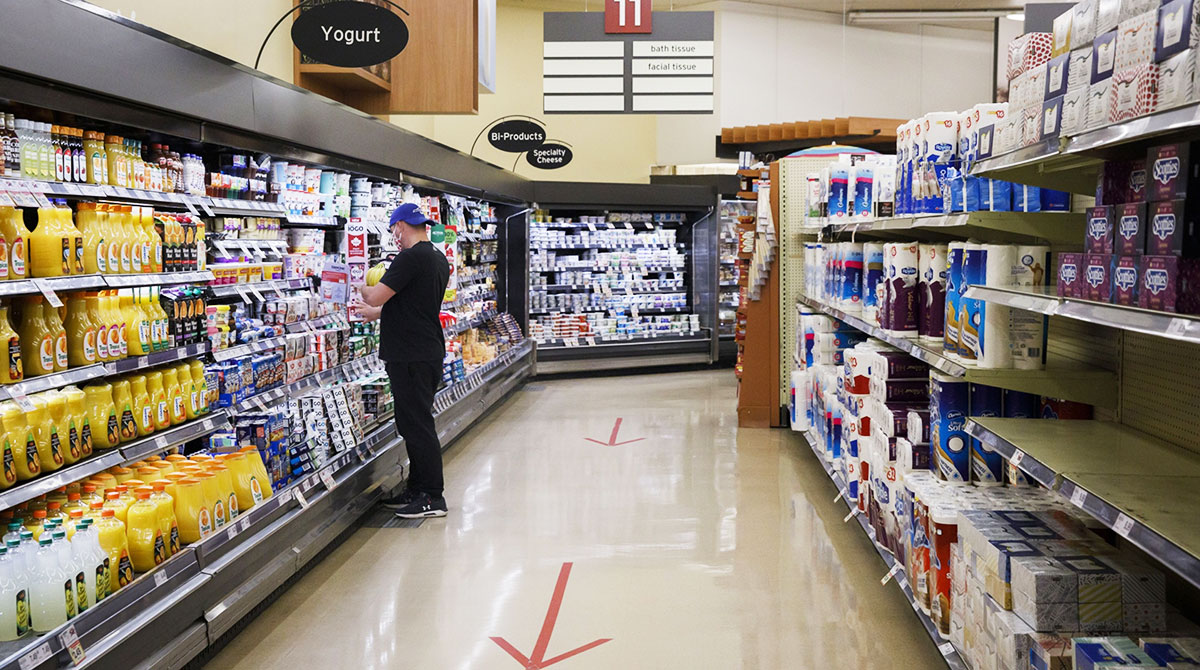 A person wearing a protective mask shops inside a grocery store in Picton, Ontario. (Cole Burston/Bloomberg)

Canadian inflation climbed to the highest in two decades, adding pressure on the Bank of Canada to raise interest rates.

The consumer price index rose 4.7% in October from a year earlier, compared with 4.4% in September, Statistics Canada said Nov. 17 in Ottawa. The October number is the highest since 2003, when it last hit 4.7%. Inflation hasn’t exceeded that level in the three decades since the Bank of Canada first started targeting inflation in 1991.

The 4.7% figure for October was in line with the median estimate of economists in a Bloomberg survey. On a monthly basis, prices rose 0.7%, on par with estimates.

The Nov. 17 inflation report marks the seventh straight month with inflation above 3%, the upper band of the Bank of Canada’s control range, and adds to growing concerns that price pressures are proving more persistent than had been expected. Inflation worries prompted the Bank of Canada last month to signal it could start raising interest rates — currently at historic lows — early next year. 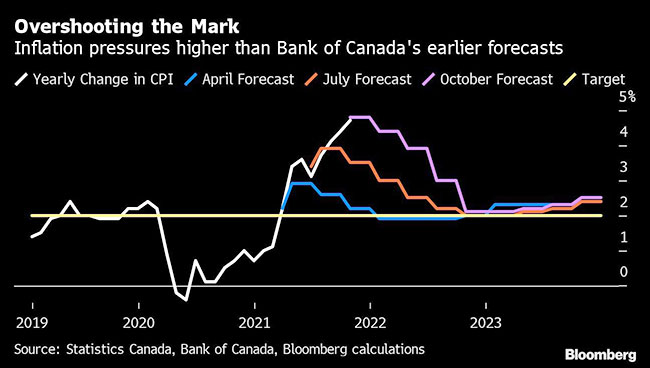 But for the Bank of Canada and other central banks around the world, the worry is that tightening monetary policy too aggressively could thwart a pandemic recovery that remains incomplete.

“It’s certainly lasting much longer than I think anyone anticipated, and unfortunately is likely to persist at least through the turn of the year before we see some improvements on the supply side and some pullback on commodity prices,” Sal Guatieri, a senior economist at BMO Capital Markets, said on BNN Bloomberg Television.

Markets anticipate that the Bank of Canada will raise its benchmark overnight policy rate to 1.5% over the next 12 months, from 0.25% now.

Bonds rallied, reflecting relief that inflation didn’t exceed expectations as has been the case in the U.S. and elsewhere. The Canadian dollar weakened to C$1.2577 per U.S. dollar. Last week, the U.S. reported inflation at 6.2% for October, above expectations.

The average of the central bank’s core measures — often seen as a better indicator of underlying price pressures — was unchanged at 2.67%.

While central bank officials continue to insist that inflation is largely driven by temporary factors linked to energy prices and supply constraints, one concern is that inflationary pressures could become embedded in expectations if they continue to persist.

If inflation expectations move higher, that could cause a wage-price spiral that could be difficult to rein in. Wages have risen more slowly in Canada than in the U.S. Average hourly wages increased by 2.1% over the past 12 months, less than half the pace of inflation.

Higher prices for energy, shelter and food have led the gains. Gasoline prices are also a big contributor, up 5% in October and 42% from a year ago. The global chip shortage continued to affect the production of autos, with prices for motor vehicles up 6.1% on the year.