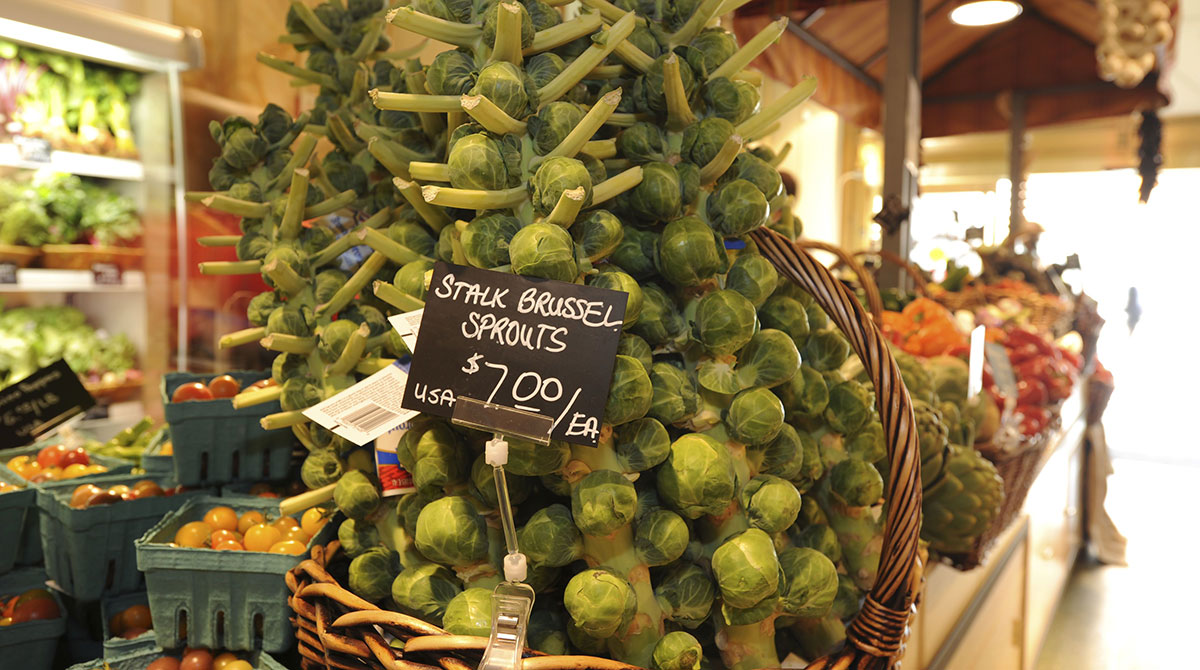 Brussels sprouts stalks are displayed in the produce section at Eataly in New York. High-end grocery stores such as Eataly may solve some malls' problems. (Bloomberg News)

Between movie theaters, fitness centers and full-on amusement parks, American shopping malls have scrambled for years to attract new visitors to counter plummeting foot traffic. Even before the coronavirus struck, the concept of the mall — once so central to suburban life — was increasingly viewed as an anachronism.

Now, with pandemic precautions falling by the wayside and brick-and-mortar shopping eyeing a revival, it’s looking like there may be a strategy for the old standby to survive amid the hordes of Amazon delivery vans.

When the Westfield Oakridge mall in San Jose, Calif., opened the popular Asian grocery store chain 99 Ranch Market in March, its debut saw lines snaking out the door. Since then, the mall’s foot traffic has jumped, with customer visits up more than 10% in July compared to pre-pandemic levels, according to traffic analytics firm Placer.ai.

RoadSigns � RS91: How Will the Rise of Smart Trailers Change Fleet Management?

In addition to grocery store staples like produce and meat, the supermarket has also attracted shoppers with its dining hall and tea bar. What’s surprising is 99 Ranch took up residence in one of the mall’s anchor spots, which had typically gone to massive chains like Target Corp. or Macy’s Inc. It’s the supermarket’s first location inside a megamall.

At the Westfield Valley Fair mall in nearby Santa Clara, the shopping center also saw its visits rise after the June arrival of Eataly, the all-in-one Italian marketplace, restaurant and cooking school. It was already one of the better-performing malls in the U.S., but Eataly seemed to drive more foot traffic. Visits to the mall during the store’s opening week surpassed 20% for the first time in months, and have remained elevated compared with 2019 levels, according to Placer.ai.

Malls were already reeling before the pandemic, with shuttered stores and bankruptcies legion. They didn’t pivot fast enough in the face of Amazon, resulting in dwindling traffic, lower sales and shuttered storefronts. Once the existential threat of e-commerce became clear, owners struggled to find ways to get people out from behind their computers, with new and strange offerings and more diverse tenants.

As far back in 2017, Credit Suisse was already predicting that between 20% and 25% of U.S. malls would fail in just five years.

Then COVID-19 arrived. Dozens of mall-based retailers sought court protection, including J.C. Penney Co. and J. Crew. Macy’s announced plans to close more than 125 stores at the beginning of 2020, citing too many locations in underperforming malls. Nordstrom and Bed Bath & Beyond also announced widespread closures.

Could fancy food destinations stop the bleeding? The test isn’t only foot traffic — it’s also about attracting other retailers. But for now, the strategy looks promising.

“The result has been a rise in other tenant types that could have a waterfall effect, driving even more mall tenant diversity and new opportunities for less traditional mall tenants,” said Ethan Chernofsky, Placer.ai’s vice president of marketing. “While they are still not an indoor mall staple, there is ample reason to believe that their role within this segment will increase.”

Although grocery stores have anchored strip malls for decades, traditional supermarkets and groceries haven’t been a dominant presence at indoor U.S. malls. While roughly one in five enclosed shopping malls has a grocery store, according to data from commercial real estate analytics firm Green Street, half are Targets. The phenomenon is much more common overseas.

But grocery stores have been a growing U.S. consumer segment over the last few years. Except for so-called value outlets and “dollar” stores, grocers have had the most store openings, outpacing home improvement, electronics and superstores, according to an analysis of store openings between 2019 and 2021 from Green Street. The firm’s research shows adding a grocer can boost traffic by upward of 20% at a shopping center.

“One reason that we’re seeing grocers become a more commonplace tenant within the mall spaces is because we witnessed the resilience of grocery-anchored strip centers or open air-retail throughout the pandemic,” said Emily Arft, a retail analyst at Green Street. “That reaffirmed the importance of brick-and-mortar retail.”

Much of that growth was driven by the widespread adoption of in-store pickups for online orders, which helped cement the relevancy of brick-and-mortar stores, Arft said.

That said, roughly half of grocery stores at shopping malls are located in what industry experts call a “Class B” mall — not the gold-standard Class A mall that is more likely to house luxury goods. Class B malls, which are more likely to attract middle-class clientele, have struggled more than their wealthier cousins. As a result, they’ve been forced to think more creatively when it comes to finding tenants. More than 300 malls in the U.S. are categorized as B-tier malls.

“Malls that are struggling a little bit more are going to require more nontraditional tenants like grocers,” said Arft.