Biggest Electric School Bus Deal in US Approved in Maryland 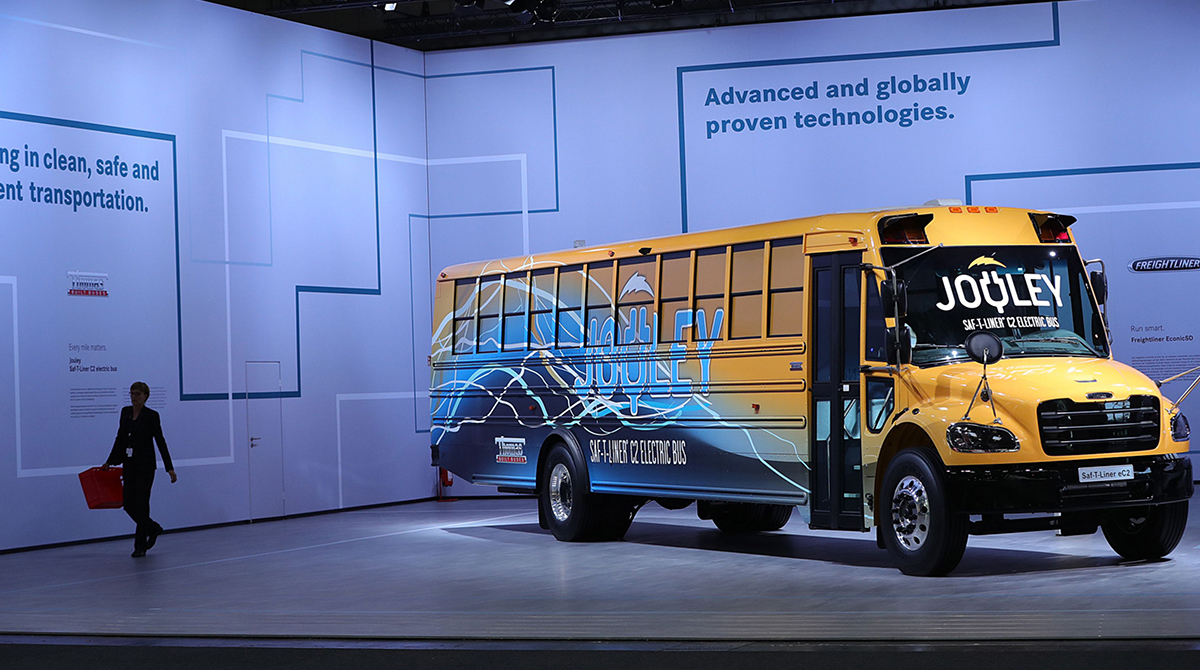 A school system outside Washington is poised to become the nation’s biggest operator of electric school buses.

The Board of Education in Maryland’s Montgomery County voted unanimously Feb. 23 to approve a 16-year, $169 million contract to lease 326 buses, part of a plan that could result in the county replacing its entire 1,422-bus fleet over the next two decades.

The deal represents the largest municipal government order of any kind for buses, according to Monique Harris, a spokeswoman for Advanced Energy Economy, a business association that promotes clean energy use.

The Biden administration has pledged to support the adoption of electric vehicles, and automakers have said they intend to convert their fleets to electric in coming decades. The U.S. Postal Service announced earlier Feb. 23 a 10-year contract to replace as many as 165,000 vehicles with ones that have either fuel-efficient engines or are powered by batteries.

Montgomery County is working with a vendor that is paying to install equipment to charge the buses at night when power costs are low in exchange for being able to resell unused power from the bus batteries back to the grid when it is more valuable.

Essie McGuire, associate superintendent of operations for the Montgomery County school system, said during the Board of Education meeting that the idea of increasing the electrification of the school bus fleet had been under discussion for some time.

“There was some hope for a while that we would be able to perhaps secure a very small number through, perhaps, some grant funds,” she said. “But as time has gone on, we really wanted to take a more ambitious approach.”

Plug-in car supporters say they hope the deal becomes a template for school districts and government agencies across the country.

The vehicles will be built by Thomas Built Buses Inc. and Proterra Inc. in a deal coordinated by Highland Electric Transportation Inc. Todd Watkins, the transportation director of Montgomery County Public Schools, said the contract would be the first electric school bus contract in the nation that is not dependent on federal grants.

Highland will provide buses, install charging facilities at the county’s bus depots and train drivers. The company will also provide maintenance and manage the charging operation.

The county estimates that the costs will be in line with what it would have spent on diesel buses and operations.

Watkins said the deal allows the county to avoid high up-front costs and predicted the costs of electric buses would continue to drop as more districts ditch the diesel-powered vehicles that have been standard for generations.

“It costs no more than what districts are spending on diesel,” Watkins said. “We think there’s going to be savings initially on fuel and maintenance. The price of electric buses will fall and the price of diesel buses is going to rise to the point that they meet. And, eventually, you won’t be able to get a diesel bus.”

“I’ve been hearing at national conferences that this is going to take over the school bus industry,” he said, adding that school buses are a natural fit for fleetwide electrification. “We know exactly where they are going to be overnight and we know how far they’re going to go. It’s sort of the perfect vehicle to electrify.”

The district is expected to receive the first 25 buses by the end of the year. The county will receive 61 additional electric buses in fall 2022, and approximately 120 electric buses for each of the remaining two years in the additional phase of the contract.

Duncan McIntyre, CEO of Highland Electric Transportation, said the plan is a “scalable transition to electrification” that is “almost 100% privately financed.”

Genevieve Cullen, president of the Electric Drive Transportation Association, said there is an urgent need to electrify heavy-duty vehicles such as buses and trucks. She added that such vehicles represent only 5% of the vehicles on American roads, but they are responsible for 29% of transportation emissions.

“Obviously transportation is a major contributor of greenhouse gas emissions,” Cullen said in an interview. “Medium- and heavy-duty contribute heavily to those emissions. To get at the problem, you have to get at medium- and heavy-duty. Because they’re big emitters, the benefits are bigger. You can also throw in the fact that because fleets are large purchases, they’re market moving.”