No Deal Yet, but Biden Vows to ‘Get It Done’ 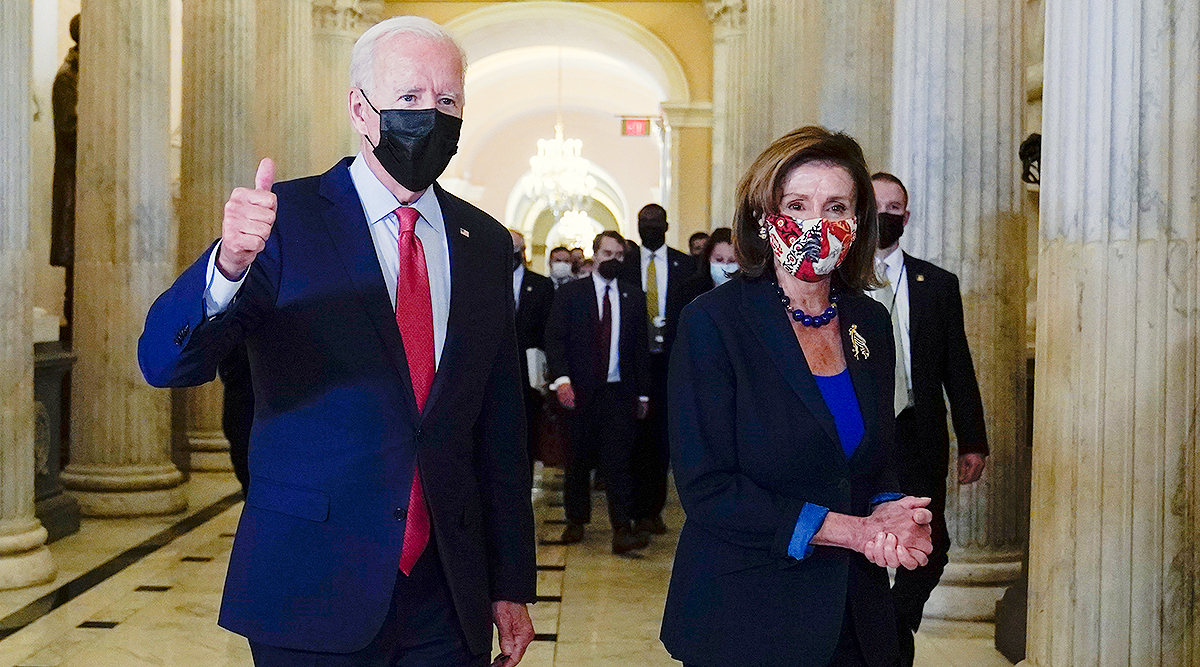 “It doesn’t matter whether it’s six minutes, six days or six weeks — we’re going to get it done,” Biden (left) said after meeting with Nancy Pelosi and Democrats at the Capitol Oct. 1. (Susan Walsh/Associated Press)

WASHINGTON — President Joe Biden pledged Oct. 1 at the Capitol to “get it done” as Democrats strained to rescue a scaled-back version of his $3.5 trillion government-overhaul plan and salvage a related infrastructure bill after days of frantic negotiations.

But it’s not getting done right now.

Biden huddled with House Democrats on their home ground in a private meeting that was part instructional, part morale booster for the tattered caucus of lawmakers, telling them he wanted both bills passed regardless of the time it takes. He discussed a compromise topline of $1.9 trillion to more than $2 trillion for his bigger vision, according to lawmakers in the room.

But it was clear they are all now in it for the long haul as the White House and its allies in Congress prepared for protracted negotiations.

“It doesn’t matter whether it’s six minutes, six days or six weeks — we’re going to get it done,” Biden declared to reporters as he left his late-afternoon meeting at the Capitol.

Biden’s sudden excursion to Capitol Hill was aimed at giving the legislation a needed boost toward the finish line. Holdout Democratic Sen. Joe Manchin of West Virginia had sunk hopes for a swift compromise on a framework when he refused to budge late Sept. 30 on his demands for a smaller overall package, around $1.5 trillion, despite hours of shuttle diplomacy with White House aides.

Without a broader deal, prospects for a Oct. 1 vote on the companion infrastructure bill stalled out, progressives refusing to lend their votes until senators reach agreement. Speaker Nancy Pelosi said in a late-evening letter to colleagues that “more time is needed” as they shape the broader package.

Instead the House passed a 30-day stopgap measure to keep transportation programs running during the stalemate, essentially setting a new deadline for talks, Oct. 31. The Senate followed with approval Oct. 2, halting the furloughs of more than 3,500 federal transportation workers, a byproduct of the political impasse.

Pelosi in letter to House Dems says though they’ve made progress on reconciliation negotiations, “more time is needed to complete the task”

Also: “Clearly, the Bipartisan Infrastructure bill will pass once we have agreement on the reconciliation bill.” pic.twitter.com/bvVc2TlEUH

With Republicans solidly opposed to Biden’s sweeping vision, the president and his party are reaching for a giant legislative accomplishment on their own — all to be paid for by rewriting federal balance sheets with tax hikes on corporations and the wealthy, those earning more than $400,000 a year.

As action ground to a halt Oct. 1 in Congress, Biden appeared to offer no particular new legislative strategy. Keeping her promise to centrists, Pelosi had insisted there would be a “vote today” on the $1 trillion infrastructure bill that is popular but is snared in the debate over Biden’s broader measure.

With Democratic progressives refusing to give their support for that slimmer roads-and-bridges bill unless advances are made on the president’s big bill, Pelosi with an oh-so-slim House majority was unwilling to call for a vote.

Biden, by insisting that both bills pass, gave a nod to the progressives’ strategy, while floating the lower numbers acknowledged the compromise with centrists to come.

“He was really clear that we need to get both bills done,” said Rep. Pramila Jayapal (D-Wash.), a leader of the Congressional Progressive Caucus.

Attention returned to Manchin and to some extent Sen. Kyrsten Sinema of Arizona, two centrist Democrats who helped steer the $1 trillion infrastructure bill to Senate passage but have concerns that Biden’s overall bill is too big. The two senators have infuriated colleagues with their close-to-the vest negotiations that could tank Biden’s effort — and their own campaign promises. 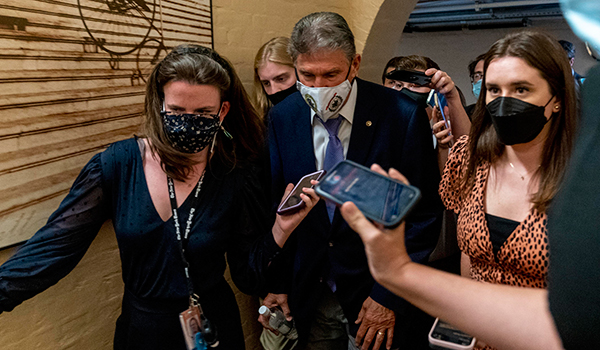 After hours of negotiations that stretched near midnight Sept. 30, Manchin said he could not yet compromise beyond his $1.5 trillion offer.

Biden, a former six-term senator making his first in-person visit to a House Democratic caucus, told the lawmakers Oct. 1 that “I know a little bit about the legislative process,” according to a person familiar with the private remarks and granted anonymity to discuss them. Even a smaller bill can make historic investments in such areas as childcare, daycare and clean energy, he said.