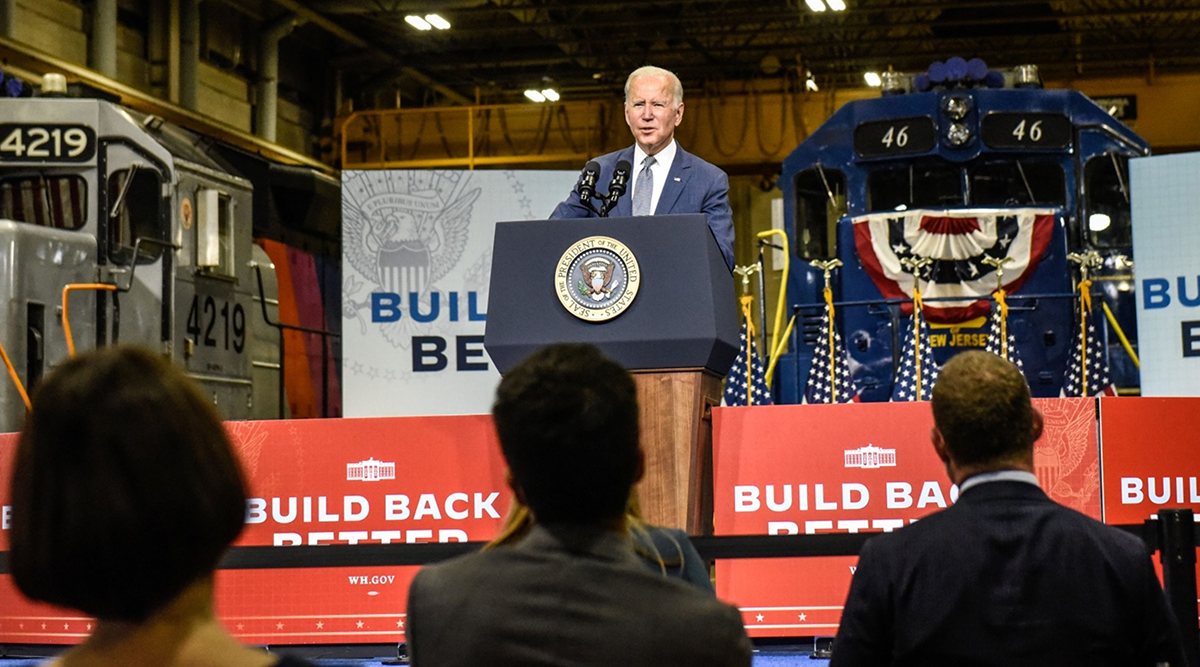 President Joe Biden argued for his economic agenda in New Jersey on Oct. 25, pointing to a train bridge in the state that sometimes can’t be closed without the help of sledgehammers as a sign of decaying U.S. infrastructure.

Biden’s visit was part of his campaign to build public support for a pair of bills congressional Democrats are debating to invest trillions of dollars in public works and to fight climate change and bolster social welfare.

Biden called the Portal Bridge, the busiest train bridge in the Western Hemisphere, “a chokepoint, a bottleneck, an Achilles’ heel on the Northeast Corridor.”

The 110-year-old swing bridge over the Hackensack River, owned by Amtrak Corp., opens about 100 times a year, and about 15% of the time “something goes wrong,” Biden said.

Occasionally, workers with sledgehammers have to beat the bridge closed, he said. “Literally a sledgehammer and knock it back into place, in the year 2021,” he said at a ceremonial groundbreaking for the bridge’s replacement. “Aging infrastructure like this is more than inconvenience or a nuisance — it’s an impediment.”

The replacement bridge is the first phase of the Gateway project, a massive bridge-and-tunnel expansion and renovation effort designed to double train capacity over the Hudson River.

Before the pandemic, about 820,000 rail passengers a day traveled to New York City or some other destination in the Northeast. The project’s sponsors have warned that a failure on the tracks that include the bridge would cause economic harm to a region that is key to 20% of the nation’s gross domestic product.

Biden’s trip is part of a series the White House scheduled to build public support for the president’s economic agenda, which includes increased spending on infrastructure and social programs. Biden told reporters earlier Oct. 25 he’s hopeful to strike a deal with congressional Democrats on the Build Back Better climate and welfare plan before he departs for a series of international meetings in Europe on Oct. 28.

“This initiative is about betting on America, about believing in America,” he said. “Let’s get this done, let’s move.”

Biden is trying to reach an agreement with moderates in the Senate who have objected to the price tag for the social spending legislation, initially proposed at $3.5 trillion over a decade. He met over the weekend with Sen. Joe Manchin (D-W.Va.) and Senate Majority Leader Chuck Schumer (D-N.Y.) as they sought a compromise agreement on a smaller version of the legislation.

Manchin said Oct. 25 that Democrats should be able to reach a deal this week on a framework for Biden’s economic agenda, though significant details still need to be worked out before any legislation is written.

Progressive Democrats in the House have said they will not vote for a separate, $1 trillion infrastructure bill that already passed the Senate in a bipartisan vote until an agreement on the larger social spending measure is reached.