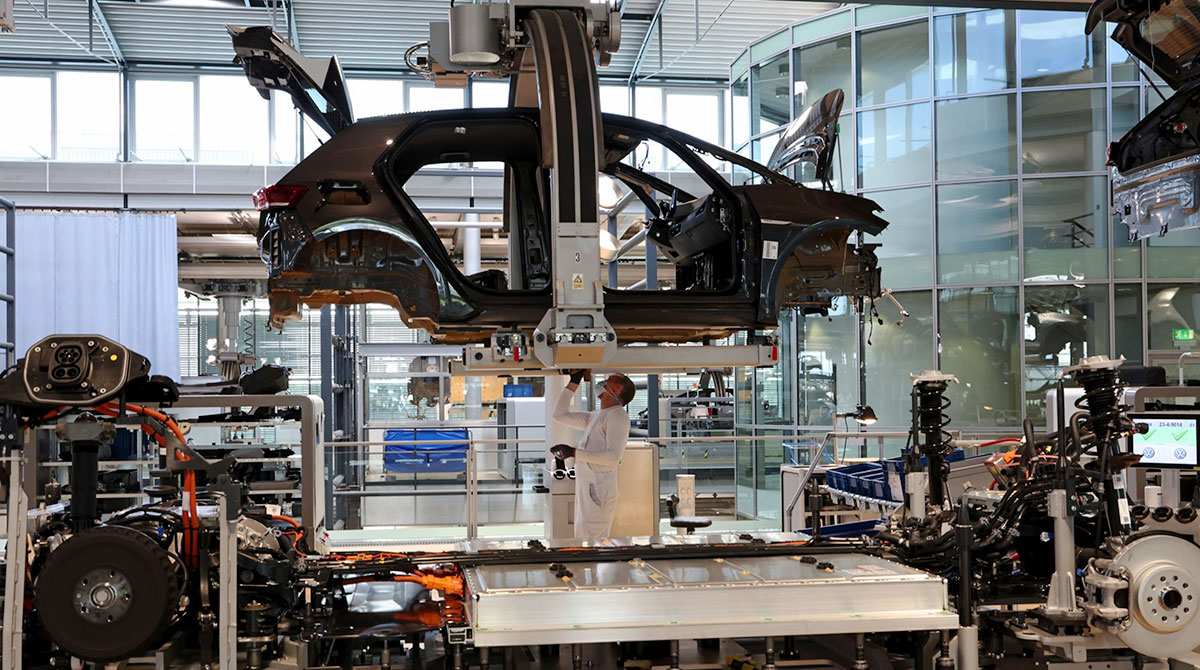 A worker prepares the undercarriage of a VW ID.3 electric automobile for battery pack installation at the automaker's factory in Dresden, Germany. (Liesa Johannssen-Koppitz/Bloomberg)

Carmakers including Volkswagen AG and General Motors Co. should brace for the global semiconductor shortage to last beyond next year and redesign cars so they need fewer of the high-tech components, consultancy Roland Berger said.

Severe bottlenecks will persist through 2022, analysts at the Munich-based firm said, in a departure from many automakers hoping that the crisis would ease in the second half of next year. Capacity will remain constrained in the long term as chipmakers aren’t investing in additional supply to make the older semiconductors typically used in today’s models.

Manufacturers should put even more effort into monitoring the chip industry to keep up with looming production snarls, the analysts said in a report.

“Most importantly, carmakers need to speed up the transition to centralized electronic architectures and thereby move to advanced and leading-edge nodes,” they said.

Since late last year, the chip shortage hasn’t let up, prompting vehicle production to plummet even below levels of last year when the pandemic kept buyers away from showrooms. After a third-quarter low in supplies, manufacturers including VW and Daimler AG have said they expect the situation to ease over coming months while others like Stellantis NV are digging in for longer disruptions.

A shift to a central design with one onboard computer controlling a range of functions could drastically cut the number of chips needed in a vehicle, Roland Berger said. Swapping out older platforms for new ones would also mean cars contain the latest generations of chips for which production capacity is increasing.

The crisis around the components could indicate more trouble ahead, according to AlixPartners, a consultancy that has put the cost of the crunch for the industry at $210 billion in lost sales this year. Resins, metals and rubber shortages are starting to take hold along with tight labor markets in some regions, Alexandre Marian, a managing director at AlixPartners in Paris said during an event this week.

“The supply of semiconductors should improve by the middle of next year,” Marian said. “But it’s the tree that’s hiding the forest and we’ll see other shortages emerging.”