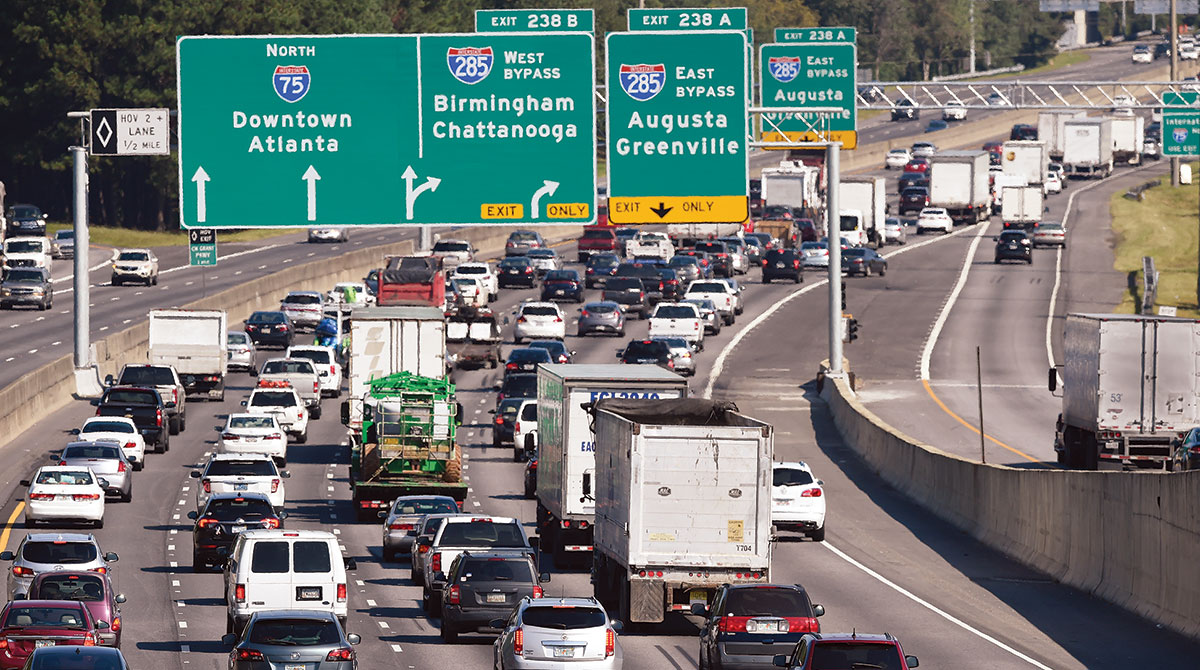 The intersection of I-75 and I-285 North in Atlanta. (Mike Stewart/Associated Press)

The Big A is the No. 1 city for spot market posts for van loads and refrigerated loads through the first half of 2018, according to DAT Solutions, the operator of a major freight load board marketplace for North America.

Atlanta led spot market posts for both categories for full-year 2017 as well.

This year, the trucking industry has set records for volumes and prices in spot markets, and June saw average national rates for each trailer type setting all-time highs, according to DAT.

Last year, Atlanta was the first market to top 2 million outbound van load posts. This year, 10 markets already are on a pace to bust through that level, DAT reported. The next four city areas in order were Charlotte, N.C., Houston, Memphis, Tenn., and Dallas.

The biggest mover in van loads was Richmond, Va., jumping from 25th in 2017 to 10th through June. Richmond is a shorthaul city, DAT notes, and it found that 57% of the outbound freight from Virginia’s capital is going to destinations within 300 miles of the city.

DAT Market Analyst Peggy Dorf said that Richmond and Allentown, Pa., which rose to sixth in van load posts from 12th last year, are benefiting from the growth of e-commerce.

“This is about same-day and next-day delivery,” Dorf said. “They want to be closer to the consumer and ensure that products in the warehouse are ready to go.”

Reefer load posts also have set records this year, with the top three markets on the road to topping more than 1 million outbound load posts. In 2017, no market surpassed that level. Following Atlanta in the top five list of cities for reefer load posts were Elizabeth, N.J., Dallas, Philadelphia and Houston.

Big movers to the upside in reefer posts include Miami, Lakeland, Fla., and McAllen, Texas.

“Florida is seeing more out-of-season and in-season produce, along with produce imports through Miami,” Dorf said. “Produce from Mexico is going through McAllen.”

DAT also released data on the top 10 markets for flatbed loads. Little Rock, Ark., led that list, followed by Shreveport, La., Jackson, Miss., and Houston. Little Rock has had more load posts in the first six months of 2018 than it did in all of 2017.

The ratio of loads to flatbed trucks in June was 86.1, or one truck for every 86 postings seeking a truck. In May, the flatbed ratio average was 99.2