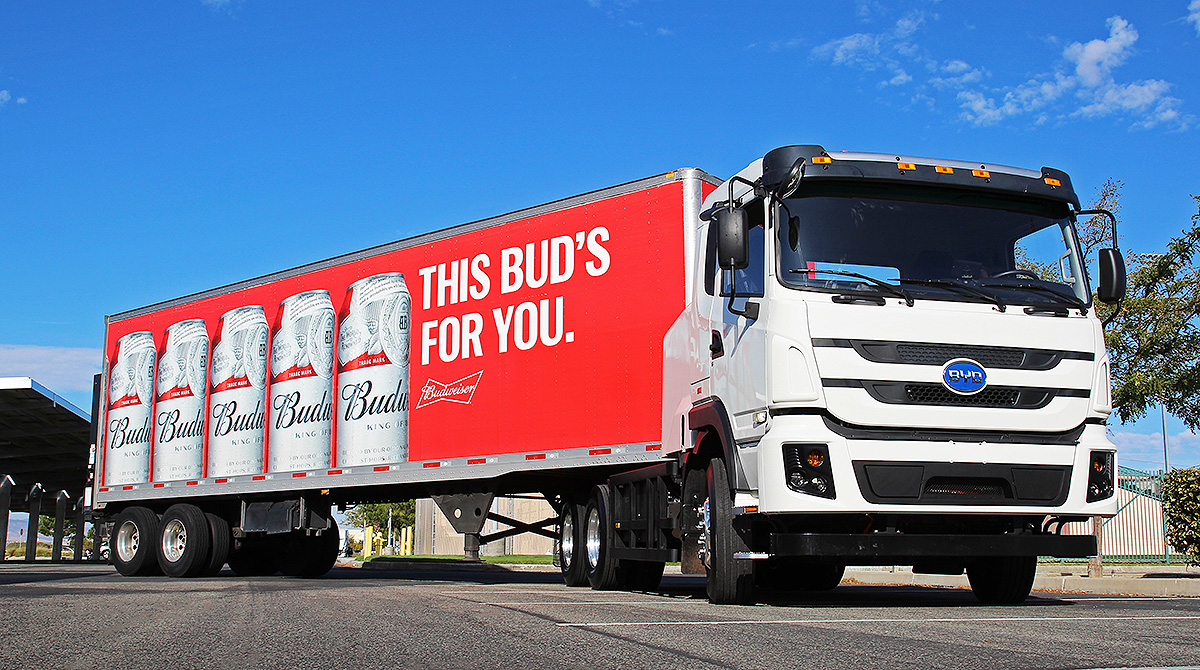 Beverage company Anheuser-Busch announced it will deploy 21 Class 8 battery-electric trucks in its California fleet as part of a state project to showcase economically and environmentally sustainable warehousing and distribution technology.

The trucks will be made by BYD Motors Inc., which called the deployment the largest Class 8 electric truck deployment in North America.

“At Anheuser-Busch, we are committed to leading our industry towards a more sustainable future by reducing our carbon emissions across our value chain by 25% by 2025,” Angie Slaughter, vice president of sustainability procurement for Anheuser-Busch, said in a release. “The transport industry is one that is prime for innovative solutions and we are excited to continue driving progress towards a zero-emission fleet through this partnership.”

The project includes equipment testing, a one-year demonstration period, data collection and associated reporting. The trucks are expected to begin operation near the end of 2019.

Engie Services U.S., a division of Engine Inc., will design and install charging infrastructure at all four facilities. Engie will also be installing and commissioning a 958.5 kW solar array at the Carson site, which will generate zero-emissions power to offset the use of conventional energy in the charging process, further reducing emissions and resource consumption, according to Los Angeles-based BYD.

The project is part of California Climate Investments, a statewide program that puts billions of cap-and-trade dollars to work reducing greenhouse gas emissions, strengthening the economy and improving public health and the environment, particularly in disadvantaged communities. The project is expected to result in emissions reductions of 910 metric tons of carbon dioxide per year, the equivalent of taking almost 200 passenger vehicles off of the road.

To facilitate the project, the California Air Resources Board awarded funds to the Center for Transportation and the Environment, a nonprofit, that will be responsible for project oversight, development, management and reporting during this deployment. CTE will also provide technical support, risk analysis and mitigation strategies, permitting, equipment and station deployment, training, and assistance with commissioning. 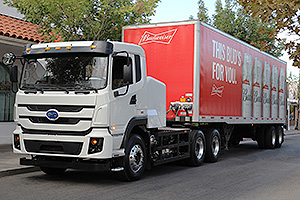 Meanwhile, ACT Research has forecast commercial electric vehicles will make up a significant share of the Class 4 through Class 8 market in 2030 to 2035. At this stage, however, the industry is taking a measured approach.

Daimler Trucks North America presented on Aug. 20 the first two of its Freightliner eCascadia electric models to Penske Truck Leasing and NFI. Each will put their truck into commercial applications.

Tesla and Nikola Motor Co. have announced plans for battery-electric Class 8 models. Tesla has shown a prototype to customers who placed orders, including 40 from Anheuser-Busch.

Nikola, which also is going to offer a heavy-duty hydrogen fuel-cell model, plans field tests of its trucks later this year, and production is expected in late 2022. Phoenix-based Nikola has reported preorders for about 14,000 trucks, including a Class 8 sleeper and day cab model as well as a cabover intended for Europe. Anheuser-Busch has preordered 800 of Nikola’s hydrogen fuel-cell trucks.