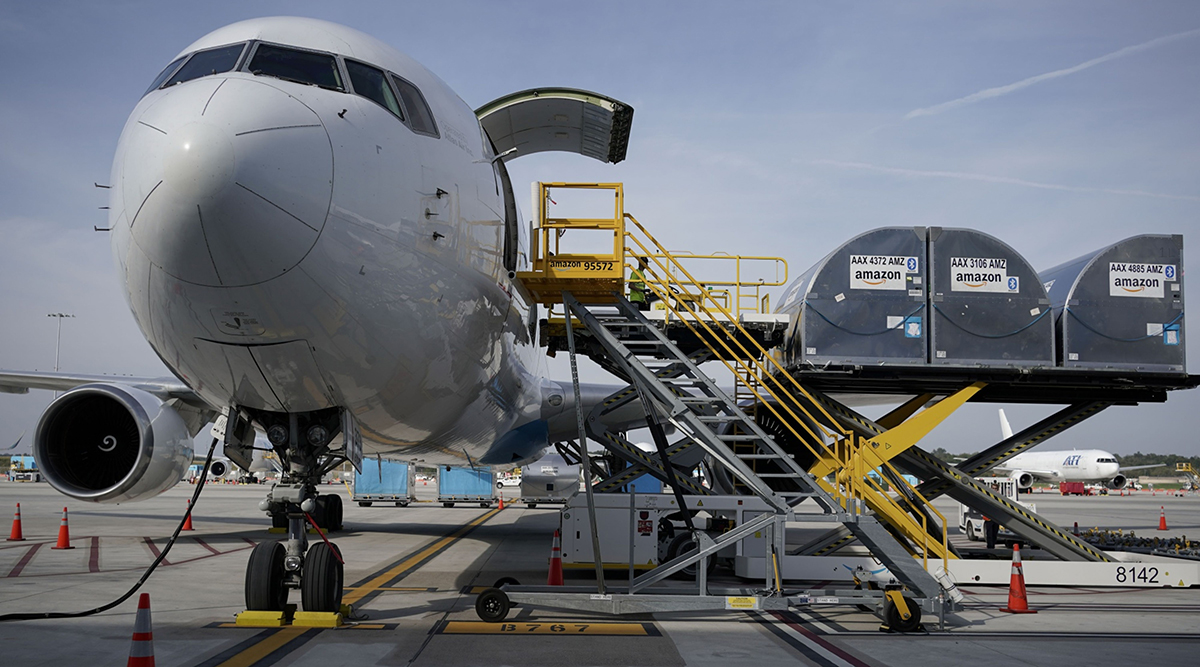 Cargo is loaded into an airplane at the Amazon Air Hub near Cincinnati. (Jeff Dean for Bloomberg News)

Amazon.com Inc. is talking up the size of its delivery operation to ease public alarm that a supply chain crisis could strangle holiday shopping.

In a corporate blog post Oct. 25, the world’s largest online retailer said it has expanded its roster of drivers, warehouses and planes to handle an expected crush of orders in the coming weeks, potentially giving Amazon a competitive advantage. The blog also provided new visibility into the company’s effort to get goods to shoppers itself, rather than relying on the U.S. Postal Service or UPS Inc.

John Felton, the senior vice president of worldwide delivery services, wrote that the company can draw on several hundred thousand delivery drivers worldwide. Some 260,000 are employed by the company’s startup-in-a-box Delivery Service Partners, supported by “hundreds of thousands” more Amazon Flex drivers, who make deliveries from their own vehicles.

The company says it now has more than 800 delivery stations — facilities typically located closer to shoppers than Amazon’s massive exurban fulfillment centers. Bloomberg reported last year that Amazon planned to build about 1,500 of these delivery hubs.

Amazon says it has started bringing inventory into its warehouses from additional ports, doubled its ability to process shipping containers and expanded its network of ocean freight carriers. Felton wrote that Amazon’s rapidly growing air cargo arm will have more than 85 aircraft “later this season.” Amazon also operates a pool of more than 50,000 trailers, driven by contractors, the company said Oct. 25.

“Our teams have been hard at work for months, focusing on capacity and demand planning to balance our customers’ needs against any supply chain or transportation challenges that may occur,” Felton wrote.

Amazon, which aims to hire some 150,000 seasonal workers, runs the risk of not having enough employees to meet demand in a tightening labor market, said Marc Wulfraat, president of MWPVL International Inc., a logistics consultancy.

But the company’s physical infrastructure represents a huge advantage over smaller rivals, he said on a conference call last week hosted by analysts with Jefferies. Amazon can store inventory in warehouses that serve as import way stations, an advantage shared by the likes of Walmart Inc., Target Corp., The Home Depot Inc. and Best Buy Co.

“The biggest, most powerful retailers will emerge from this relatively clean,” Wulfraat said. “It’s everybody else out there that depends on the holiday season that’s going to get hurt.”