A new project-planning application offers a way for companies, organizations and government entities to harmonize the often-varied requirements attached to long-range initiatives, including some that potentially affect the transportation industry.

The “Collablocation” app was the subject of a demonstration held Jan. 7 at the Transportation Research Board’s annual meeting. Participants in the hands-on workshop were assigned to use a collaborative geodesign approach to plan a theoretical network of compressed natural gas stations in the southwest United States. The program was led by Michael Kuby, a professor at the School of Geographical Science and Urban Planning at Arizona State University.

Collablocation allows multiple users to collaborate as they simultaneously create, store, evaluate, display and import data specific to a project. Such systems have been used previously for land use planning, but Kuby said the TRB demonstration was believed to be the first time it has been used for facilities such as fuel stations. The app is a geographic information systems (GIS) management tool that is built with the free, open-source Shinyapps application program. 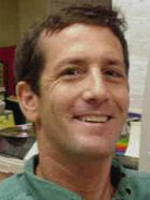 Workshop participants used a map of the Southwest that overlaid interstate and trucking routes with truck stops, fleet locations, the number of trucks registered in a ZIP code, freight tonnage movement, and natural gas pipe infrastructure. Participants then used a range of 250 miles as the distance between the proposed stations. In Phase 1 of the exercise, teams were allowed to place stations at their discretion. Phase 2 required teams to reduce their network to 10 stations.

Workshop organizer Keiron Bailey, an associate professor of geography at the University of Arizona, said the Collablocation app could be used by federal, state and local planners, along with logistics firms, truck manufacturers, natural gas suppliers, truck stop owners and fueling firms.

Creation of a CNG fueling network was selected as an exercise because of the fuel’s environmental benefits, including reduction of greenhouse gas emissions, and also because of its wider availability compared with other alternatives, such as electric battery power, Kuby said.

There was no right or wrong answer for placement of the fuel stations, but the workshop demonstrated that many parties can be impacted during development of such a major undertaking. The app allowed for users to access infrastructure necessary to build the network.

“The idea is that by the end of the workshop you may not have a concrete plan, but you have moved the ball along much further with people moving in tandem,” Kuby said.

TRB’s 97th annual meeting, which ran from Jan. 7 to Jan. 11, brought together more than 13,000 industry stakeholders including researchers, academicians, policymakers and administrators.

Nearly 49% of CMV Drivers Could Be at Risk for Sleep Apnea, Study Says