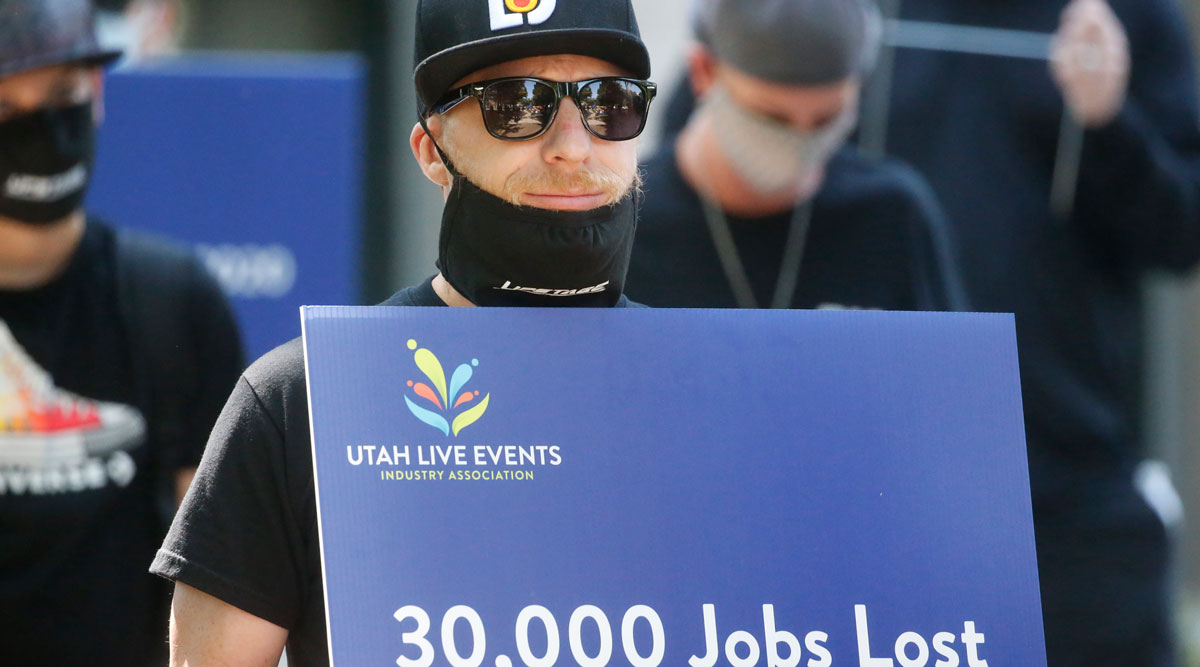 Events workers who were forced out of work because of the pandemic marched July 21 in Salt Lake City. (Rick Bowmer/Associated Press)

WASHINGTON — The number of laid-off Americans seeking unemployment benefits rose last week for the first time since the pandemic struck in March, evidence of the deepening economic pain the outbreak is causing to the economy.

The rise in weekly jobless claims to 1.4 million underscores the outsize role the unemployment insurance system is playing among the nation’s safety net programs — just when a $600 weekly federal aid payment for the jobless is set to expire at the end of this week.

All told, the Labor Department said July 23 that roughly 32 million people are receiving unemployment benefits, though that figure could include double-counting by some states. Some economists say the figure is likely closer to 25 million.

Last week’s pace of unemployment applications — the 18th straight week it’s topped 1 million — was up from 1.3 million the previous week. Before the pandemic, the number of weekly applications had never exceeded 700,000.

An additional 975,000 applied for jobless aid under a separate program that has made self-employed and gig workers eligible for the first time. That figure isn’t adjusted for seasonal trends, so it’s reported separately. 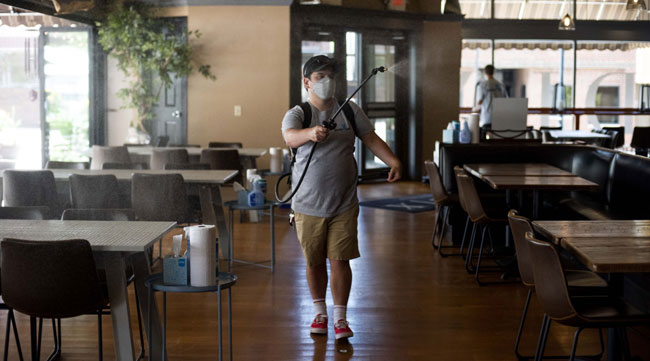 A worker sprays sanitizing disinfectant in the dining area of a restaurant in Ohio on July 13. (Ty Wright/Bloomberg News)

The resurgence of confirmed viral cases across the country has forced some businesses to close a second time or to impose tighter restrictions on customers in response to state mandates. The resulting pullback in business activity has hindered job growth and likely forced additional layoffs.

The federal government’s $600 weekly benefit for laid-off workers — which is in addition to whatever jobless aid a state provides — is the last major source of economic help from the $2 trillion relief package that Congress approved in March. A small business lending program and one-time $1,200 payment have largely run their course.

Members of Congress are negotiating another aid package that might extend the $600 benefit, though likely at a lower level. Because of the $600 weekly federal benefit, roughly two-thirds of the unemployed are receiving more in aid than they earned at their former jobs, research has shown — a finding that’s led Republicans to argue that it is discouraging people from returning to work.

Yet the additional money also has been a key source of support for people who lost jobs that no longer exist or who fear being infected by the virus if they return to work. 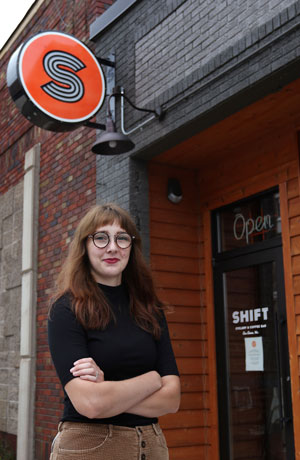 Liz Carey, an employee of SHIFT Cydery & Coffee Bar, has been out of work since the shop closed in March. (Dan Reiland/The Eau Claire Leader-Telegram via AP)

The federal jobless aid also has helped buttress the overall economy. Unemployment aid accounted for 6% of all U.S. income in May, a greater share than even Social Security. Economists say it’s one reason why retail spending rebounded as quickly as it did in May and June, helping fuel a modest economic rebound.

With confirmed cases of the coronavirus having risen in 46 states compared with two weeks ago, economists say they’re increasingly worried that any recovery is now in jeopardy. Twenty-two states have paused or reversed the re-opening of businesses, according to economists at Bank of America.

Real-time measures of the economy suggest that companies are pulling back on hiring and that more small businesses are closing permanently. Credit card spending has been stuck at about 10% below year-ago levels for nearly a month, according to JPMorgan Chase, after having risen steadily from mid-April to mid-June.

And a weekly survey by the Census Bureau found that the number of people with jobs dropped 6.7 million in mid-July compared with a month earlier, a sign that employers imposed layoffs, suspended hiring or both.

In May and June, businesses had rehired enough to more than offset the wave of layoffs. But the Census data now suggests that the economy is losing jobs again.

Data from the consumer-review website Yelp, which tracks millions of small businesses, shows that more companies are permanently shutting down. Nearly 73,000 small businesses have closed for good since the pandemic intensified in March, up 28% from mid-June.

“Every time a business closes, that makes the recovery longer and harder, so that worries me,” said Ernie Tedeschi, an economist at the investment bank Evercore ISI.

Many of the unemployed say they fear that a slow and prolonged recovery would be hard to survive without the $600 weekly aid from the federal government. If that payment were eliminated, total unemployment benefits would shrink by one-half to two-thirds, depending on a recipient’s state.

Melissa Bennett has been using the federal jobless benefit to help pay her $1,900 monthly health insurance bill, which she’s paid on her own since losing her employer-sponsored plan in June. That’s when she was laid off from her front desk job at a vacation time-share rental in Myrtle Beach, S.C., a beach town that has become a COVID-19 hotspot.

Without the $600, her unemployment benefit will fall to just $200 a week, and she’ll have to decide whether to pay her mortgage or her utilities first.

Many analysts say they worry that the expiration of the federal payments will cause a wave of evictions of renters who won’t be able to afford their monthly payments. Even before the pandemic, spiking rents in most major cities were squeezing the finances of lower-income families.

One in four renters — 11 million households — were spending more than half their income on rent before the recession, said Priscilla Aldomovar, CEO of Enterprise Community Partners, a nonprofit group focused on affordable housing.

Enterprise owns 13,000 rental units, and Aldomovar said that so far, the renters have largely kept up with their payments, which she attributes to the federal aid.

“It’s very precarious, but it’s been held together by the stimulus,” she said.