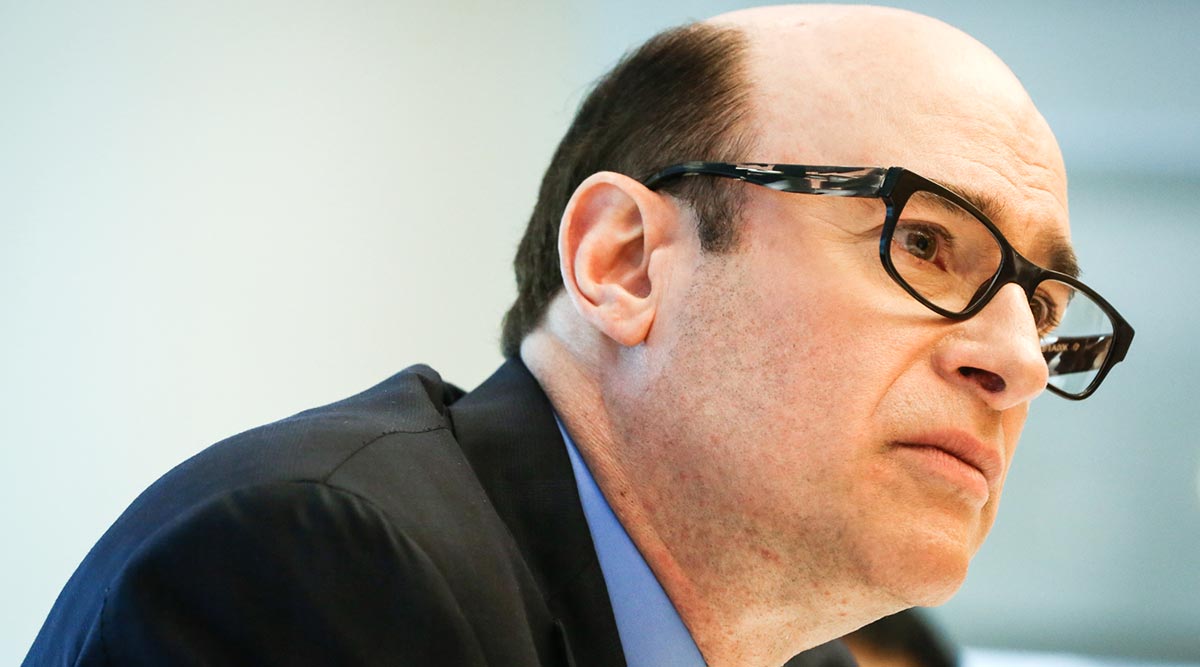 After building a fortune and several businesses by buying company after company, XPO Logistics Inc. CEO Brad Jacobs is abandoning acquisitions, a principal reason many investors bought into the stock.

Jacobs in mid-2017 declared that the trucking and warehouse services company had the firepower to spend as much as $8 billion on the right deal. But he began to walk back such talk last year, noting the high prices of potential targets. He has now slammed the acquisition door shut.

“The best M&A target is acquiring our own stock,” Jacobs said on a Feb. 15 call with analysts, citing XPO’s bargain price relative to potential targets. “That’s where we’re going to deploy the resources for the foreseeable future, not on external M&A.”

XPO Logistics is No. 1 on the Transport Topics list of the top 50 logistics companies in North America.

The new tack poses a risk for XPO as its acquisition appetite made the company one of the few transportation stocks to attract growth-hungry investors. Jacobs won fans after paying $150 million for a controlling stake in 2011, then driving XPO’s valuation to more than $14 billion through 17 acquisitions. The deal pause also raises questions about whether the 62-year-old — known for building up companies with deals — might be getting ready to move on.

“The tone of the conversation around M&A had been evolving and changing as the year wore on,” Stifel Nicolaus analyst Bruce Chan said. “But given the comments on this call, there’s final closure on the fact that it’s not going to happen.” 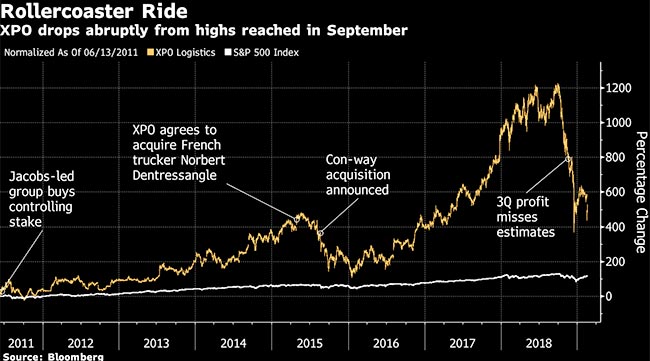 XPO climbed 3.9% to $54 at 10:59 a.m. in New York, making up only part of a 13% drop Feb. 15. The shares plunged 55% through last week from their September peak, wiping out $8.86 billion in market value. The shares were pummeled in December by a short-seller’s report, then hit again last week when XPO slashed its revenue forecast, blaming weak European results and lost business from a major customer, widely believed to be Amazon.com.

The cheap stock spurred Jacobs to redeploy resources. The company in December announced a $1 billion share-buyback program, which was exhausted by Feb. 4. Less than two weeks later, XPO adopted a new $1.5 billion repurchase plan. The company on Feb. 19 announced it would sell $1 billion in bonds, in part to fund buybacks.

This acquisition hiatus isn’t XPO’s first. The company took a pause in 2015 to integrate and pay down debt after spending $5 billion to purchase two companies. Within two years, Jacobs declared that lull was over and sold equity for $665 million to resume making deals.

The latest pivot to buying back stock appears likely to last longer, especially after Jacobs said the company’s search for a chief financial officer no longer requires experience in acquisitions.

“There is a transition in the narrative around XPO from acquisitions and high growth to maybe a little bit more of self help. And now it’s actually going to be a lot more of rebuilding more than anything else, given the recent developments,” said Todd Fowler, an analyst at Keybanc Capital Markets.

Jacobs’ zeal for the deal has led to more than 500 acquisitions as he built and sold four companies — including United Rentals Inc. and a trash collector subsequently bought by Waste Management Inc. — before taking over XPO.

Fowler wonders what Jacobs’ next move will be if he’s no longer chasing deals. Will Jacobs — who has a net worth of about $1.5 billion, according to the Bloomberg Billionaires Index — exit or stick around long enough to regain XPO’s footing and stock price? Will XPO be the last company Jacobs builds?

“I’ve always felt that he’s enjoyed the thrill of the hunt more than the capture itself,” Fowler said.

Jacobs said he plans to stay.

“This is my dream job. I’m completely committed to the success of XPO,” he said by e-mail. “I am all in. I’m not going anywhere.”