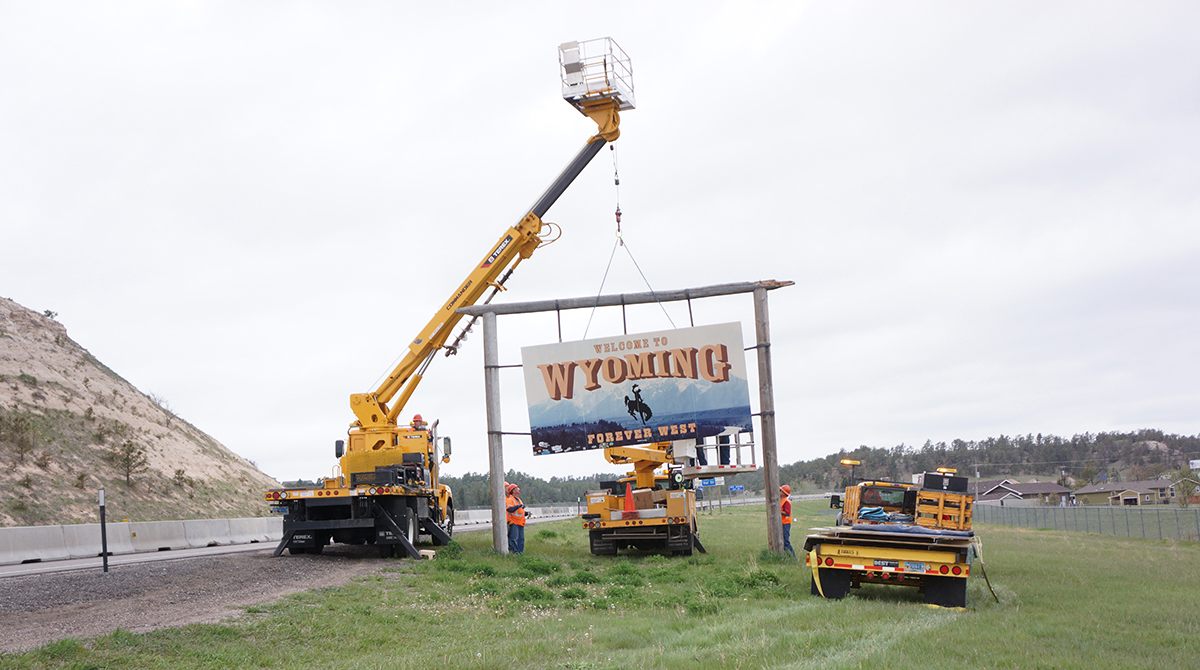 The Wyoming Department of Transportation is placing the $33,005 it made from auctioning decommissioned road signs into its highway repair fund.

Although the money will supplement the repair fund, WYDOT spokesman Doug McGee said the agency has not earmarked it for any specific projects yet.

WYDOT recently conducted a fundraising effort in which the agency sold five signs to members of the public. Each 4-by-8 foot sign, which reads “Welcome to Wyoming”, stood alongside a highway when it was in use. McGee said department officials spent late September and early October connecting winning bidders to their signs, but the auction took place online from July 31 to Aug. 14.

The signs are switched out every eight years to coincide with the changing of the image on the state’s license plate.

In the past, WYDOT has recycled the signs. McGee said reading about other states that had auctioned their highway signs led him and his colleagues to create such an initiative for Wyoming.

“I thought, if it works for other states, maybe we should try it,” McGee said. “[We] divided the state into five districts. The signs are pretty well-damaged by the end of their life, so we thought we’d be lucky to find one sign from each district, so that way people could have the opportunity to bid on a sign from their part of the state.”

Wyoming Trucking Association Managing Director Sheila Foertsch commended WYDOT for “thinking outside the box” on ways to increase the state’s highway fund. According to WYDOT’s operating budget for fiscal 2018, highway improvement and contract maintenance comprise more than $302 million, or 51.9%, of the state’s projected expenditures.

“As a rural state, adequate highway funding continues to be a challenge and efforts to supplement the funds that WYDOT receives through the regular funding measures at every level are important,” Foertsch said.

Dozens of people bid on the signs, which were identical and started $100. The signs were auctioned via Public Surplus, a site through which WYDOT and other public agencies sell items ranging from industrial equipment to electronics. Three bidders claimed the five signs, McGee said.

According to WYDOT, $10,000 was the highest sum. Nokene Wright, from Wright, outbid 16 others for the sign, which overlooked state Highway 24 at the border of Wyoming and South Dakota. Wright also had the winning bid of $6,900 for a sign that was used along the Wyoming-Nebraska border.

Tiffany Gamble, of Casper, placed a high bid of $4,405 for a sign that once stood along U.S. Route 26 in southeast Wyoming. According to WYDOT, Gamble will display her sign at the Casper-based Hat Six Travel Center, for which she serves as business adviser.

She said she hopes people will get their picture taken with the sign, which will be an addition to the center's existing attractions, which include two large model dinosaurs.

"I envision it being just like it would on the interstate," Gamble said. "We love Wyoming. We are Wyoming people. We just knew we had to have it."

Not all the winners hail from Wyoming. Rick Mollner of Appleton, Wis., won the remaining two highway signs, which he purchased for $6,600 and $5,100, respectively. McGee said Mollner drove from Wisconsin to Wyoming in his pickup truck to retrieve his signs.

“Anybody in the world could bid on them,” McGee said. “You have to pick them up or arrange to ship them at your cost.”

This year was the first time WYDOT auctioned its signs, but McGee said the agency has received requests from members of the public to buy the signs over the past 15 years.

“It’s possible WYDOT will do another auction," WYDOT spokeswoman Aimee Inama said, "but we don’t have anything planned as of yet.”