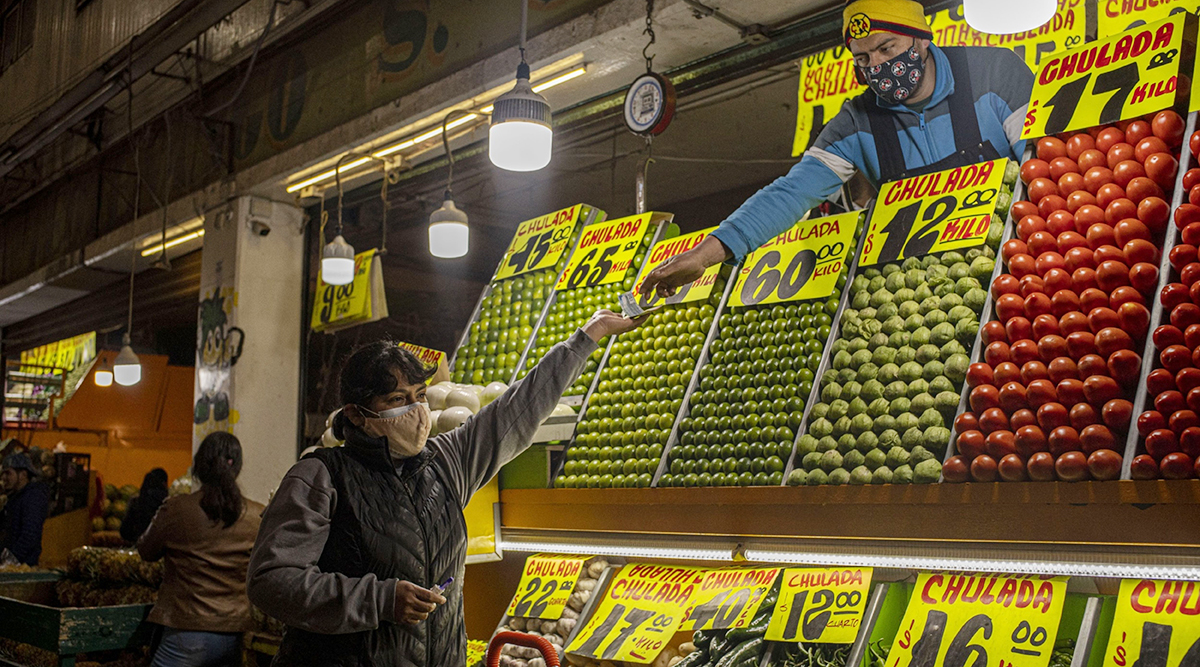 A vegetable vendor hands change back to a customer at the Central de Abastos Market in Mexico City, Mexico. (Alejandro Cegarra/Bloomberg News)

Prices for some of the world’s most pivotal products — foods, fuels, plastics, metals — are spiking beyond what many buyers can afford. That’s forcing consumers to cut back and, if the trend grows, may tip economies already buffeted by pandemic and war back into recession.

Global food prices set a record last month, according to the United Nations, as Russia’s invasion of Ukraine disrupted shipments from the countries that, together, supply one-quarter of the world’s grain and much of its cooking oil. More expensive food may be frustrating to the middle class, but it’s devastating to communities trying to claw their way out of poverty. For some, “demand destruction” will be a bloodless way to say “hunger.”

In the developed world, the squeeze between higher energy and food costs could force households to cut discretionary spending — evenings out, vacations, the latest iPhone or PlayStation. China’s decision to put its top steelmaking hub under COVID-19 lockdown could limit supply and push up prices for big-ticket items such as home appliances and cars. Electric vehicles from Tesla Inc., Volkswagen AG and General Motors Co. may be the future of transportation, except the lithium in their batteries is almost 500% more expensive than a year ago.

“Altogether, it signals what could turn into a recession,” said Kenneth Medlock III, senior director of the Center for Energy Studies at Rice University’s Baker Institute for Public Policy. 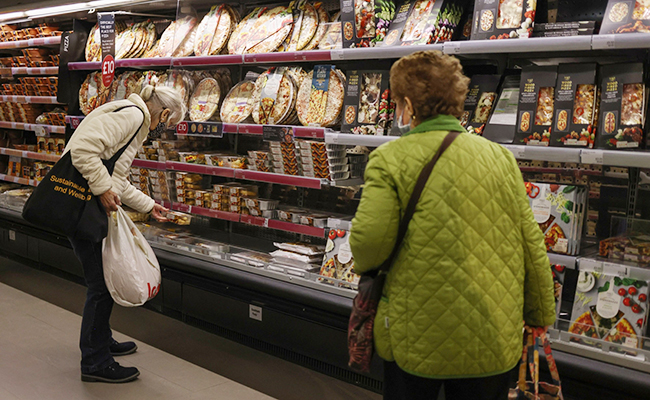 The International Monetary Fund is poised to cut its global growth forecast because of the war, and it sees recession risks in an increasing number of countries, Managing Director Kristalina Georgieva said. The world economy still is set to expand this year, though by less than the 4.4% previously anticipated, Georgieva said in an interview with Foreign Policy magazine.

Federal Reserve Chair Jerome Powell said Russia’s invasion of Ukraine is aggravating inflation pressures by boosting prices on food, energy and other commodities “at a time of already too high inflation.” Curbing high inflation is a top priority, and the central bank is prepared to raise interest rates by a half percentage-point at its next meeting if needed, he said.

The danger is more acute in Europe, where energy bills are soaring due to a reliance on Russian supplies. Natural gas prices on the continent are six times higher than a year ago, and electricity costs almost five times more.

Those prices may fuse with the conflict raging on the European Union’s doorstep to make businesses and households averse to all kinds of spending. The U.K. downgraded its economic forecast to 3.8% from 6% as consumers face the worst squeeze on living standards in at least six decades.

“There’s little doubt that inflation’s going to stay higher for longer as a result of the war in Ukraine,” said James Smith, a London-based economist for developed markets at ING. “A renewed spike in gas prices would see demand destruction become more widespread.”

The dynamic is playing out in products as ubiquitous as oil and as specialized as lithium, a key ingredient in advanced batteries for consumer electronics and plug-in cars. Battery makers in China paying five times more for the metal than a year ago have to pass some of that cost on to car companies, potentially slowing EV sales. 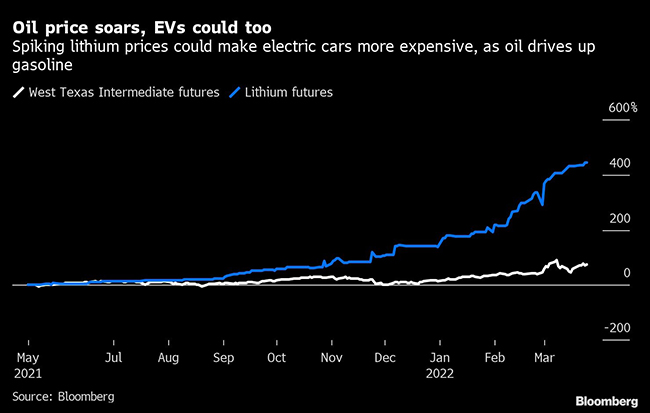 “The pressure is on the automakers,” said Maria Ma, an analyst at Shanghai Metals Market. “What worries the market now is that the EV sales in the next couple months may stay flat or may not perform very well after the price adjustments.”

American consumers and businesses are more insulated from surging fuel prices since the country doesn’t rely heavily on Russian oil or natural gas, but they’re not immune. Crude oil prices in the U.S. soared in January and February as the threat of war grew, and retail gas prices followed, setting a nominal record of $4.31 for a gallon of regular. In Los Angeles, the average now tops $6.

Still, demand isn’t budging. It’s about 4% higher than this time last year, the U.S. Energy Information Administration said. That may reflect how Americans cooped up by years of restrictions are intent on traveling.

“That has skewed everything,” said Andrew Gross, a spokesman for Florida-based AAA. “Had there not been a pandemic, these high prices might crush demand.”

If oil prices stay high for a sustained level, demand destruction looms. JPMorgan Chase & Co. trimmed its second-quarter global demand forecast by 1.1 million barrels a day and reduced the outlook for both of the remaining quarters by about 500,000 barrels. Europe accounts for most of the cuts.

“Whether it’s motorists in filling up their cars, or heating or cooling their houses, this is a level that consumers have started to push back a little bit, and we’ve seen demand destruction in the past,” ConocoPhillips CEO Ryan Lance said March 8 on Bloomberg TV. “People start conserving and changing their behavior.”

Gary Hamilton, owner of an independent trucking company in Frankford, Mo., is weighing whether to suspend operations until costs drop. Diesel there averages $4.67 a gallon, according to AAA, and if prices climb above $5.25, that’s enough for him.

Part of the problem is he doesn’t set his own prices; the agribusinesses he hauls for do. If he asks for higher rates as fuel prices rise, they’ll just “call the next guy,” he said.

“Fuel is killing us,” Hamilton said. “It’d be cheaper for us to park our trucks and potentially lay off employees than to just keep going.”