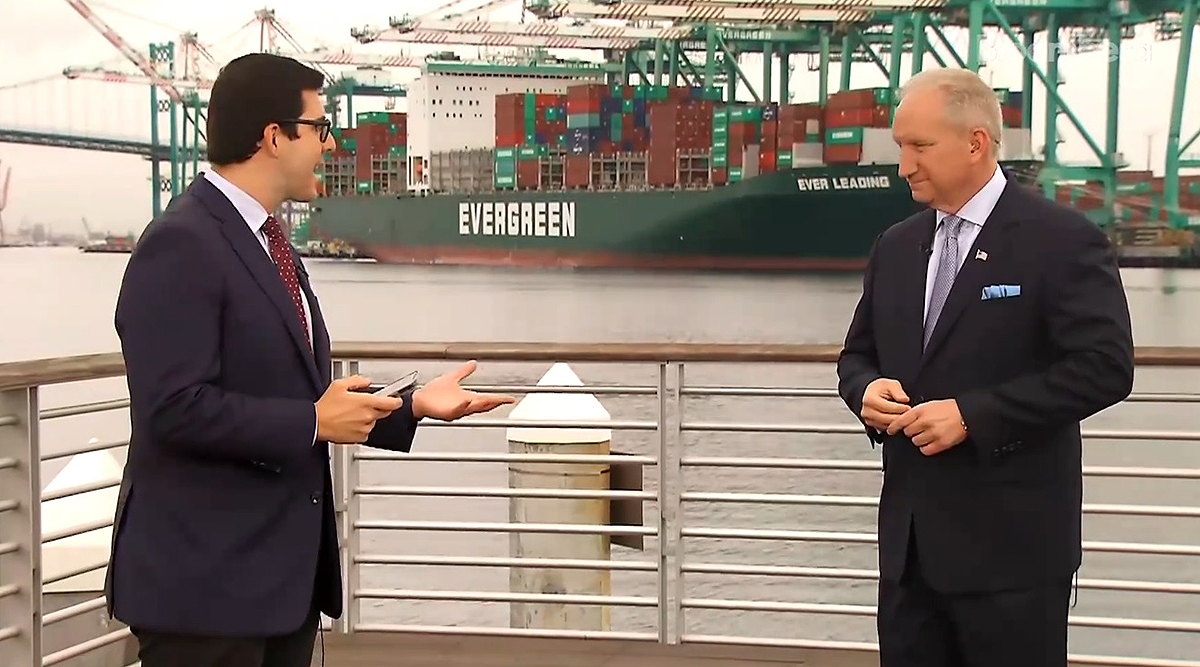 Seroka (right, with Bloomberg's Ed Ludlow) says truck capacity has been a stumbling block, with only 50% of registered truck drivers calling to the port at least once a week. (Bloomberg Television)

The federal government needs to invest more in West Coast ports, said the head of the Port of Los Angeles, which is the nation’s biggest gateway to Asia and is grappling with record backlogs.

The government has invested about $11 billion in the East Coast and Gulf Coast compared with roughly $1 billion in the West Coast over the past decade, Gene Seroka said in a Bloomberg Television interview (below) Sept. 27.

The pandemic has thrown the vital world of logistics into a tailspin, spurring delivery delays and goods shortages. Vessels are lining up outside ports because inward-bound shipments are pouring into the world’s largest economy just as inland transportation — like trucking and railroads — contends with its own bottlenecks. Shipping containers aren’t moving fast enough to distribution centers and warehouses — where space is lacking — to keep the supply chain running smoothly. 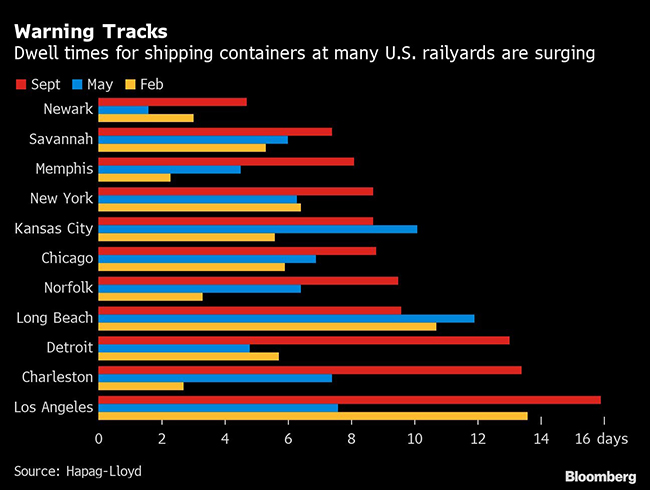 Truck capacity has been a stumbling block, with only 50% of registered truck drivers calling to the port at least once a week, said Seroka. He said 30% of truck appointments go unused every day.

For the upcoming holiday season, many retailers have pulled forward inventory, he said. “I feel confident the retail community will rise to the occasion.”

Global supply chain issues are likely to last until “at least” February or March next year, with the backlog taking even longer to resolve, Jim Monkmeyer, the president of transportation for Deutsche Post AG’s DHL Supply Chain unit, said in a separate Bloomberg Television interview.

In the U.S. specifically, the logistics market will see “ups and downs for the next year, at least,” with a lack of labor being a key constraint, he said. “We’ve got to pay more,” Monkmeyer said.

The Biden administration in June released a multipronged strategy to secure critical supply chains in products ranging from medicines to microchips. In August, it appointed former Deputy Transportation Secretary John Porcari as port envoy to the task force looking at easing the congestion.

The administration has also negotiated a record $17 billion in investments in port infrastructure as part of the bipartisan infrastructure deal, which will likely go to a vote by the House on Sept. 30. The funds would help address congestion and supply chains over time by investing in repair and maintenance backlogs and reduce congestion and emissions near ports.

Imports to Port of L.A. Drop, Hinting at Weaker Demand