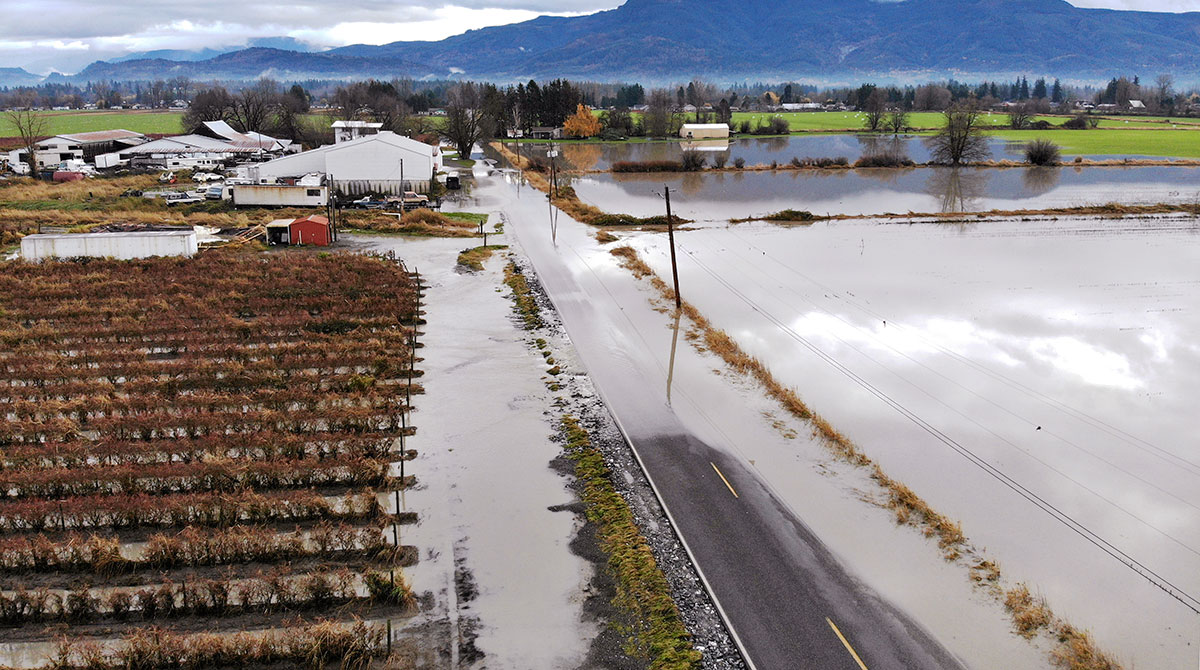 In this photo taken from a drone, farm fields and a road remain flooded near Sumas, Wash. (Elaine Thompson/Associated Press)

Localized flooding in Washington state from another in a series of rainstorms doesn’t appear to be as severe as an extreme weather flooding event earlier in the month.

People in the small communities of Sumas and Everson in northwest Washington had been asked to evacuate voluntarily Nov. 27. Both towns near the Canadian border previously saw hundreds evacuated and severe flooding from days of rain that caused an estimated $50 million in damage to Whatcom County.

In Sumas, officials used the flood siren at around 9 a.m. Nov. 29 and urged people to shelter in place as water bypassed the Cherry Street bridge and then spread through town, albeit somewhat slowly, according to a post on Facebook.

On Nov. 29, Sumas officials said there was a lot of water around town, but that the water level had started to slowly drop.

Scenes of yet more flooding in Sumas, Washington (courtesy @wsdot)

“We believe that this will continue to happen throughout the rest of the day,” officials said on Facebook.

On Nov. 28, Everson Mayor John Perry posted on Facebook that water levels on a main road through town were “slowly receding” and that Nooksack River levels were dropping.

“It appears that we are through the worst of it for the Everson/Nooksack area,” Perry wrote.

Many local roads in the area and around Bellingham were closed Nov. 28-29 because of water over the roadway and some schools in the region kept students from classes as a safety precaution. A landslide Nov. 28 blocked part of northbound Interstate 5 south of Bellingham and officials said an increased threat of landslides will remain for several days.

“The impacts to water quality as the result of the need for sewage overflow are expected to be minimal,” a city news release said.

Downstream in Ferndale, Mayor Greg Hansen told The Bellingham Herald several homes in low-lying areas near the river have seen flooding in latest storm, but the swollen river remains below its levee, he said.

“It definitely has filled the floodways,” Hansen said.

More rain was forecast for Nov. 30, the latest deluge from atmospheric rivers — huge plumes of moisture extending over the Pacific and into the Northwest.

Forecasters say the rainfall totals should be less than previous storms, with up to 2 inches expected in northwest Washington and up to 4 inches in the Olympic and Cascade Mountains.

With 18.91 inches of rain recorded at Seattle-Tacoma International Airport between Sept. 1 and Nov. 28, and the impending rain Nov. 30 could have the wettest early fall on record, The Seattle Times reported.

The second wettest September-through-November period in Seattle was recorded in 2006, with 18.61 inches of rain, according to the National Weather Service in Seattle.

“It’s the wettest early fall we’ve had in Seattle in a long, long time,” weather service meteorologist Kirby Cook said Nov. 29. “And in some areas, like Bellingham, it will be the wettest November on record.”

Ferndale’s mayor said the city’s Emergency Operations Center would remain open through the end of the week because of the anticipated Nov. 30 storm.

“We know we have significant rain coming and we are anticipating another river crest,” Hansen said. “We’re going to continue to stay in a heightened alert status.”