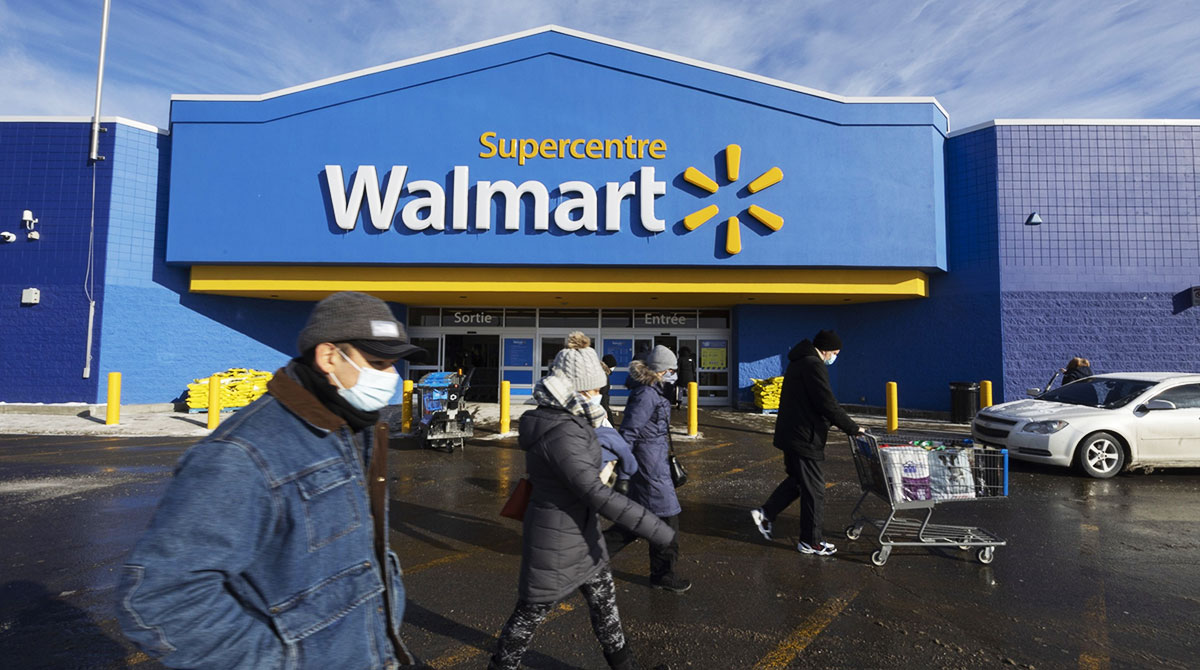 Shoppers outside a Walmart store in Montreal, Quebec. (Christinne Muschi/Bloomberg)

Comparable sales at U.S. Walmart stores will gain “slightly above 3%” excluding fuel during the current fiscal year, which ends in early 2023, the retailer said in a statement Feb. 17 as it reported earnings. That tops the 2.7% average gain expected by analysts.

The results underscore Walmart’s efforts to navigate scarce transportation capacity, a labor squeeze and rising fuel costs that are combining with robust demand to spur the fastest growth in U.S. consumer prices in four decades. U.S. retail sales in January rose the most in 10 months, signaling resilient demand despite surging inflation and the weakest consumer confidence in a decade.

Walmart is ranked No. 3 on the Transport Topics Top 100 list of the largest private carriers in North America.

Walmart Chief Financial Officer Brett Biggs said on a conference call with analysts that the company expects U.S. consumers to remain in a “generally favorable economic position throughout the year.”

Walmart had fallen 7.7% this year through Feb. 16, compared with a 2.4% drop in an S&P index of consumer staples companies. Last year, the shares dramatically underperformed retail stock indexes and rivals such as Target Corp. and Costco Wholesale Corp.

The results show how investors are rewarding companies that can navigate rising inflation and supply chain pressures. They are likely to be seen as a bellwether as other large U.S. retailers prepare to release earnings. Home Depot Inc., Macy’s Inc. and Lowe’s Cos. report next week, followed the week after by Target, Costco and Best Buy Co. 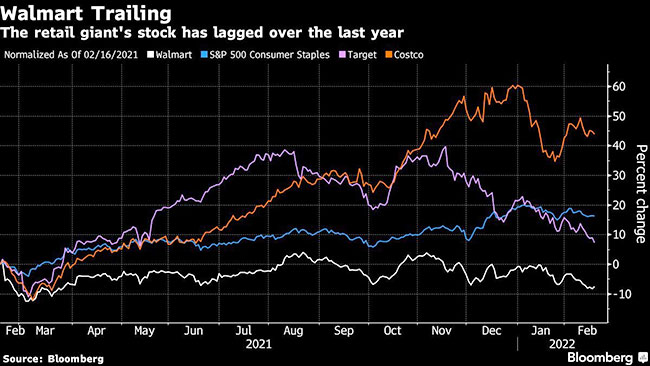 Walmart’s adjusted earnings climbed to $1.53 a share in the fiscal fourth quarter, which ended in late January. That topped the $1.51 average of analyst estimates compiled by Bloomberg. Revenue rose 0.5% to $152.9 billion, while Wall Street had expected $151.7 billion.

The Bentonville, Ark.-based retailer, which for decades has based its strategy on everyday low prices, is vying for more customers as the rising inflation rate prompts shoppers to look harder for bargains. But higher costs for merchandise, transportation and labor pose a growing threat to profitability.

That’s raising the stakes as Walmart and other retailers decide how much of vendor price increases they will pass along to consumers. Last quarter, comparable sales at Walmart’s U.S. stores rose 5.6% with market share gains in the grocery business, while analysts had predicted 5.5%.

Walmart is also trying to develop businesses in digital advertising, financial services and health care, and it’s investing heavily in e-commerce. The company is planning capital expenditures in the current fiscal year to be at the upper end of 2.5% to 3% of net sales with a focus on supply chain, automation, customer-facing initiatives and technology.

Walmart’s U.S. e-commerce sales, a closely watched metric, rose 1% in the fourth quarter while analysts were looking for a 2.2% gain. Online sales got a substantial boost during pandemic lockdowns, but demand has been slowing as shoppers venture back into stores.

To further boost its e-commerce business, the retailer last year debuted Walmart+, an online subscription offering, to compete with Amazon.com Inc.’s Prime program. Walmart has said little about the initiative’s performance, even downplaying its importance.