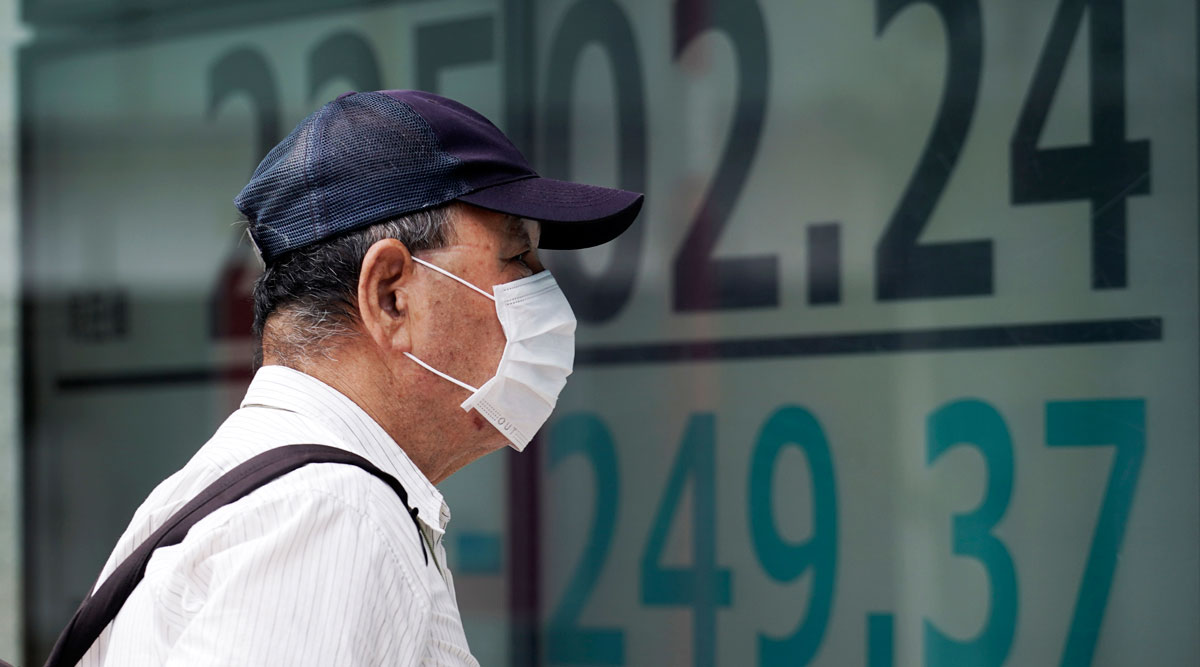 A masked man looks at an electronic stock board in Tokyo on July 27. (Eugene Hoshiko/Associated Press)

NEW YORK — Wall Street’s rally got back on track July 27, while gold rushed to a record at the start of a week packed with potentially market-moving events.

The S&P 500 rose 0.7% to more than recover all its losses from last week, as Apple and other tech giants returned to their winning ways. Nervousness was still hanging over markets, though, and gold shot up to touch its highest price ever.

“If there ever was a week to pay attention, this is likely the one,” Kevin Giddis, chief fixed income strategist at Raymond James, wrote in a report. “There is as much going on for the markets as there has been since the crisis began, and almost all of it has some potential meaning on the future of the U.S. economy.”

At the head of the pack is a two-day meeting for the Federal Reserve on interest rates that begins July 28. The Fed helped end the market’s sell-off in March, catapulting it into a tremendous rally, after promising to keep interest rates at record lows and to hoover up a wide range of bonds to support the economy. Investors are waiting to hear what the Fed says this week about the economy’s prospects and what it plans to do on interest rates.

This week is also a busy one for corporate earnings, with more than a third of the companies in the S&P 500 scheduled to report how they fared from April through June.

So far, profit reports have been better than Wall Street forecast, though still far weaker than a year earlier because of the recession. Companies that have reported results topping expectations, though, have been getting a smaller bump than usual versus the rest of the market the following day, analysts wrote in a BofA Global Research report.

Several of the market’s most influential companies are scheduled to report this week, including Amazon, Apple, Facebook and Google’s parent company. Those four account for 16% of the S&P 500’s total value, which gives their movements outsized influence on the index. 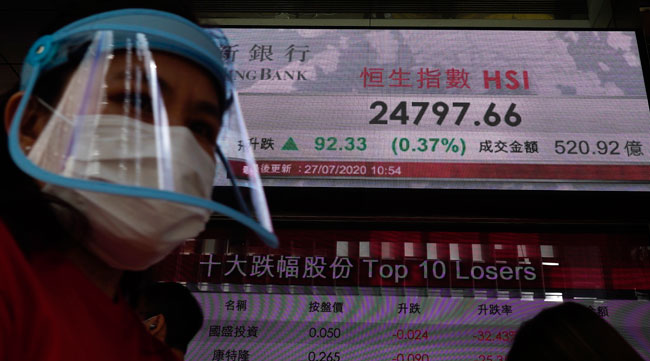 A man wearing a face mask and shield walks past a bank's electronic board showing the Hong Kong share index at the Hong Kong Stock Exchange on July 27. (Vincent Yu/Associated Press)

Such tech-oriented giants have cruised through much of the pandemic on expectations that they can continue to grow regardless of whether the economy is quarantined. But critics say their stocks have bubbled too high, even after accounting for the huge profits they produce.

The tech titans stumbled last week on such concerns, which helped pull the S&P 500 to its first weekly loss in four weeks.

Worries about an uptick in layoffs across the country also hurt stocks last week, as businesses close down again amid rising coronavirus counts across much of the Sun Belt. An extra $600 in weekly unemployment benefits from the U.S. government is set to expire soon, and Congress is still arguing about how to offer more aid for the economy.

The Trump administration’s chief negotiators spent the weekend on Capitol Hill working on a relief bill, though Democrats and Republicans still have much to negotiate.

“Investors are optimistic about the impending stimulus coming out of Congress, and they are expecting that it could be even greater than the current $1 trillion amount that is being floated,” said Sam Stovall, chief investment strategist at CFRA. “In order for the Democrats to come onboard, it could end up being double that amount.”

All the uncertainty about the economy, the pandemic and how long interest rates will remain at nearly zero have helped drive the price of gold higher, making it the best performing investment of 2020. More recently, a weaker U.S. dollar and worries about rising tensions between the United States and China have given gold an extra boost.

Gold for delivery in August added another $33.50 to settle at $1,931.00 per ounce July 27, after earlier climbing as high as $1,941.90. That’s an intraday record for the most actively traded contract, and it follows up the July 24 record high for a settlement price.

It’s unusual for the price of gold, which tends to rise when worries about the economy are high, to do so well at the same time as stocks, which tend to wilt under such worries.

“It’s a tug of war between those investors, and they’re really not acting in a normal way,” said Mark Hackett, chief of investment research for Nationwide. “But it’s 2020; nothing’s normal.”

Stan Choe, Damian J. Troise and Alex Veiga were the primary contributors to this report.