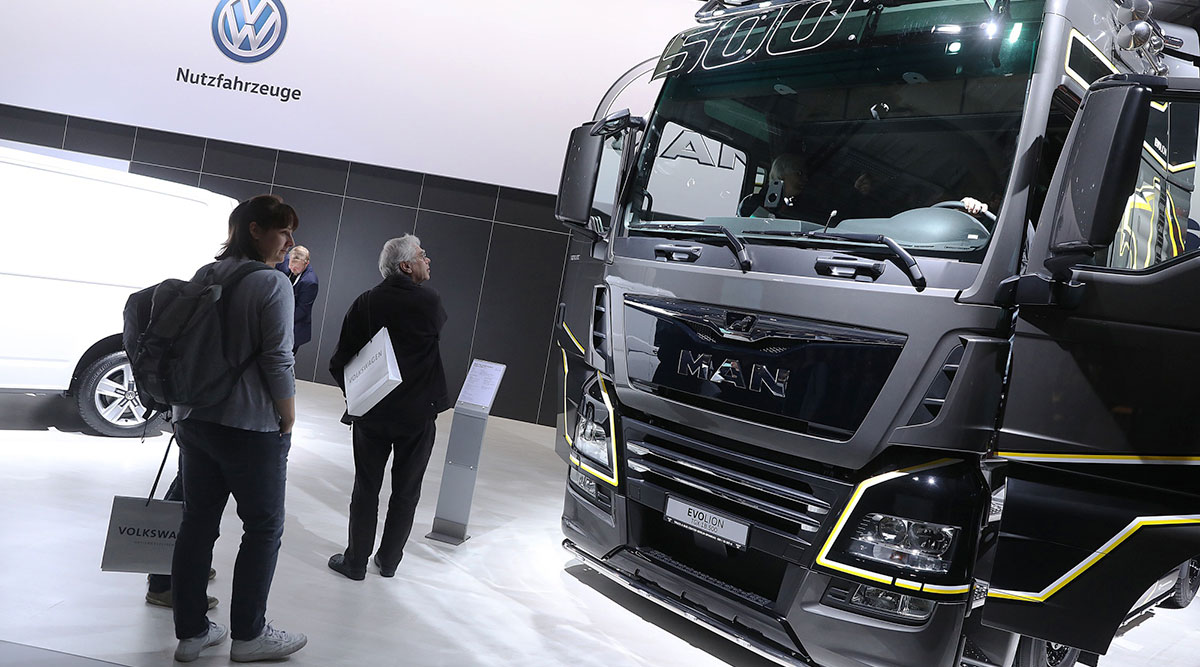 Volkswagen AG’s plan to list its truck division later this month will test whether it can pull off a feat that was once unthinkable for the German automotive giant: get smaller.

For decades, the world’s biggest carmaker only knew how to expand — adding Bentley luxury cruisers, Ducati racing bikes and Scania heavy trucks while taking its network of factories well past the 100 mark and its headcount more than 640,000.

Even in the face of the debilitating diesel-cheating scandal in 2015, the manufacturer didn’t trim its portfolio, bolstering investment in electric cars instead and even creating a new division for mobility services.

Now with the pace of change in the auto industry quickening, Volkswagen is trying its hand at trimming the empire.

If the listing of a minority stake in Traton SE — a truck and bus maker with three vehicle brands and valued at as much as 16.5 billion euros — goes well, it would give CEO Herbert Diess more sway to balance the often diverging interests of VW shareholders including the Porsche and Piech owner family, Lower Saxony and powerful labor unions.

Volkswagen’s share offering for Traton, its big-truck unit, could be the first of a number of divestitures https://t.co/UDTMhpuPOq via @WSJ #ipo — Robert J. Tannous (@BobTannous) June 14, 2019

“Traton’s IPO pricing suggests a healthy valuation, which puts a spotlight on VW’s significant sum-of-its-parts disconnect,” RBC Capital Markets analyst Tom Narayan said in a note. Concerns over the company’s ability to switch to electric vehicles is “unfairly” weighing on its share price, the analyst said.

For now, Diess seeks deeper technology partnerships and the possible sale of assets such as transmission maker Renk AG and MAN Energy Solutions, which develops engines. A successful Traton listing, targeted for June 28, even could spark rival Daimler AG to follow suit with a carve-out of its own truck business.

The truck group comprises three main assets: Scania, MAN and Volkswagen-branded budget trucks sold in South America and Africa, as well as a unit offering digital services to fleet operators. With 29 production and assembly sites globally, the business last year sold 223,000 vehicles. While that’s 14% more than a year earlier, it’s less than half of Daimler’s truck division, the world’s biggest.

Volkswagen is offering 50 million Traton shares at 27 euros to 33 euros apiece, plus a possible over-allotment of 7.5 million shares, meaning at the top end of the price range, the sale would raise as much as 1.9 billion euros.

Traton is looking to woo investors by combining the best-in-class technology and strong margins of the Scania unit with the prospect of a turnaround at MAN and growth potential in key markets, according to company presentations and research from advising banks seen by Bloomberg.

Scania is the group’s crown jewel, and Traton will aim to show it can maintain the heavy-truck specialist’s profitability. The Swedish brand is expanding its use of alternative-fuel technology such as hydrogen ahead of stricter emissions rules and introducing digital services to generate more revenue from fleet operators.

MAN has long been a problem, but some investors like a turnaround story, and so Traton will push its effort to revive the German division’s weak returns. This will be underpinned by replacing a 12-year-old truck with a new model next year. MAN also has room to expand in the lucrative aftermarket business. 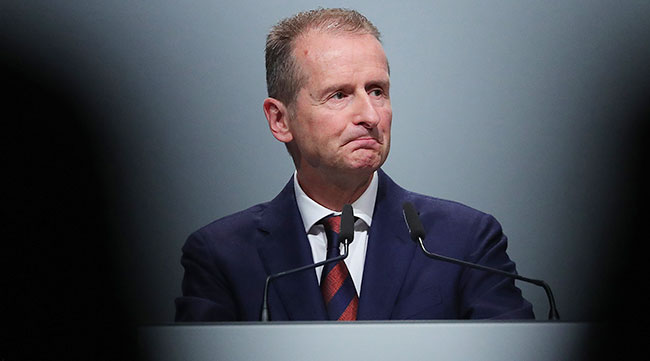 Traton is a major player in Brazil — a hugely profitable truck market before the economy tanked — and a recovery there will play well for the manufacturer’s VW-branded budget trucks, which could expand in the Middle East, Africa and Mexico.

Traton still is still more a collection of parts than a whole, and the company will talk about synergy prospects with a target to cut costs by 700 million euros by combining purchasing and engineering. Scania is leading development of the so-called CBE, a 13-liter engine that’s due to power more than half of Traton’s heavy trucks in 2025.

CEO Andreas Renschler, 61, is the mastermind behind Traton. After helping to establish Daimler’s commercial vehicles business as the world’s largest, he was lured to Volkswagen in 2014. Despite the partly overlapping operations, he has improved earnings over the past four years, mainly by enforcing closer cooperation between long-standing rivals Scania and MAN. Investor interest in Traton largely will be a bet on Renschler’s veteran skills to deliver in the cyclical truck market.

The timing of the listing, which was delayed earlier this year, is complicated by global volatility. The window may be as good as it gets. Rival Volvo Group — the main pure-play competitor — has gained 26% this year. 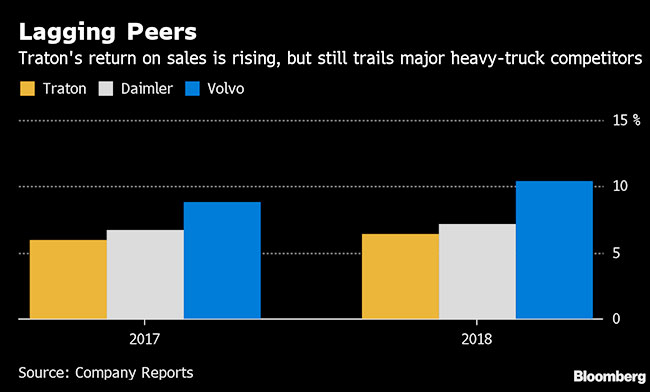 VW remains open to sell more Traton stock at a later stage, up to a maximum stake of 24.9%, if market conditions are supportive, he said.

Traton has only small bridgeheads in the key North American and Chinese markets, and the prospects for expanding those positions face obstacles.

While Daimler and Volvo have functioning production joint ventures in China, the world’s biggest truck market, Traton’s cooperation with Sinotruk Hong Kong Ltd., where its holds a 25% stake through MAN, has yet to deliver the hoped-for results.

Alliances can fall short of aspirations to create economies of scale, with the recent tensions at the Renault-Nissan Alliance a fresh reminder of the difficulties in uniting separate cultures. Traton also has a cooperation with Hino Motors Ltd., a Toyota Group company, on electric technology, product development and purchasing.

MAN has long attempted a turnaround, but improvements have been tepid compared with an aggressive restructuring at Volvo that doubled margins in about three years. MAN’s production footprint in high-cost Germany and a lineup that includes less-profitable medium-duty trucks limits the potential for improvement.