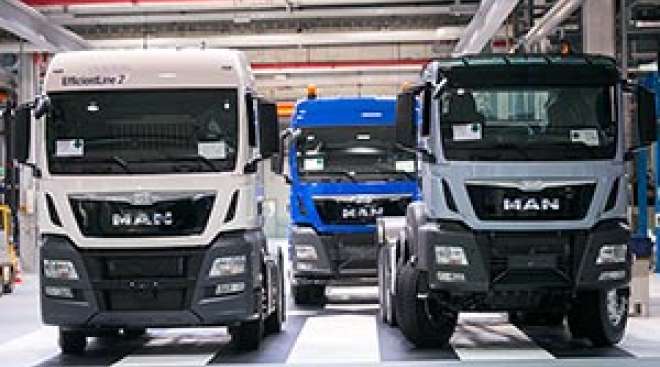 Volkswagen AG’s heavy-truck unit will continue to expand its global presence after striking a deal to buy a stake in U.S. peer Navistar International Corp., as the European manufacturer readies for technological change including rollouts of all-electric vehicles.

A robust presence in each of the world’s main regions is key to balancing cyclical swings in demand, Andreas Renschler, head of the Volkswagen Truck & Bus division, said in the text of a speech scheduled to be delivered Sept 20.

“The major transport and truck markets are seldom in sync,” he said in remarks prepared for a reception in Hanover, Germany, in advance of an industry show. “So what we need to do is to balance the impact of regional ups and downs.”

VW accelerated efforts last year to forge the world’s most profitable heavy-truck producer when it decoupled the commercial-vehicle operations from the larger passenger-car business just before that unit’s emissions-cheating scandal emerged. VW Truck & Bus was also created to deepen cooperation between the Scania and MAN brands to reduce duplicated work. Europe’s largest automaker has so far reaped few financial benefits from the billions of euros it spent on acquiring the two manufacturers over the past decade.

At the Hanover truck show, the world’s biggest, Scania will display a new heavy-duty range and MAN will present its new TGE model, which is based on the VW brand’s Crafter van and expands the marque’s line-up to include light models weighing three tons. Renschler plans to update investors and analysts about the truck division’s business prospects at a meeting on Sept. 22, when the weeklong show starts officially.

VW agreed earlier this month to pay $256 million for 16.6% of struggling Navistar and it will assume two board seats. The “close cooperation opens up a new level of scale for synergies, and we will see positive effects on the technology and supply side from that,” Renschler said. The stake, which VW may eventually increase, will put the Wolfsburg, Germany-based carmaker on a par with Navistar’s largest shareholders, activist investors Carl Icahn and Mark Rachesky.

Gaining traction in the U.S. heavy-truck market, which is dominated by Daimler AG, Volvo AB and Paccar Inc., is key to Renschler’s plan to make the VW division more global. The tie-up isn’t without risk, as Navistar’s market share has been shrinking in the U.S., where VW’s main auto brand was struggling even before the emissions-rigging scandal came to light. Munich-based MAN and Swedish counterpart Scania focus their sales in Europe, South America and Asia and don’t sell vehicles in the U.S.

The truck and bus unit’s savings push is part of companywide cutbacks to prepare for penalties from the diesel scandal and investments in low- and zero-emissions vehicles and digital services. Renschler said electric powering technology is most likely to come out initially in public transport vehicles.

"It is my deep conviction that we will have 100% e-drive in city buses first,” he said. “There is no dispute that vans and even heavy-duty distribution trucks will follow.”