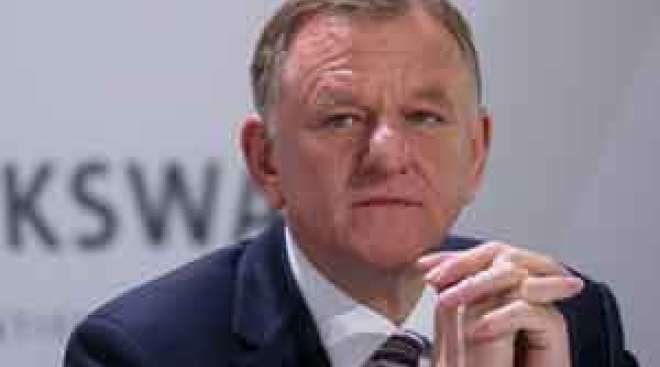 Renschler by Krisztian Bocsi/Bloomberg News
Volkswagen AG boosted its target for cost cuts at its trucks division to $1.12 billion (1 billion euros) as cooperation between its Scania and MAN units makes progress after years of tepid results.

Scania and MAN, which had previously sought 850 million euros in long-term savings, have started to develop gearboxes together, are combining manufacturing facilities in Russia and have begun working jointly on logistics, IT systems and smaller truck components.

“We have identified a very realistic long-term synergy potential,” VW trucks chief Andreas Renschler said May 25 in Stockholm, Sweden. The manufacturer is reaping about 200 million euros in savings already, mainly in purchasing, and “making progress at high speed” toward additional cooperation projects between the German and Swedish units, Renschler said. Meanwhile, Volkswagen is keeping all its options open for expanding the trucks business in the United States, he said.

Improved profitability would shore up Volkswagen’s truck operations as the group reels from the emissions-cheating scandal. The German automaker had made little headway on integration despite spending billions of euros to acquire full control of both MAN and Scania. Renschler, who previously ran Daimler AG’s commercial vehicle operations before joining Volkswagen last year, was recruited to turn things around. He’s also exploring growth possibilities that could include acquisitions and ultimately an initial public offering.

Renschler’s 1 billion euro savings plan revives a target originally stated by former Volkswagen Chairman Ferdinand Piech at a MAN shareholder meeting in 2008. VW truck executives have since steered clear of that goal. When the company acquired full control of Scania in 2014, it estimated annual synergies of at least 850 million euros in 10 to 15 years’ time.

VW folded Scania, MAN and its operation that manufactures heavy trucks under the VW marque in Latin America into the Truck & Bus GmbH holding company a year ago, decoupling it from passenger car operations. Truck models vary significantly from region to region, and cyclical market swings in demand can be large, which makes it more difficult to create economies of scale than in the passenger-vehicle sector.

All VW top truck engineers in research and development will gather next week for the first time to plan projects as part of Renschler’s goal of transforming the business into the world’s most profitable commercial-vehicle manufacturer. Battery technology and digital features are two areas with potential, Scania CEO Henrik Henriksson said May 26 at the company’s headquarters in Soedertaelje, Sweden.

“There is big potential in electrification of commercial vehicles as well, even if at the moment it’s still a challenge in economic terms,” Henriksson said.

Like its competitors, Volkswagen is attempting to boost data services that are set to become critical for trucking companies in coming years. The effort includes exploring cooperation with HERE, the digital maps company bought last year by sister unit Audi, as well as BMW AG and Daimler’s Mercedes. Trucks are particularly well-suited to collecting traffic data because they’re constantly on the road, Renschler said.

Unlike most of its passenger car siblings, VW’s trucks operation isn’t dealing directly with fallout from the diesel-emissions scandal. Still, the crisis triggered a management revamp at the parent company and accelerated a push begun a year ago to give the automaker’s 12 brands more autonomy.