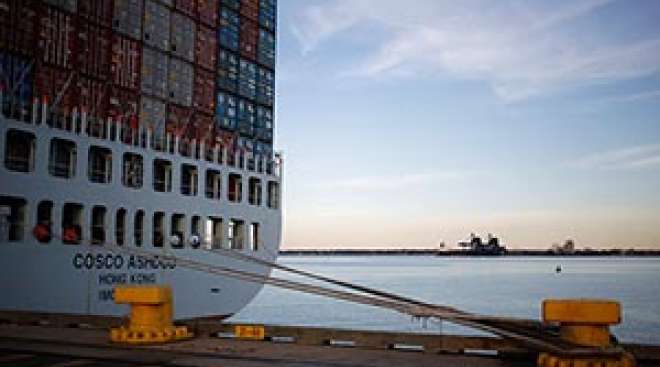 From July through January, the first seven months of the 2016 fiscal year, container volume as measured in standard 20-foot units, or TEUs, grew 2.8% from the same period a year ago.

“Though modest, our volumes in January were the best on record for that month,” John Reinhart, executive director and CEO of the authority, said in a statement. “We continue to track according to our forecast, and it is our expectation that volumes for the balance of the winter and into the spring will be relatively flat.”

Truck-container volume for the month was up 1.2% year-over-year, while rail volume dipped 2.5%.

From July through January, truck-container volume was flat, up 0.5% from the same period a year earlier; rail volume rose 6.5%.

Richmond Marine Terminal had its best January on record, moving 1,295 containers, a 45% gain year-over-year; the Richmond facility’s container volume is up nearly 13% so far this fiscal year, the authority reported.

Total barge-container volume for the month fell 30.8% from last year and 25.8% for the first seven months of the fiscal year.

The port’s 0.4% year-over-year bump in container volume last month followed drops in November and December of 2.5% and 3%, respectively.

Savannah, Ga., reported a 2.8% drop in TEU volume in January, following a 6.3% year-over-year decline in December and a 4.7% gain in November.