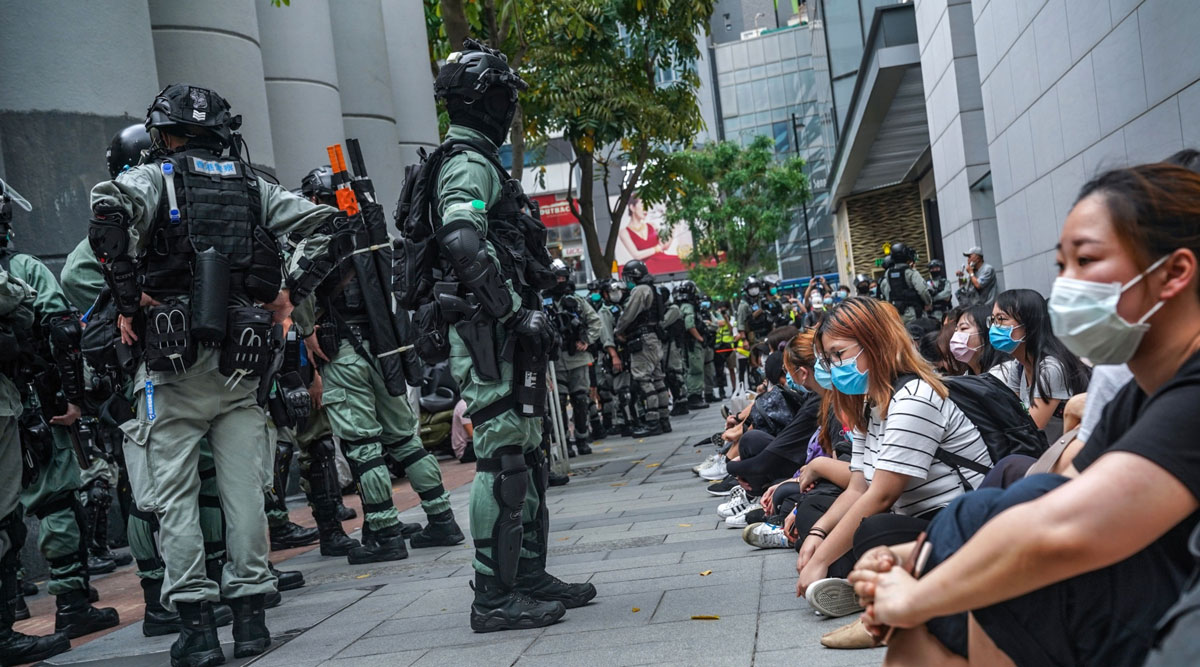 Demonstrators are detained by riot police in front of a shopping mall in Hong Kong on May 27. (Lam Yik/Bloomberg News)

The U.S. has certified that Hong Kong is no longer politically autonomous from China, a move that could have far-reaching consequences on the former British colony’s special trading status with the U.S., Secretary of State Michael Pompeo said.

“Hong Kong does not continue to warrant treatment under United States laws in the same manner as U.S. laws were applied to Hong Kong before July 1997,” Pompeo said in a statement. “No reasonable person can assert today that Hong Kong maintains a high degree of autonomy from China, given facts on the ground.”

The May 27 move was compelled by last year’s Hong Kong Human Rights and Democracy Act. The law signed by President Donald Trump requires such a certification each year. It comes as China has announced its intention to pass a national security law curtailing the rights and freedoms of Hong Kong citizens.

Pompeo’s decision opens the door for a range of options, from visa restrictions and asset freezes for top officials to possibly imposing tariffs on goods coming from the former colony.

“The United States stands with the people of Hong Kong as they struggle against the CCP’s increasing denial of the autonomy that they were promised,” Pompeo said, referring to the Chinese Communist Party.

China has warned that it would retaliate if the U.S. put sanctions on Hong Kong or interfered in its affairs.

China took back control of Hong Kong from the U.K. under an agreement known as “One Country, Two Systems,” in which it promised to give the former colony broad political and economic independence for 50 years. But under President Xi Jinping, China has steadily asserted more control over Hong Kong, touching off a wave of protests that stalled only as the coronavirus pandemic swept the globe.

The U.S. action hits Hong Kong after a year of often-violent protests.

Earlier May 27, protesters planned to gather at the city’s Legislative Council, which was debating a separate law that would criminalize insulting China’s national anthem. Yet they ended up getting nowhere close, and the hearing proceeded as normal — a far cry from about a year ago, when a mass of people managed to thwart a bill that would allow extraditions to China.

Trump, asked about the possible sanctions at the White House on May 26, said his administration is “doing something now” that he would unveil later in the week.

“It’s something you’re going to be hearing about over the next — before the end of the week,” Trump said. “Very powerfully, I think.”

Under the U.S.-Hong Kong Policy Act of 1992, Washington agreed to treat Hong Kong as fully autonomous for trade and economic matters even after China took control. That meant Hong Kong was exempt from Trump’s punitive tariffs on China, can import certain sensitive technologies, and enjoys U.S. support for its participation in international bodies like the World Trade Organization.

But the law enacted last year gives the administration broad authority to impose sanctions or other punishments. The administration can also revoke Hong Kong’s special trading status if it chooses.