On that day, USPS said it delivered 28 million packages and 463 million pieces of mail.

“The volume this holiday season demonstrates that retailers and consumers increasingly are turning to the Postal Service to deliver their packages,” Postmaster General Patrick Donahoe said in a statement.

To prepare for the holiday volume, the postal service said it enhanced its network and delivered packages seven days a week starting in November.

More than 20 million packages were delivered during the five Sundays before Christmas, according to USPS.

“We know how much our customers count on us to make sure cards, letters and gifts make it home, and I’m proud that we delivered on our promise,” Donahoe said. 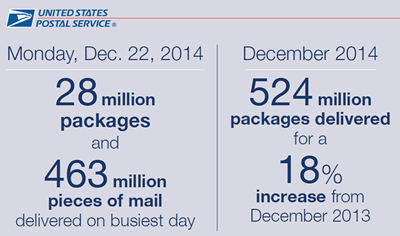 “The dedication and resolve of our employees is commendable,” Donahoe said. “They adapted and delivered heavier-than-ever volumes of packages. They worked extremely hard, many of them braving harsh weather. I’m honored by the commitment they demonstrated this holiday season.”