US Job Losses to Mount With Small Firms Running on Fumes 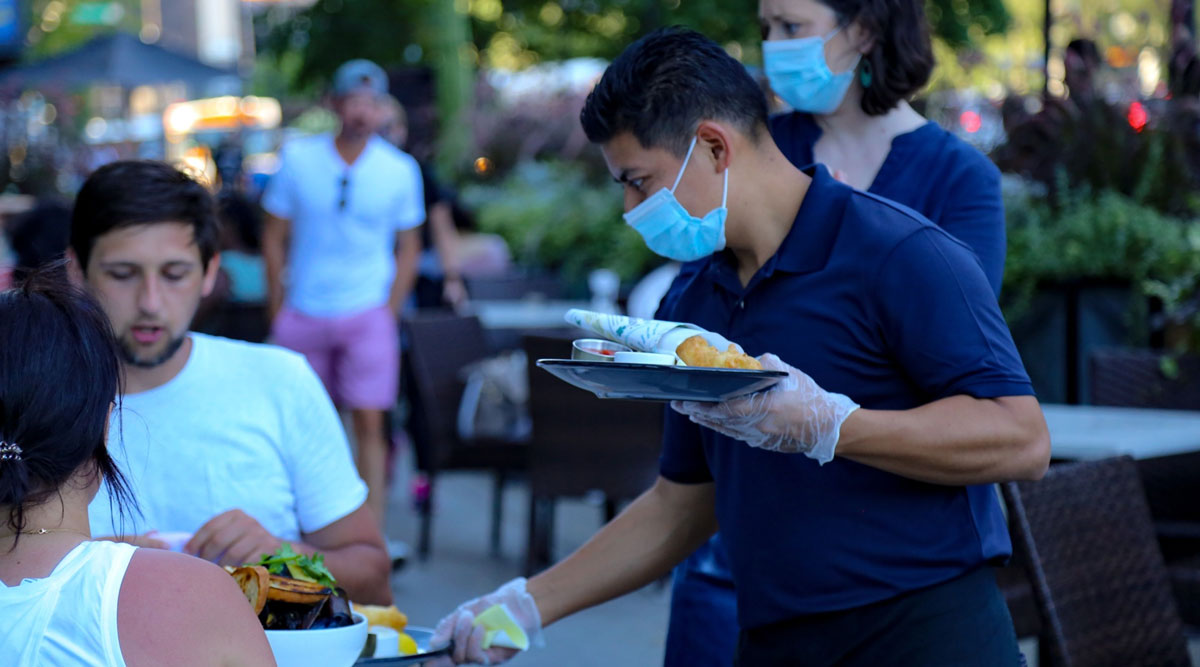 A waiter wearing protective equipment serves food to patrons at the outdoor seating area of a restaurant in Chicago on July 24. (Olivia Obineme/Bloomberg News)

The clock is ticking for Bonnie Morales and the acclaimed restaurant she opened a few years ago in Portland, Ore. She’s among thousands of U.S. small-business owners who are considering layoffs in coming months as they plow through government aid.

One-fifth of small companies are planning to dismiss workers or already have done so after using up their federal Paycheck Protection Program loans, and nearly half of firms said they will need additional aid over the next year, according to a National Federation of Independent Business survey. Another poll led by Cornell University showed about one in four workers hired back thanks to PPP were told by their employer they may be laid off again.

“Come October, if everything stays the same, there’s really no chance we’ll be able to operate,” said Morales, co-owner of Kachka, a Russian restaurant that has won national recognition. The loan “is like a Band-Aid on top of a Band-Aid — it’s barely holding on. It’s going to fall right off in October.”

The funds allowed her to hire back most of the 48 people on staff and reopen with outdoor seating in a nearby parking lot. Once her $500,000 loan runs out, she’ll have to lay off as many as half of her current employees. The White House and lawmakers so far have been unable to agree on terms for a successor stimulus program that also includes supplemental benefits for the unemployed.

Small businesses with fewer than 500 workers employ about 58 million people, almost half the private workforce, ADP Research Institute data show. PPP at some point supported businesses representing most of them, according to the Small Business Administration, which runs the program.

But “hundreds of thousands” more jobs remain on the edge in the next few months without a deal from Congress, Moody’s Analytics Chief Economist Mark Zandi said.

Morales’ predicament is just one of several reasons why the July employment report Aug. 7, projected to show a 1.5 million gain in payrolls, could be followed by losses in coming months. Half of U.S. states have put reopening on hold, slowing foot traffic anew.

“What we’re getting now is evidence that the recovery is leveling off,” Mohamed El-Erian, chief economic adviser at Allianz SE and a Bloomberg columnist, said on Bloomberg Television last week. “If we don’t get fiscal action, then we will go backwards.”

Under the current program, Morales and others aren’t able to request more funds. The next stimulus plan may allow them to do so — if and when it gets approved.

The management consultant said the funds helped ensure her 15 workers remained paid — even as some of her clients, ranging from colleges to natural resource companies, scaled back or canceled projects. Many of these firms ran out of PPP funds themselves, or never applied because they feared being on the hook for repayment, or didn’t have the banking relationships to secure funding.

The problem is that the coronavirus continues to play havoc with the economy and revenue streams as states dial back reopenings.

“If our business isn’t back to a consistent level that it was at before, or we can’t reduce any more of our expenses, then you’re left with people,” Slaughter said. “If there isn’t another round of stimulus, we’ll start cutting past the fat and to the bone. And that’s our people. And our people are hard to replace.”

Some of the job jitters already are showing up in high-frequency or other weekly data, such as two straight weeks of rising filings for state unemployment benefits.

Figures from Homebase, a scheduling tool used by about 100,000 businesses, show the share of people working at the end of July actually declined from the start of the month, the first time that’s happened since March.

Back in Portland, Morales is getting creative to keep her business open, selling dumplings online and considering making another Russian item that’s likely in high demand these days.