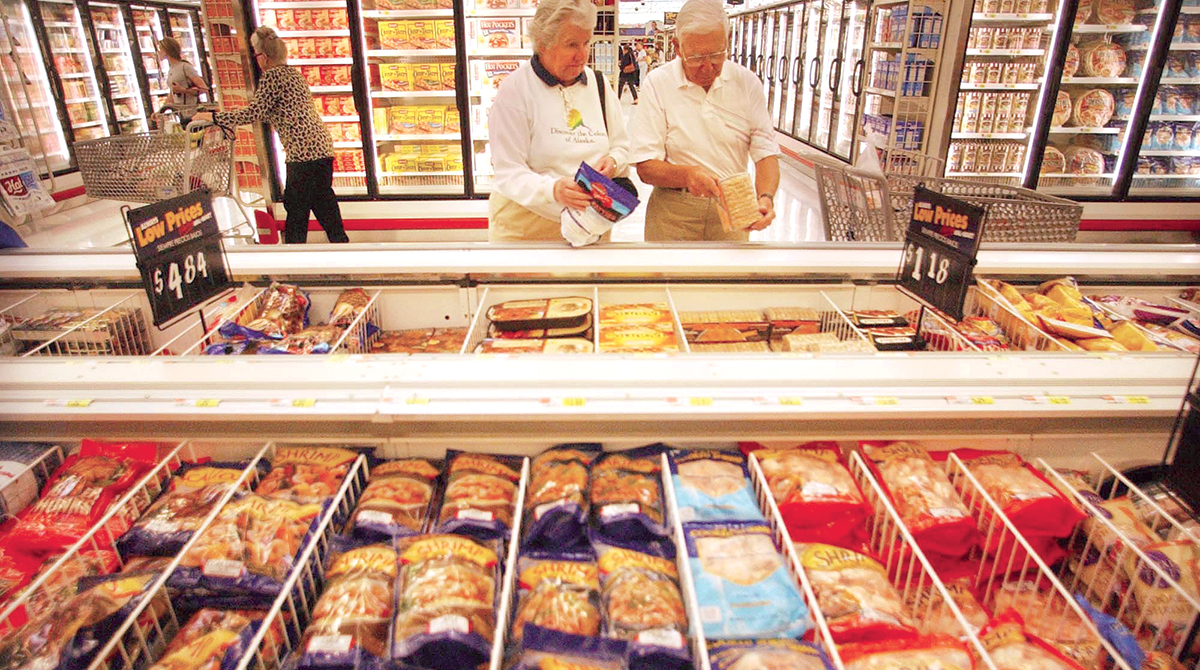 Shoppers look at frozen foods at a Walmart in California. (Sandy Huffaker/Bloomberg News)

WASHINGTON — Propelled by surging costs for gas, food and housing, consumer inflation jumped 7.9% over the past year, the sharpest spike since 1982 and likely only a harbinger of higher prices to come.

The increase reported March 10 by the Labor Department reflected the 12 months ending in February and didn’t include most of the oil and gas price increases that followed Russia’s invasion of Ukraine on Feb. 24. Since then, average gas prices nationally have jumped about 62 cents a gallon to $4.32, according to AAA.

The government’s report March 10 also showed that inflation rose 0.8% from January to February, up from the 0.6% increase from December to January.

For most Americans, inflation is running far ahead of the pay raises that many have received in the past year, making it harder for them to afford necessities such as food, gas and rent. As a consequence, inflation has become the top political threat to President Joe Biden and congressional Democrats as the midterm elections draw closer. Small-business people say in surveys that it is their primary economic concern, too.

Seeking to stem the inflation surge, the Federal Reserve is set to raise interest rates several times this year beginning with a modest hike next week. The Fed faces a delicate challenge, though: If it tightens credit too aggressively this year, it risks undercutting the economy and possibly triggering a recession.

Energy prices, which soared after Russia’s invasion of Ukraine, jumped again this week after Biden said the United States would bar oil imports from Russia. Oil prices did retreat March 9 on reports that the United Arab Emirates will urge fellow OPEC members to boost production. U.S. oil was down 12% to $108.70 a barrel, though still up sharply from about $90 before Russia’s invasion.

Yet energy markets have been so volatile that it is impossible to know if the decline will stick. If Europe were to join the U.S. and the United Kingdom and bar Russian oil imports, analysts estimate that prices could soar as high as $160 a barrel.

The economic consequences of Russia’s war against Ukraine have upended a broad assumption among many economists and at the Fed: that inflation would begin to ease this spring because prices rose so much in March and April of 2021 that comparisons to a year ago would show declines.

Should gas prices remain near their current levels, Eric Winograd, senior economist at asset manager AllianceBernstein, estimates that inflation could reach as high as 9% in March or April.

The cost of wheat, corn, cooking oils and such metals as aluminum and nickel have also soared since the invasion. Ukraine and Russia are leading exporters of those commodities.

Even before Russia’s invasion, inflation was not only rising sharply but also broadening into additional sectors of the economy. Many prices have jumped over the past year because heavy demand has run into short supplies of items such as autos, building materials and household goods.

But even for some services unaffected by the pandemic, such as rents, costs are also surging at their fastest pace in decades. Steady job growth and high home prices are encouraging more people to move into apartments, elevating rental costs by the most in two decades. Apartment vacancy rates have reached their lowest level since 1984.

In the final three months of last year, wages and salaries jumped 4.5%, the sharpest such increase in at least 20 years. Those pay raises have, in turn, led many companies to raise prices to offset their higher labor costs.

Soaring energy costs pose a particularly difficult challenge for the Fed. Higher gas prices tend to both accelerate inflation and weaken economic growth. That is because as their paychecks are eroded at the gas pump, consumers typically spend less in other ways.

That pattern is akin to the “stagflation” dynamic that made the economy of the 1970s miserable for many Americans. Most economists, though, say they think the U.S. economy is growing strongly enough that another recession is unlikely, even with higher inflation.

US Inflation Unexpectedly Accelerates to 40-Year High of 8.6%