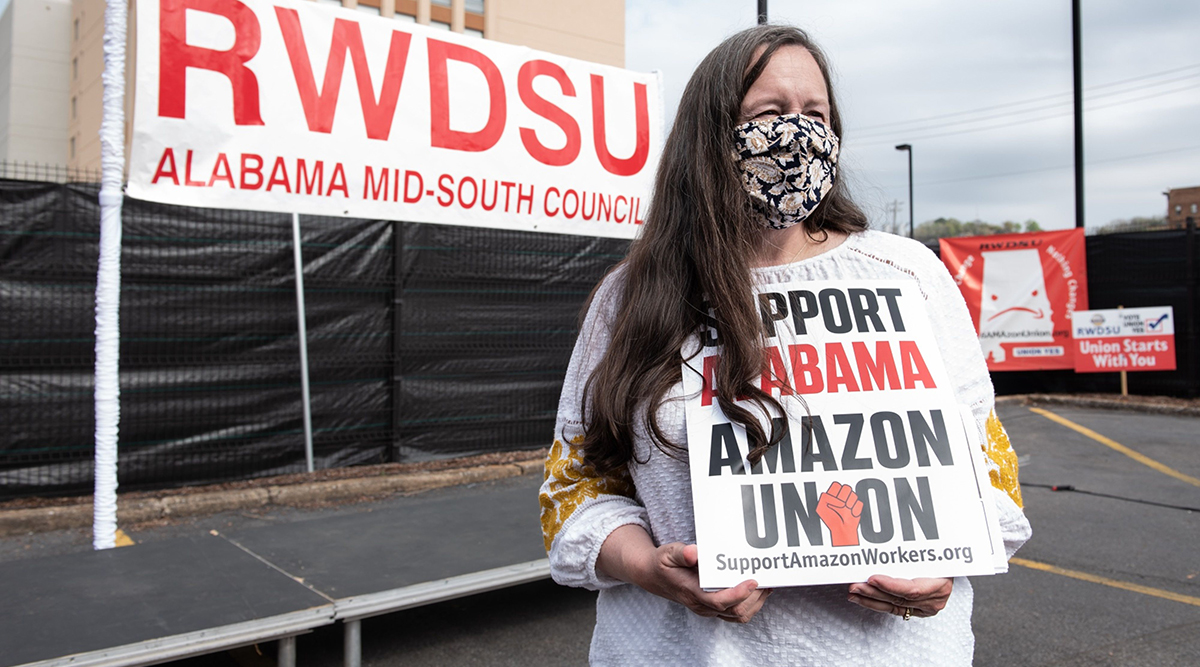 A Retail, Wholesale and Department Store Union supporter holds a sign outside of the union headquarters in Birmingham, Ala. on March 26. (Andi Rice/Bloomberg News)

Accusing Amazon.com Inc. of misconduct, the retail union that lost a hotly contested election at the company’s Alabama warehouse has asked federal officials to set aside the results.

In a complaint filed late April 16 with the National Labor Relations Board, the Retail, Wholesale and Department Store Union alleged that Amazon “prevented a free and uncoerced exercise of choice by the employees,” including threatening employees and retaliating against union supporters. The RWDSU provided a copy of the filing, which was not yet visible on the agency’s docket.

According to the union, Amazon interrogated employees about their views of the RWDSU and issued a series of threats, including that it would shutter the warehouse if they unionized. The union accuses the company of discouraging union supporters from discussing the proposal to join the RWDSU during work hours, while allowing anti-union employees to agitate against the union while on the clock.

Workers who questioned the company’s claims during mandatory anti-union meetings were called up and then kicked out in front of hundreds of co-workers, the union said, while pro-union employees were reassigned to roles where they would be isolated from colleagues while at work. The union also accused Amazon of firing a union supporter for distributing union cards and punishing an employee for challenging the company’s claims during the mandatory sessions. In the filing, the union didn’t identify specific people fired or punished but pledged to submit evidence to the labor board.

The RWDSU accused the company of pressuring local officials into changing the time of a nearby traffic light so organizers would have less time to talk to employees on their way home. The union also said Amazon defied the labor board’s mail-in ballot directive by pressuring workers to cast their votes in a mailbox the company got installed in a tent on its property, in view of surveillance cameras.

“Rather than accepting these employees’ choice, the union seems determined to continue misrepresenting the facts in order to drive its own agenda,” an Amazon spokesperson said in an email. “We look forward to the next steps in the legal process.”

The RWDSU received 738 yes votes in the seven-week mail-in ballot election, while Amazon garnered 1,798 no votes on whether to unionize. Contested ballots, most of them disputed by Amazon, according to the union, totaled 505 and weren’t opened.

The labor board has the authority to invalidate election results in response to conduct that could have changed the outcome and prevented employees from making a free choice about whether to unionize. Challenges to election results are considered by regional labor board officials, whose rulings can then be appealed to board members in Washington. The NLRB has five seats, with staggered terms; Republicans are slated to hold a majority of them until August.

A successful appeal by the union would likely lead to a new election. Failing that, the RWDSU would have to wait at least 12 months and also sign up enough employees to again demonstrate substantial support for the proposed bargaining unit.

Employees, lawmakers and the broader public will be watching the appeal closely because the outcome could affect how workers organize elsewhere and inform congressional debate over the labor movement’s push to overhaul federal labor laws.

— With assistance from Matt Day.