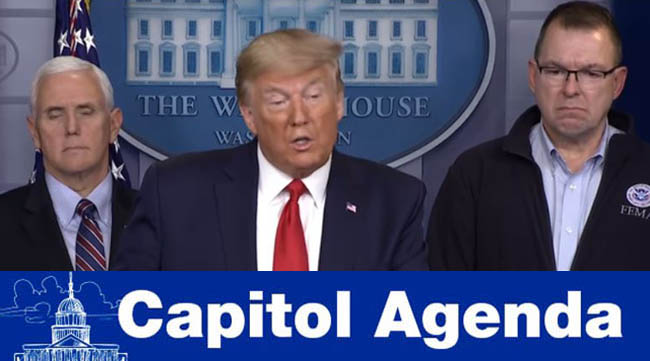 While Republicans and Democrats disagree on certain priorities in a $1.8 trillion economic stimulus package, President Donald Trump recently expressed optimism about its chances of advancing through the chambers this week.

The plan would propose, among other things, loan guarantees of up to $8 billion for cargo air carriers. The stimulus is meant to restore economic normalcy after the coronavirus crisis altered Americans’ way of life.

He added, “I think our stimulus package will get done, and it will be a tremendous package. We’re really not — I mean, they may not have gotten those votes but they’re very close to getting a deal done.”

As the country looks to Congress for an answer to the crisis, senators plan to take up procedural votes March 23 on the rescue package, which Democrats have argued would be insufficient for working families and the soon-to-be-unemployed. Over the weekend, the Republican leadership did not garner sufficient votes to proceed on the package due to partisan objections. Majority Leader Mitch McConnell (R-Ky.) shared his frustration after coming up short on votes.

Democrats are pushing for greater attention to individuals, small businesses and the health care sector nationwide. They’ve argued the measure’s aggressive focus on the corporate class misses the mark. As Speaker Nancy Pelosi (D-Calif.) put it after the vote, “As the Senate continues to talk, we must continue to act for the people.”

Dean Obeidallah shared a special thanks to those truckers out there: “While many of us are huddled up at home to avoid getting ill, these drivers are out on the highways driving past ‘amber waves of grain’ and our nation’s ‘purple mountain majesty’ as they travel from sea to shining sea carrying goods to ensure, bluntly, that we survive.”

The friends at Fox News attempt to control the narrative.

Peter Gaynor, director of the Federal Emergency Management Agency, on ABC’s “This Week” on March 22.