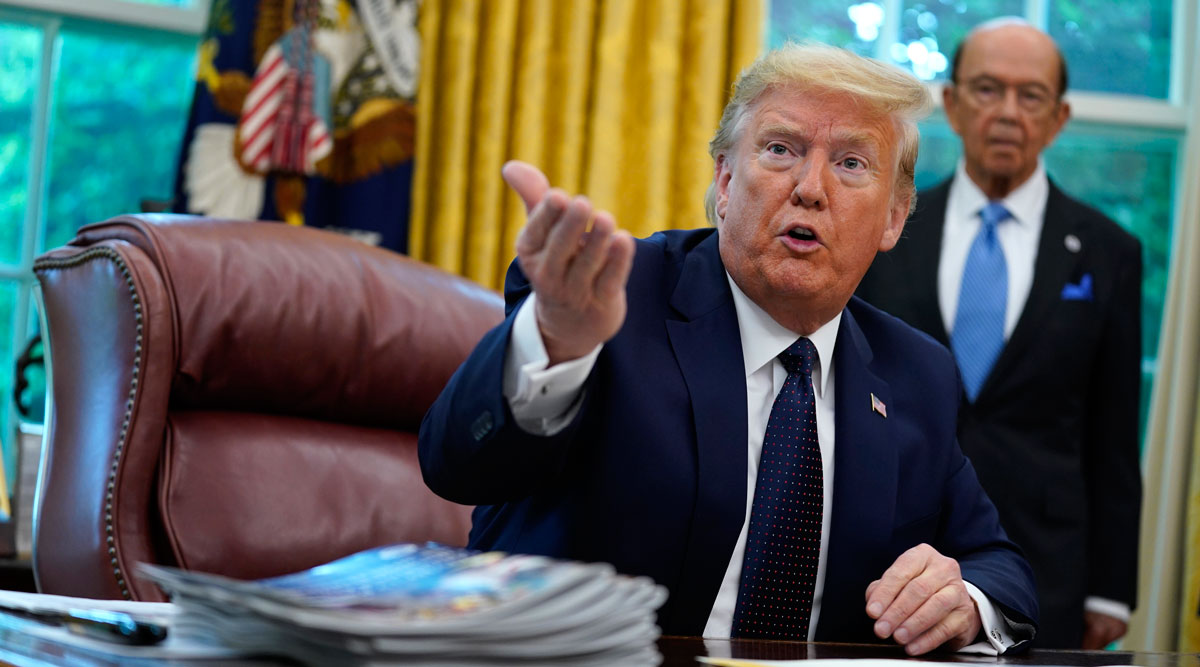 President Trump speaks in the Oval Office of the White House on May 28. (Evan Vucci/Associated Press)

President Donald Trump intensified his confrontation with China, vowing to punish the country for the coronavirus pandemic and taking steps to curb Hong Kong’s autonomy by ending the territory’s special trade status with the U.S. and denying visas to Chinese officials.

Citing a litany of grievances against the country, some dating to before he was elected president, Trump said the U.S. would begin a process to revoke Hong Kong’s preferential trade status under U.S. law. American financial regulators would examine Chinese firms listed on U.S. stock markets with an eye toward limiting American investment in the companies, he said, and Chinese nationals considered to be security threats would be denied entry to the country.

The U.S. will terminate its support for the World Health Organization, Trump said, claiming the agency had been manipulated by Beijing during the pandemic and was under the “total control” of China.

But few of Trump’s actions will take place immediately, and U.S. financial markets were untroubled by his announcement.

U.S. stocks erased losses and traded little changed as Trump stopped short of implementing more draconian measures against China, with the S&P 500 Index up 0.3% as of 3:10 p.m. ET on May 29.

Trump’s announcement came after China’s legislature moved this week to impose a new national security law on Hong Kong that critics say will restrict freedoms in the city. The president has also sought to blame China for the coronavirus pandemic that has killed more than 100,000 Americans as domestic criticism of his handling of the outbreak has mounted.

“China’s pattern of misconduct is well known,” Trump said, complaining about the history of the U.S. trading relationship with the country.

He said Beijing “unlawfully claimed territory in the Pacific Ocean” and “broke its word with the world on ensuring the autonomy of Hong Kong.”

“The Chinese government has continuously violated its promises to us,” he said. “These plain facts cannot be overlooked or swept aside. The world is now suffering as a result of the malfeasance of the Chinese government,” he added, a reference to the pandemic.

The retaliatory measures did not include withdrawal from the “phase one” trade deal Trump signed in January.

China’s legislature has approved a plan to draft legislation that Hong Kong democracy advocates say will curtail freedom of speech and undermine the city’s independent judiciary.

That prompted Secretary of State Michael Pompeo to announce earlier this week that the administration no longer considers the city sufficiently autonomous under a 1992 law that allows for easier travel and trade between the U.S. and Hong Kong. The law also allows companies based in the Chinese territory access to American technologies deemed sensitive to national security that face export restrictions in mainland China.

Chinese officials earlier May 29 called potential U.S. actions over Hong Kong “purely nonsense,” saying the matter was an internal affair and that essential freedoms in the city would remain intact.

Trump’s announcement follows weeks of growing anger toward Beijing within the White House. The president and his advisers have repeatedly blamed the Chinese government for the coronavirus outbreak that began in the country’s Hubei province but that has caused a far greater death toll in the U.S. than China has publicly reported.

“Frankly the U.S. government is — I’ll use the word ‘furious,’ at what China has done in recent days, weeks and months,” White House economic adviser Larry Kudlow told Fox News earlier on May 29. “They have not behaved well and they have lost the trust, I think, of the whole Western world.”

Trump has also expressed frustration that Chinese purchases of U.S. agricultural goods are lagging behind levels agreed to in the “phase one” trade agreement he signed with a delegation from Beijing in January.

“This binds the president to nothing with regards to China,” Scissors said. “With regards to a Hong Kong policy, it is a nonevent. Nothing happened.”

Saleha Mohsin, Jenny Leonard, Jennifer Jacobs and Justin Sink were the primary contributors to this report.