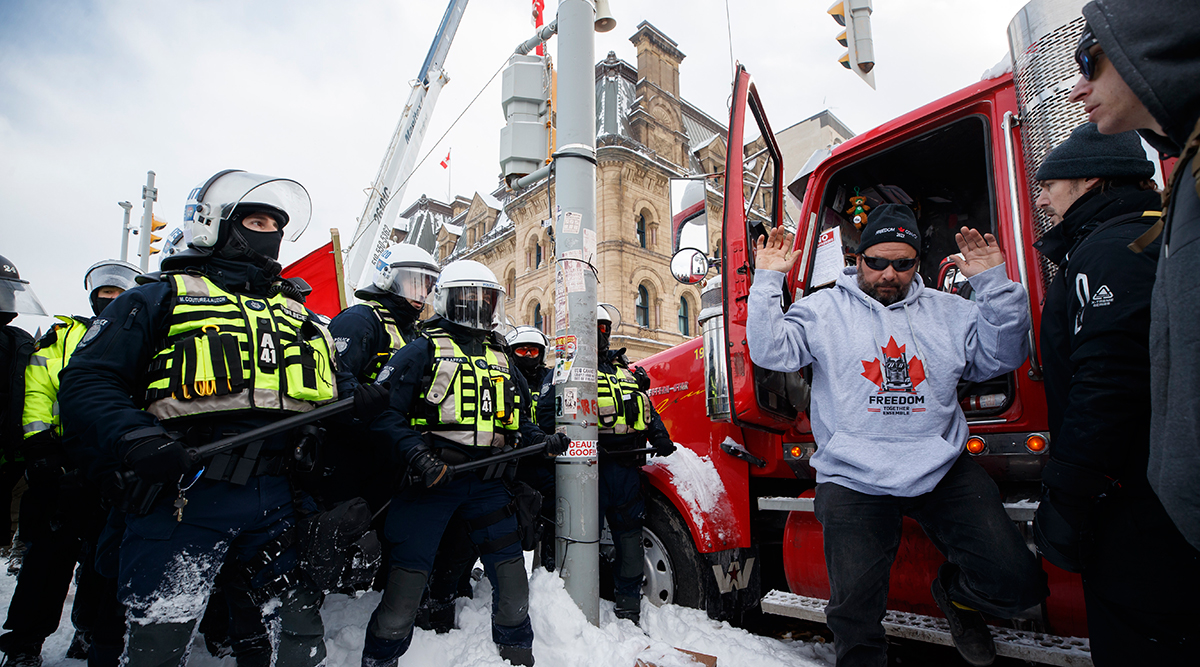 A man steps out of truck as police move in to clear downtown Ottawa Feb. 19. (Cole Burston/The Canadian Press via Associated Press)

OTTAWA, Ontario —Hundreds of police in riot gear swept through the streets of Canada’s besieged capital Feb. 19, arresting or driving out protesters, towing away their trucks and finally retaking control of the streets in front of the country’s Parliament buildings.

With protesters in clear retreat in the largest police operation in the country’s history, the end of the three-week Ottawa protest against the country’s COVID-19 restrictions and the government of Prime Minister Justin Trudeau appeared to be in sight. Far smaller protests continued in a handful of places scattered across Canada.

Interim Police Chief Steve Bell said that while some smaller protests continued "this unlawful occupation is over. We will continue with our mission until it is complete.”

While some protesters vowed to stay on Ottawa's streets, one prominent organizer told reporters they had “decided to peacefully withdraw.”

“We will simply regroup as a grassroots movement,” Tom Marazzo said at a press conference.

Police had been brought in from across the country to help in the clearance operation, Bell said, adding that 170 people were arrested Feb. 18 and 19 and multiple investigations had been launched because of weapons seizures.

“We’re not going anywhere until you have your streets back,” he said at a press conference, vowing to go after protesters who don't disperse with “financial sanctions and criminal charges."

By early afternoon on Feb. 19, protesters were gone from the street in front of Parliament Hill, the collection of government offices that includes the Parliament buildings, which had the heart of the protests. It had been occupied by protesters and their trucks since late last month, turning into a carnival on weekends. 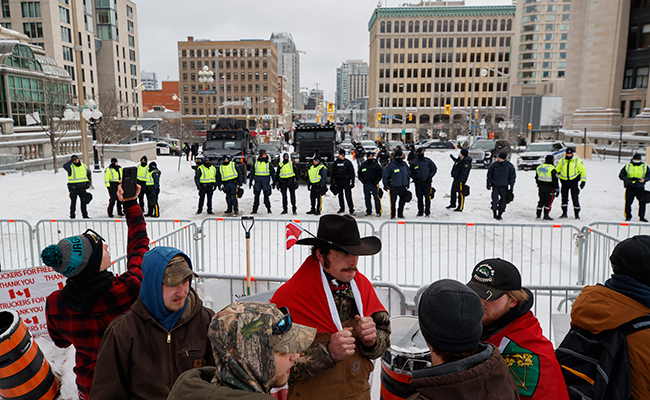 They also closed a bridge into the nation’s capital from Quebec to prevent a renewed influx of protesters.

Around midday, protest organizers said they had ordered truckers to move away from Parliament Hill, decrying the police’s actions as “abuses of power.”

“To move the trucks will require time,” organizers said in a statement. “We hope that (police) will show judicious restraint.”

Earlier, Ottawa police addressed the protesters in a tweet: “We told you to leave. We gave you time to leave. We were slow and methodical, yet you were assaultive and aggressive with officers and the horses. Based on your behavior, we are responding by including helmets and batons for our safety.”

PROTESTORS: We told you to leave. We gave you time to leave. We were slow and methodical, yet you were assaultive and aggressive with officers and the horses. Based on your behaviour, we are responding by including helmets and batons for our safety. pic.twitter.com/drxfhG9clP — Ottawa Police (@OttawaPolice) February 19, 2022

Police said one protester launched a gas canister and was arrested as they advanced.

Those arrested included four protest leaders. One received bail while the others remained jailed.

Tow truck operators wearing neon-green ski masks, with their companies’ decals taped over on their trucks to conceal their identities, arrived under police escort and started removing hundreds of big rigs, campers and other vehicles parked shoulder to shoulder near Parliament. Police smashed through the door of at least one camper before hauling it away. 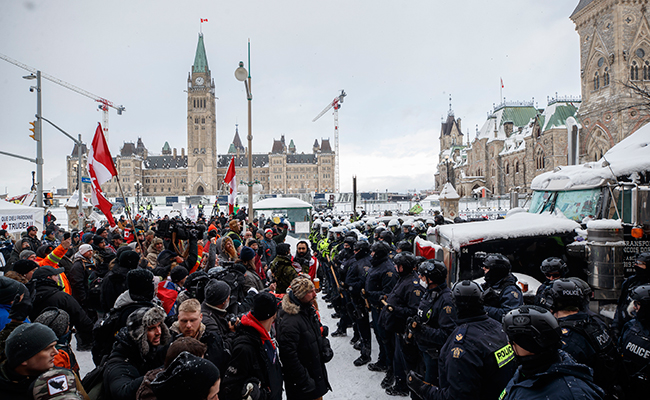 The crackdown on the self-styled Freedom Convoy began the morning of Feb. 18, when hundreds of police, some in riot gear and some carrying automatic weapons, descended into the protest zone and began leading demonstrators away in handcuffs through the snowy streets as holdout truckers blared their horns.

The capital and its paralyzed streets represented the movement’s last stronghold after weeks of demonstrations and blockades that shut down border crossings into the U.S. and created one of the most serious tests yet for Trudeau. They also shook Canada’s reputation for civility, with some blaming America’s influence.

The Freedom Convoy demonstrations initially focused on Canada’s vaccine requirement for truckers entering the country but soon morphed into a broad attack on COVID-19 precautions and Trudeau’s government.

Ottawa residents complained of being harassed and intimidated by the truckers and obtained a court injunction to stop their incessant honking.