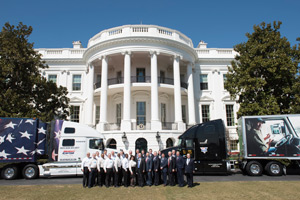 WASHINGTON — Trucking leaders met with President Trump on March 23 to lend their support to his efforts to repeal and replace the Affordable Care Act, and to open a dialogue that they hope will lead to further discussion of the nation’s infrastructure.

“We cannot grow this economy if this industry cannot afford health care,” American Trucking Associations President Chris Spear told reporters after he and a group of industry leaders met with Trump in a closed-door listening session.

For UPS Freight, the costs of health care have grown to become 2 1/2 times more expensive than the costs of fuel, Rich McArdle, the carrier’s president, told Transport Topics in advance of the event. And at James Burg Trucking, health-care costs increased $300,000 last year, company President James Burg said. Burg told TT that while his company had previously covered the costs of employee health care, rising costs have led to it introducing a plan under which employees must pay.

PHOTO GALLERY: Images from trucking's visit to the White House

“They’re just starting to understand,” he told TT, stating that some of his employees thought the ACA would broaden their options.

Burg and others attending the meeting are hoping the March 23 visit is the first of more to come with the president, who thanked the trucking industry for its support of his efforts to pass legislation that would replace the ACA.

“You have experienced a crippling rise in premiums,” Trump told the group during a brief meeting that was open to the press, and he lamented that the coverage mandates in the ACA have forced fleets to “do things you don’t want to do.” 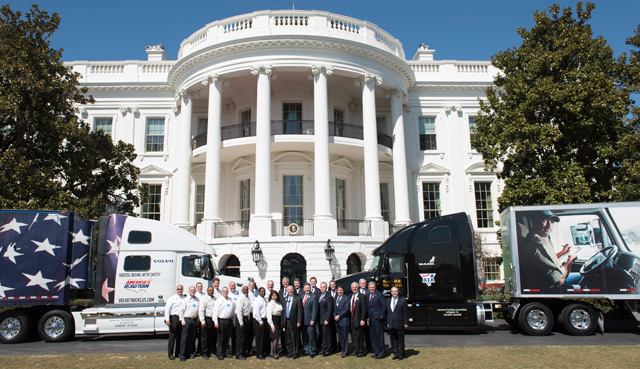 While a vote on Trump’s American Health Care Act had been delayed as of TT’s press time, Spear expressed support for the legislation. “We think this is the bill to get the job done,” he said after the meeting with Trump.

That spirit of optimism hung over the proceedings, which began on the South Lawn of the White House, where two trucks brought by ATA provided the backdrop for a meet-and-greet before the roundtable discussion. One truck driver on hand for the proceedings snapped a selfie with Trump in the cab of one of the trucks. Trump, appearing to enjoy the moment, pulled the truck’s air horn.

In the meeting, he was more serious and expressed gratitude for the industry’s support.

“You’re the biggest truckers in the business, and it’s great to be with you,” he said. “I very much appreciate your support. You are the leaders. No one knows America like truckers know America. We love your spirit.”