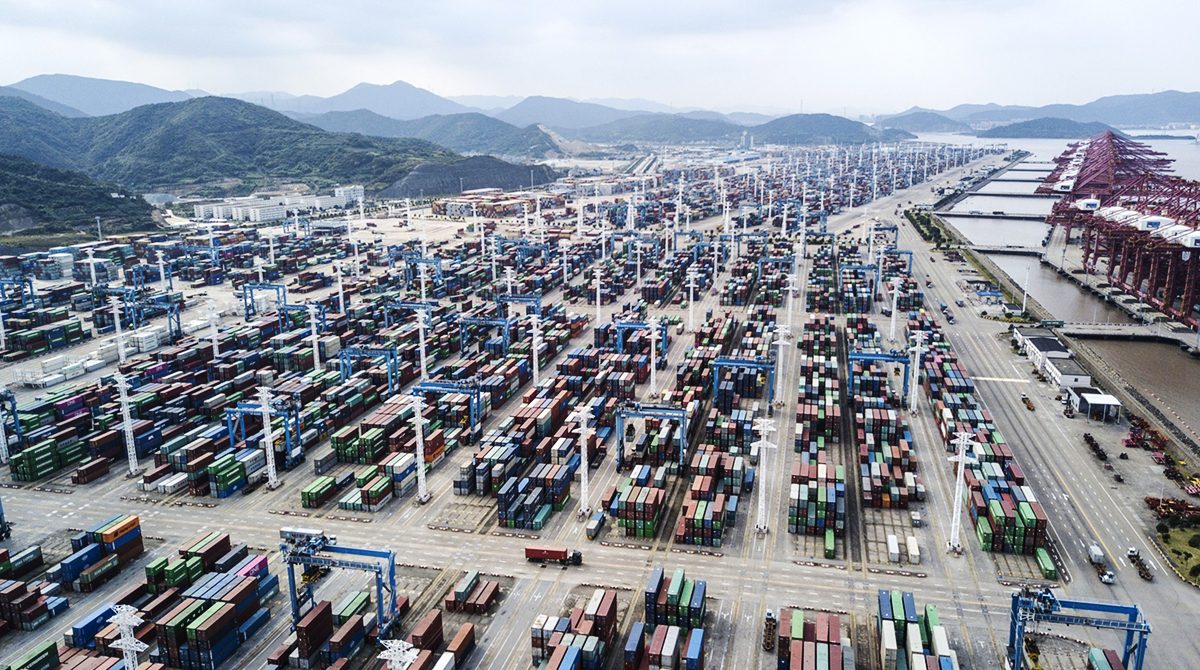 Containers sit stacked next to gantry cranes in this aerial photograph taken above the Port of Ningbo-Zhoushan. (Qilai Shen/Bloomberg News)

A suspension of trucking services in several parts of east China’s Zhejiang province has slowed the transportation of manufactured goods and commodities through one of the world’s most important ports.

Strict controls are in place on trucks moving goods to or from the Beilun district in Ningbo after the discovery of several cases of COVID-19 in the area, shipping line A.P. Moller-Maersk A/S said in a Jan. 6 customer advisory. This suspension, along with restrictions on truckers in some areas in and around Zhejiang, has halted operations at some yards and warehouses at Ningbo port.

The curbs began last week after the city reported an outbreak of COVID-19, which led to the closure of schools, warehouses and companies in the Beilun district near to the port. The first reported infection was an employee of clothing company Shenzhou International Group, and the outbreak is concentrated in that firm’s factory, according to the Global Times newspaper.

“Any delays at Ningbo come at a bad time for global supply chains, which are suffering from the logjams created by the pandemic,” consultant Russell Group Ltd. said in an email. “Unfortunately, the situation may get worse, with the Chinese Lunar New Year, as companies cannot stock up their inventories for the upcoming months, forcing them to either look for alternative shipping or products, all of which will feed into higher costs for the consumer.”

The holiday, celebrated in China and in other parts of Asia, starts around the end of this month and usually means a two-week lull in factory production.

Ports around the world have been struggling to ease congestion as the pandemic heads into a third year. Ningbo is one of the world’s top container gateways and a crucial part of the global supply chains that connects factories in east China to consumers of automobiles, machines, electronics and toys in the U.S., Europe and elsewhere.

The port was partly shut for weeks last August after a COVID-19 outbreak, causing a slowdown in exports, disruptions and congestion across supply lines.

China’s policy of swift and extensive lockdowns in response to even small outbreaks repeatedly has stopped the domestic spread of COVID-19 while allowing companies to continue to produce and export. But it also has led to ripple effects in supply chains and taken a toll on mariners and the shipping industry.

Some polyester factories in Ningbo have stopped work because they can’t receive raw materials via truck or ship out goods, according to analysts at Wood Mackenzie Ltd. Road deliveries of liquefied natural gas, an important fuel for industries unconnected to pipelines, also has slowed.

ENN Energy Holding’s liquefied natural gas terminal on Zhoushan island resumed truck shipments earlier this week, and local officials also are allowing more trucks to pick up gas from Cnooc Ltd.’s terminal at Ningbo port. However, total volumes are far below the 300 to 400 trucks that normally take gas from the port each day, according to Sun Xuelian, an analyst at consultant JLC.

About 10% of trucking capacity in the Ningbo area has recovered, while 20% of drivers are estimated to have been permitted by authorities to resume services, according to Maersk.

China’s Chipmaking Power Grows Despite US Effort to Counter It