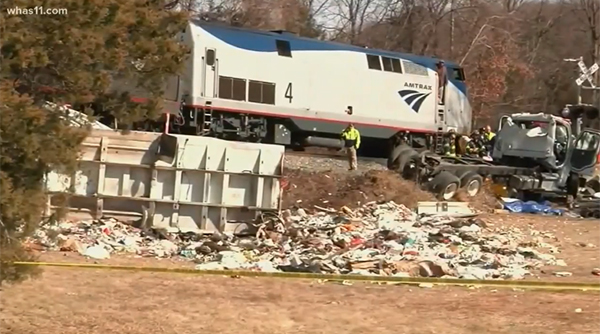 An Amtrak train carrying Republican members of Congress to a party retreat struck a garbage truck outside Charlottesville, Va., on Jan. 31, killing one person on the truck.

There were no serious injuries among the lawmakers and their staff, according to White House spokeswoman Sarah Huckabee Sanders.

Rep. Drew Ferguson (R-Ga.), who sits on the House Transportation and Infrastructure Committee, was among the lawmakers onboard.

According to a statement from Amtrak, the train struck a vehicle on the tracks near Crozet, Va., at 11:20 a.m. ET. Crozet is about 12 miles west of Charlottesville.

Amtrak spokeswoman Kimberly Woods said that two Amtrak crew members and three passengers were transported to a local hospital with minor injuries. She added that the National Transportation Safety Board is investigating and alternate transportation has been arranged.

The train was carrying Republican lawmakers, as well as some of their aides and family members. They were heading to a retreat in White Sulphur Springs, W.Va., about 70 miles northwest of Roanoke, Va.

More than a dozen lawmakers were on the train. They were scheduled to hear both President Donald Trump and Vice President Mike Pence speak.

We are moving. Back to Charlottesville where we will transfer to buses. Please keep praying for the truck driver’s loved ones and other’s injured. pic.twitter.com/yBULqkYbBB — Rep. Mark Walker (@RepMarkWalker) January 31, 2018

According to CNN, other members on the train included:

The accident comes one day after Trump delivered his State of the Union address, at which he expressed the need to rebuild the country’s infrastructure with a $1.5-trillion investment plan.

“As we rebuild our industries, it is also time to rebuild our crumbling infrastructure,” Trump said. “Together, we can reclaim our building heritage. We will build gleaming new roads, bridges, highways, railways, and waterways across our land. And we will do it with American heart, American hands, and American grit.”