Daimler, Bosch and others are working on big rigs and buses that leave diesel behind 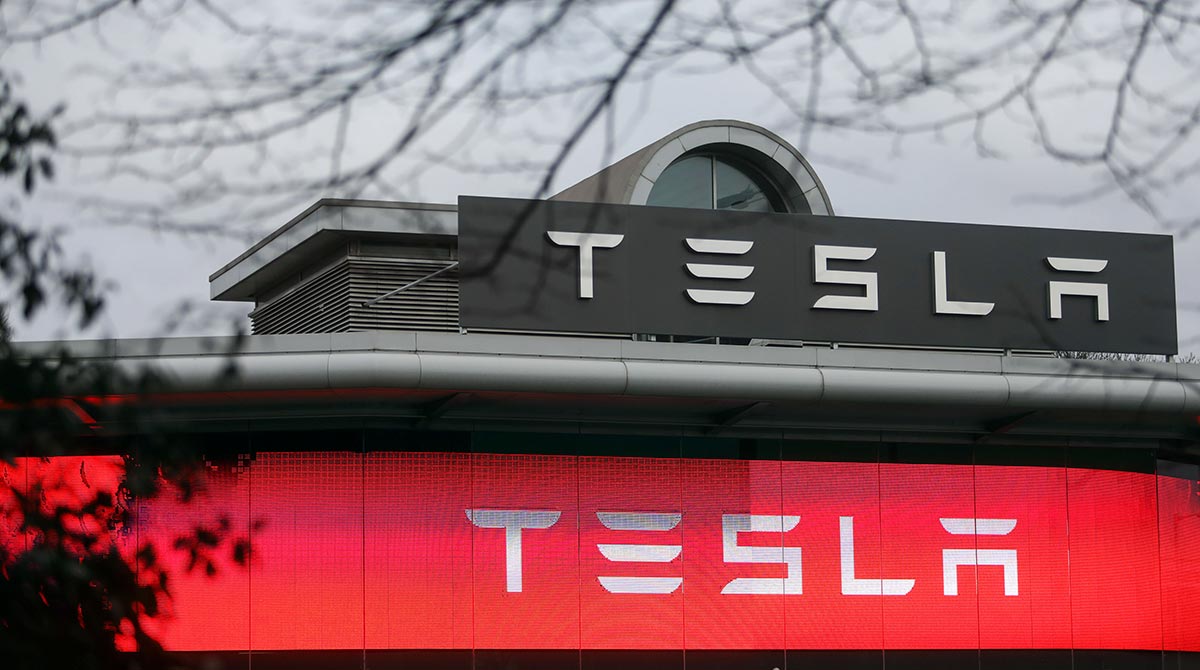 Tesla Inc. will unveil its electric Tesla semi-truck Nov. 16 in southern California. It’s all part of CEO Elon Musk’s “Master Plan Part Deux” in which he vowed to expand the company’s lineup to “cover the major forms of terrestrial transport.” Expect another late-night party stocked with friends and fans, potential Tesla semi customers and state and local elected officials.

Among the details that will help gauge the semi’s viability will be total cost of ownership as measured by cost of energy per mile, range, level of autonomy and infrastructure needs. Will there be Super Superchargers? Where is Tesla planning to make this truck? Musk may have some answers.

Tesla Semi Truck unveil to be webcast live on Thursday at 8pm! This will blow your mind clear out of your skull and into an alternate dimension. Just need to find my portal gun ...

While electric passenger cars get all the buzz, the move to electrify big rigs — as well as transit buses — has been moving swiftly under the radar, and Tesla is far from the only player. The urgency is particularly acute in California, where trucks are a big part of the state’s emissions profile and buses are the primary form of transport for many low-income residents.

Air quality and asthma rates near container ports have long been a major public health issue. Earlier this month, the ports of Los Angeles and Long Beach approved a plan to encourage the phase-out of diesel trucks in favor of natural gas or zero-emission vehicles (ZEV). And the California Air Resources Board, a powerful state agency that’s pushed the auto industry into electrification, is proposing the start of something similar.

The agency’s Advanced Clean Local Trucks plan seeks to accelerate the early market for zero-emission trucks, proposing that trucking manufacturers make sure that 2.5% of all California sales are zero emission starting in 2023—and that target quickly rises to 15% by 2030.

“The biggest emissions impact is in the freight, goods movement and logistics sector,” said Mary Nichols, chairwoman of the Air Resources Board. “The success of the ZEV mandate for passenger cars can be replicated for trucks. By having a mandate out there, you have a market pull.”

Trucking is a diverse market, spanning both managed fleets and independent owner-operators. It includes long haul routes and smaller trucks that do package delivery within cities.

Some Tesla rivals are developing both. Here’s a brief but by no means definitive snapshot of some key players in the world of big electric vehicles Musk is about to enter: 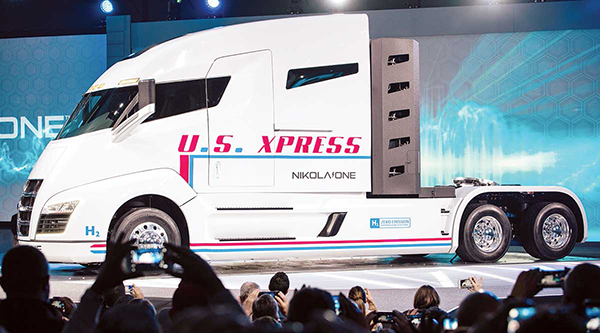 The German supplier has partnered with Nikola Motor Co. to develop a class 8 hydrogen-electric truck by 2021. “Electrification of commercial vehicles is reaching a point in the near future where they will be less costly to operate than diesel counterparts—under certain circumstances,” said Jason Roycht, vice president of Bosch’s commercial vehicle business in North America. “There’s a potential for total cost shift that favors electrification. We’re all excited and nervous in the same spot, because if it really comes to realization, the change will happen quite fast.” 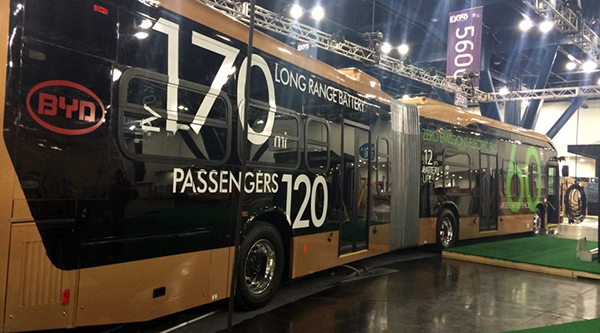 Backed by billionaire investor Warren Buffett, the Chinese company makes fully electric trucks, including a Class 8, a Class 6 and a Class 5 (The higher the class, the heavier the truck). BYD said it has orders for electric trucks from customers including UPS, Goodwill, BNSF Railway and tenants of the Ports of Los Angeles, Long Beach and San Diego.

On Nov. 13, BYD delivered its first Class 8 trash truck to the city of Palo Alto. The company also has a 450,000 square foot electric bus manufacturing facility in Lancaster, California. BYD’s electric bus customers include Stanford University and the Kansas City International Airport; they expect to deliver over 1,000 buses in the next two years.

“If you electrify one bus, it’s the equivalent of electrifying 40 consumer cars,” said Stella Li, the president of BYD Motors. “If we can upgrade public transit to electric buses the rider will be more comfortable and enjoy a quieter ride. It’s a superior consumer experience.” 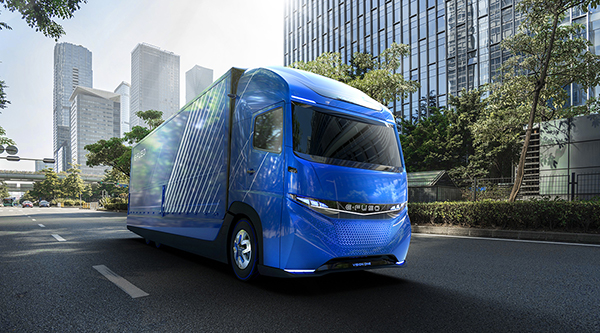 Daimler Trucks encompasses many brands, including Mercedes-Benz, Freightliner, FUSO, Western Star and BharatBenz. The company recently unveiled its new Fuso eCanter, an electric light-duty truck produced under the FUSO brand. The hauler has a range of 60 to 80 miles between charges, depending on body, load and usage. The E-Fuso Vision One prototype can carry 11 tons of cargo 220 miles before charging. 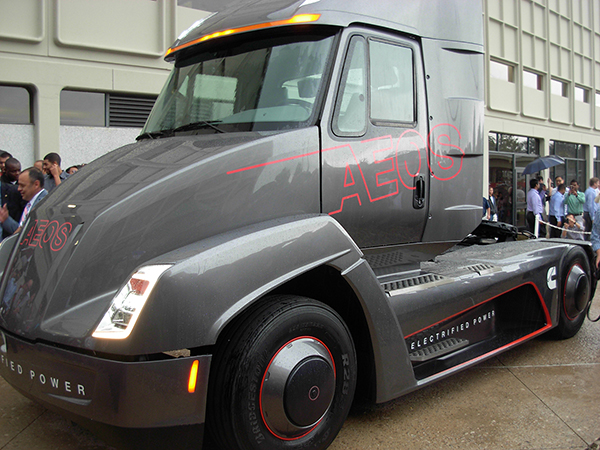 In late August, Indiana-based Cummins, a leader of making diesel and natural gas engines, revealed “Aeos”, a fully electric Class 7 truck that has a range of about 100 miles on a single charge for city driving. Production begins in 2019. Cummins noted that the weight of the electric powertrain is roughly equivalent to the weight of the removed engine, transmission and fuel tank. 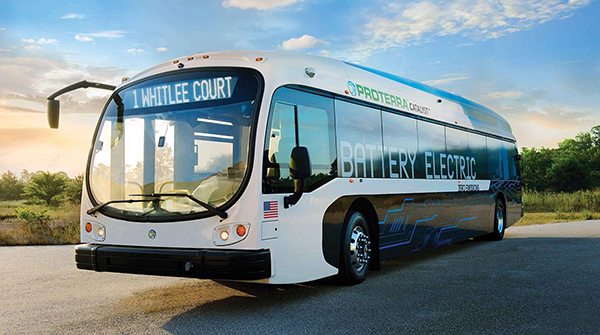 The Silicon Valley maker of electric buses counts a lot of former Tesla executives on its management team and former U.S. Vice President Al Gore’s investment firm among its backers. Proterra has sold its electric buses to cities including Seattle, Dallas and Philadelphia. San Jose, California, just approved the purchase of 10 buses for use at the Norman Y. Mineta San Jose International Airport.

Los Angeles Metro, one of the largest transit agencies in America, has pledged to convert its entire 2,200 bus fleet to fully zero-emission by 2030.

With assistance by Gabrielle Coppola