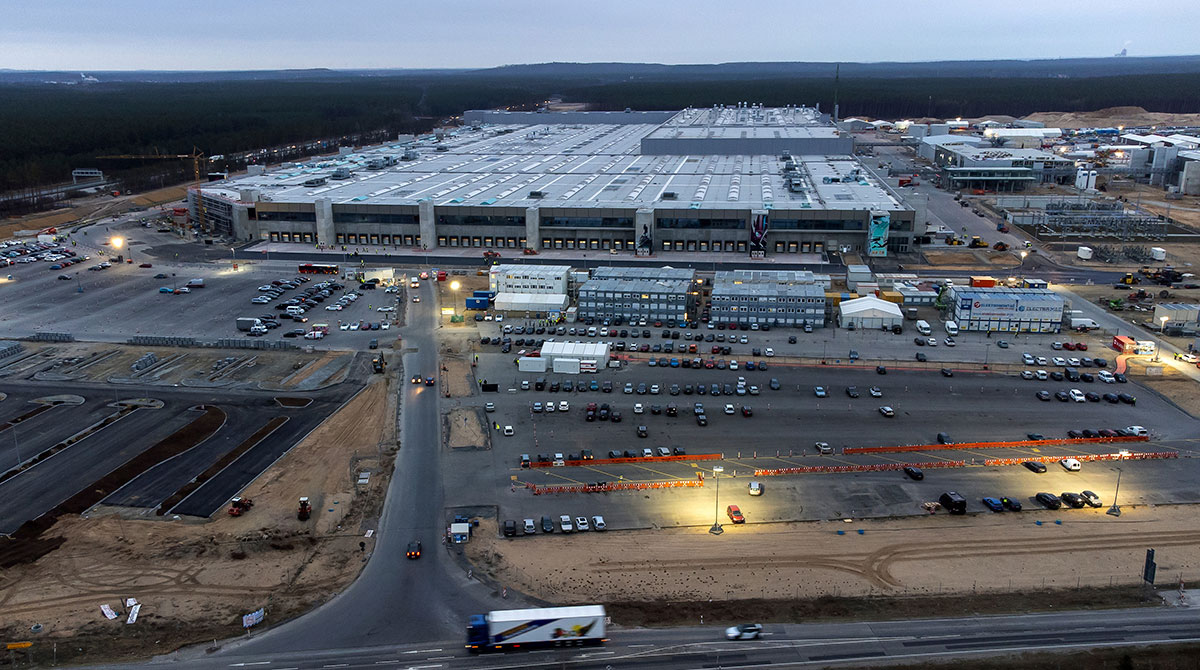 The construction site of the new Tesla Gigafactory for electric cars is pictured in Gruenheide near Berlin. (Michael Sohn/Associated Press)

However, the company’s sales were slightly below expectations, which were looking for Tesla to produce 312,000 cars, according to Wedbush Securities. But the sales increase came even as Tesla battled a global shortage of computer chips and other parts.

Tesla’s old quarterly delivery record of 308,600 vehicles was set just one quarter ago, from October through December 2021. Tesla delivered 185,000 vehicles in the first quarter of last year.

The global computer chip shortage has bedeviled nearly all automakers, but Tesla seems to have dealt with the shortages better than the rest of the industry. Wedbush analysts said they believe 20,000 to 25,000 sales that would have happened in the first quarter now have been pushed into the second quarter due to supply and logistics issues.

“We remain steadfastly bullish on the Tesla story and believe when factoring in all the manufacturing headwind dynamics this was a modestly bullish print,” Wedbush analysts said in a note.

The company said in February that it expects 50% annual growth in sales, meaning it expects about 1.4 million vehicles to be delivered this year. But on a conference call with analysts, CEO Elon Musk said the chip shortage would stop the company from rolling out any new models this year.

Morgan Stanley Analyst Adam Jonas wrote in an investor note last week that he expected 320,000 to 325,000 deliveries from January through March, more than most analysts.

“Given extraordinary supply chain pressures and Tesla’s continued significant price increases, we believe a path to (full year) deliveries of over 1.4 million units would be impressive, but in our minds, difficult in isolation to move the stock from here,” Jonas wrote.

The company opened its new factory in Germany late in the first quarter, and last year it started building the Model Y small SUV at a new factory near Austin, Texas.

Also on April 4, Bloomberg reported that Musk has taken a 9.2% stake in Twitter Inc. to become the platform’s biggest shareholder, a week after hinting he might shake up the social media industry.

Twitter shares surged about 26% in premarket trading after Musk’s purchase was revealed April 4 in a regulatory filing. The stake is worth about $2.89 billion.

Musk, 50, polled his more than 80 million followers on Twitter last month, asking them whether the company adheres to the principles of free speech. After more than 70% said no, he asked whether a new platform was needed and said he was giving serious thought to starting his own.