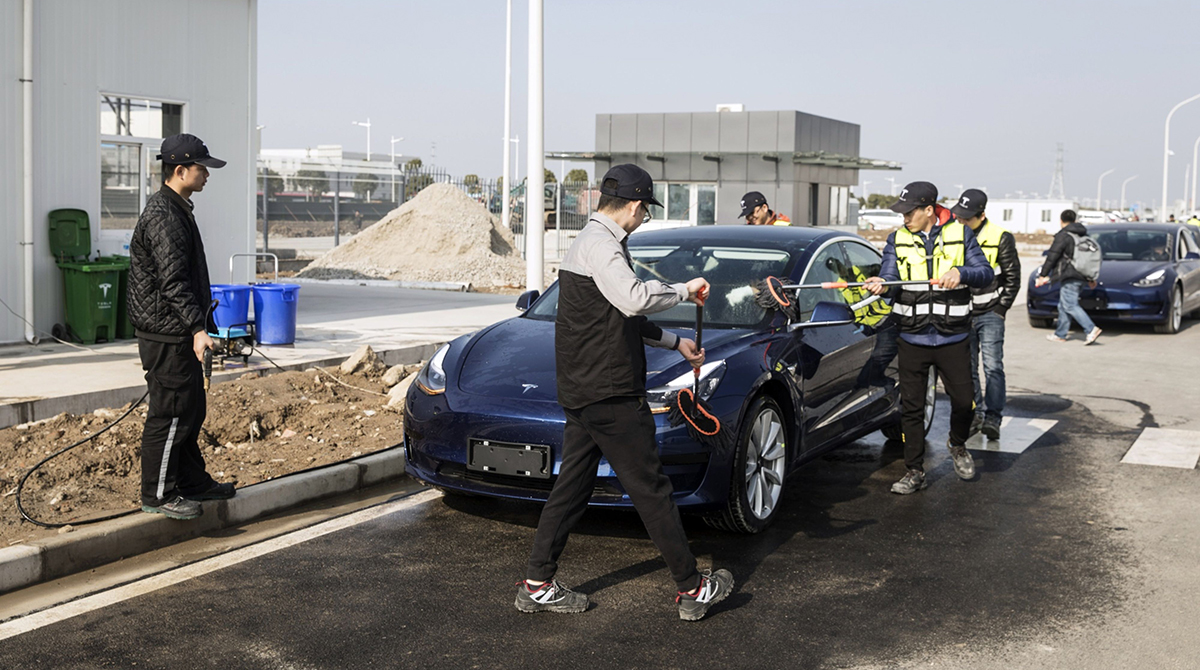 Tesla Inc. delivered its first China-built cars, a milestone for Elon Musk’s company as it accelerates a push in the world’s largest electric-vehicle market.

The company handed over the first 15 Model 3 sedans assembled at Tesla’s new multibillion-dollar Shanghai plant — its first outside the U.S. — to company employees at the facility Dec. 30. More workers will receive vehicles over the next couple of days, and deliveries to customers will start in January, company officials said at the ceremony.

The Chinese plant represents a cornerstone of CEO Musk’s plans to make Tesla a truly global carmaker. The company in November announced plans to build a factory in Germany to cater to burgeoning European demand for electric cars.

The China plant could also help Musk build on recent momentum for the company in the world’s largest market both for EVs and autos in general. The Model 3 will compete with electric cars from local contenders such as NIO Inc. and Xpeng Motors, as well as global manufacturers including BMW AG and Daimler AG.

Demand for the locally built Model 3 is “very good,” and Tesla is confident it will sell all vehicles manufactured at the site, Allan Wang, general manager of Tesla China, said at the plant. “Our aim is to kill all internal-combustion engine cars.”

While deliveries to customers haven’t started, the Dec. 30 milestone caps several months of wins for Musk. The latest came Dec. 27, when the locally built car was included on a list of vehicles qualifying for an exemption from a 10% purchase tax in China.

The plant is now producing more than 1,000 cars a week, and aims to double the rate over the next year, said Song Gang, the factory’s manufacturing director. That means the facility has met a prediction Musk made back in April.

Tesla’s original and for long its only car factory in Fremont, Calif., spent months trying to hit a 1,000 weekly rate. Musk has said a weekly rate of 3,000 in Shanghai is a target at some point.

The German manufacturing base near Berlin will allow Tesla to better challenge its European premium rivals in their backyard. Musk estimated this year that the European gigafactory probably won’t be operational until 2021.

A crowd of about 200 people, including media and Tesla workers, had gathered inside the Shanghai plant Dec. 30 and clapped and cheered as Tom Zhu, the company’s head of greater China, handed over the first cars. One of the employees receiving a car presented it to his girlfriend, along with flowers, and proposed to her. She accepted by nodding, and they kissed. 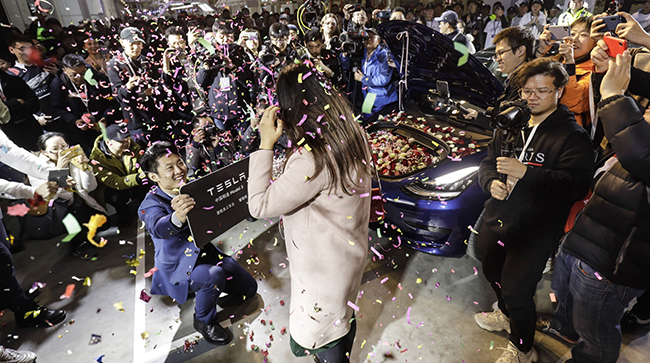 A worker proposes to his girlfriend at the event. (Qilai Shen/Bloomberg News)

The Shanghai Gigafactory broke ground at the start of this year. Originally just a muddy plot about a 90-minute drive away from Shanghai’s city center, it is now a crucial test of Musk’s bid to keep his carmaker profitable as he bets big on Chinese appetite for electric cars.

With Tesla’s volatile stock price and strained finances, investors will be watching closely how the ramp-up unfolds. The multibillion-dollar investment will be a deciding factor to determine whether Tesla will be able to take on local competitors and fend off challenges by the likes of Mercedes-Benz, BMW and Audi.

As part of its China expansion, Tesla plans to add dozens of locations in the country over the next year for showcasing its vehicles and providing charging and other services, Xue Juncheng, director of China after-sales, said at the ceremony.

Tesla said in October the locally built Model 3 will be priced from about $50,000. On top of the tax exemption announced Dec. 27, the China-built model this month qualified for a government subsidy of as much as about 25,000 yuan ($3,600) per vehicle.

The company may lower the price of the locally assembled sedans by 20% or more next year as it starts using more local components and reduces costs, people familiar with the matter have said.

About 30% of the parts now used by the Shanghai facility are sourced locally, and the company plans to increase that to 100% by the end of 2020, said Song, the manufacturing director.