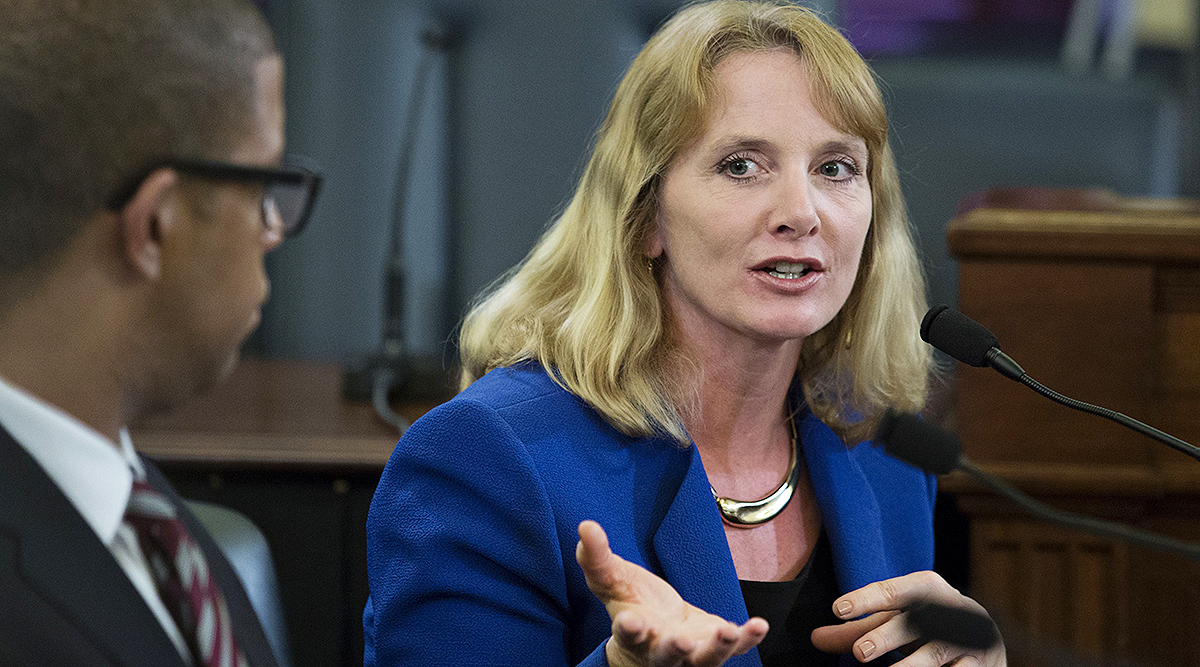 Missy Cummings at a Senate Committee on Commerce, Science, and Transportation hearing in 2016. (Drew Angerer/Bloomberg News)

Elon Musk and thousands of Tesla Inc.’s die-hard fans and customers are in an uproar about NHTSA’s new pick as its senior safety adviser.

Their target is Mary “Missy” Cummings, a Duke University professor critical of Tesla’s Autopilot software who was chosen this week for the National Highway Traffic Safety Administration role. The former U.S. Navy pilot is also on the board of Veoneer, a Swedish company that is being acquired by Qualcomm Inc. Musk, Tesla’s CEO, has scorned the laser-based technology called lidar that’s promoted by Veoneer and has been adopted by rival automakers.

“Objectively, her track record is extremely biased against Tesla,” Musk wrote in a Twitter post Oct. 19. By the afternoon of Oct. 20, Tesla supporters calling themselves “Autopilot Users for Progress” were just about to reach their 10,000-signature goal for a petition on Change.org urging President Joe Biden, Vice President Kamala Harris, NHTSA and the Office of Personnel Management to review the appointment.

Objectively, her track record is extremely biased against Tesla

Cummings responded to Musk with a tweet of her own, saying she would be “happy to sit down and talk with you anytime.’

NHTSA has launched several crash investigations into Tesla’s Autopilot technology. In August, the agency opened a defect investigation that focuses on Autopilot and crashes into fire trucks, police cars and first-responder scenes.

Cummings in 2020 called it laughable that Tesla had promoted the era as the year of the robotaxi, saying that her lab’s experiments showed Autopilot “was not even close to being ready.” It’s only in recent weeks that Tesla has been rolling out a beta version of what it calls “FSD” software, for Full Self Driving, to select customers and employees.

LMAO...there is NO WAY Tesla will have a viable robo-taxi service this year. My lab has been running controlled experiments on Tesla Autopilot & I can say with certainty that they are not even close to being ready. My student on this project should get hazardous duty pay. https://t.co/fumYbh9Jqx

Cummings would be considered a federal employee under the Ethics in Government Act, so any possible conflicts of interest likely will be resolved before she begins at NHTSA. The agency said it is “delighted to welcome Dr. Cummings to our team and look forward to leveraging her experience and leadership in safety and autonomous technologies.”