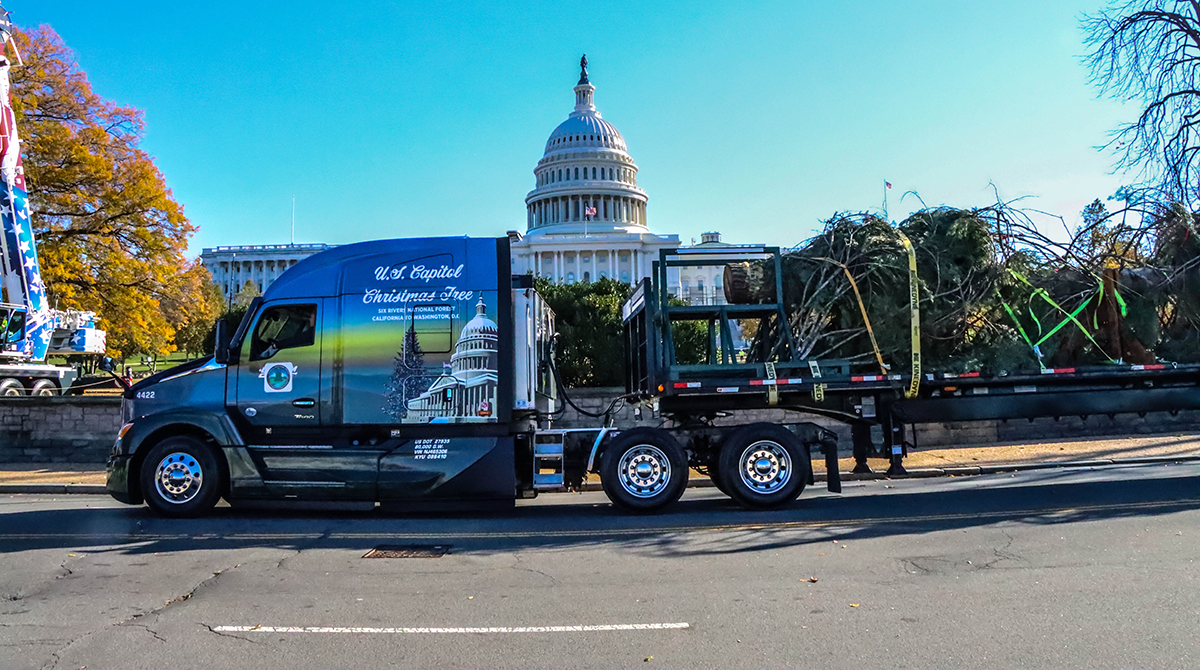 The truck and tree in front of the Capitol Building. (James Edward Mills)

WASHINGTON — A truckload of holiday cheer has appeared at the U.S. Capitol Building with the arrival of an 84-foot white fir, made possible by committed industry partnerships.

PHOTOS: See part of the journey for this year's Capitol Christmas Tree

The 2021 Capitol Christmas Tree began its journey in California on Oct. 23, in the Mad River Ranger District of the Six Rivers National Forest. It was driven cross-country by the official designated tour carrier, System Transport, a division of Trans-System Inc, which ranks No. 95 on the Transport Topics Top 100 list of the largest for-hire carriers in North America.

The tree, one of the largest ever chosen, was hauled by a Kenworth Truck Co. T680 Next Generation, marking the eighth straight year that a Kenworth truck has been used to deliver the Capitol Christmas Tree.

“It’s been quite an honor for us to be a part of this. It’s something that we definitely look forward to every year,” Genevieve Bekkerus, director of marketing at Kenworth, told Transport Topics. 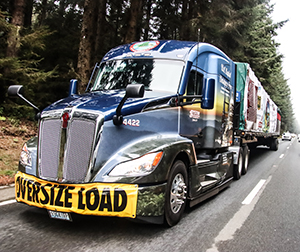 The truck on the road near Eureka, Calif. (James Edward Mills)

A tradition that has endured for 51 years, the Capitol Christmas Tree — also referred to as the “People’s Tree” — is a project of the U.S. Forest Service and its many partners. It’s not a short process; planning begins nearly a year before each tree begins its journey to Washington and each year a different state or area is selected.

“This project would not be possible without partners and without partnerships. It’s a Forest Service project, but really, truly where the magic happens is partnerships, and in particular, those in the trucking industry that help us bring this project to life every year,” said Jodi Massey, director of communications and sponsorships for Choose Outdoors, a key nonprofit partner involved in the coordination efforts.

System Transport tapped six drivers to help move the tree, although much of the driving was done by two teams.

Jeremy Bellinger, who has driven 21 years and 2.5 million miles with the company, noted his excitement when he learned System Transport would be tasked with hauling the tree, saying he immediately called his boss to throw his hat in the ring.

But for the drivers, hauling a Capitol Christmas Tree is a bit different than a traditional load. This year, there were about 25 stops along the way, ranging from large events to smaller, rural areas, with a particular focus on the tree’s home state of California. 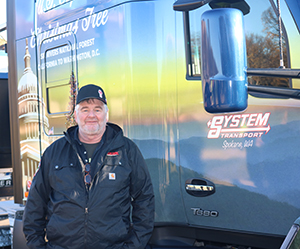 Bellinger listed another meaningful stop, at the CoxHealth Dee Ann White Women and Children’s Hospital. “The children’s hospital in Springfield, Mo., we backed up in front of the hospital and the kids were coming out to the windows,” he said. “They were happy to see the truck.”

The truck even made a visit to the Kenworth plant where it was constructed in Chillicothe, Ohio.

“The folks there, at the Chillicothe plant, were really, really impressed with the event. They were really happy to see their product on the road,” Kenworth’s Bekkerus said. “There’s so much passion and so much pride that goes into every build.”

The stops provide the opportunity for the public to view the tree and learn about its journey. In addition to the tree, there’s a display and a large banner that visitors can sign. The 2021 theme for the U.S. Capitol Christmas Tree is “Six Rivers, Many Peoples, One Tree,” a nod to the tree’s origin.

“We brought a small piece of a California national forest that’s famous for its redwoods, famous for its sequioas. And we brought it to each community that we went to,” Samantha Reho, a spokesperson for the U.S. Forest Service, told TT. And she noted none of it would be possible without the partnership of the dedicated drivers hauling the tree. “They’re kind of our Santas,” she said.

The tree, which stands on the West Lawn of the U.S. Capitol Building, will be lit at a ceremony Dec. 1.