States Mobilize to Repair I-40 Bridge, but Closure Likely to Remain for Months 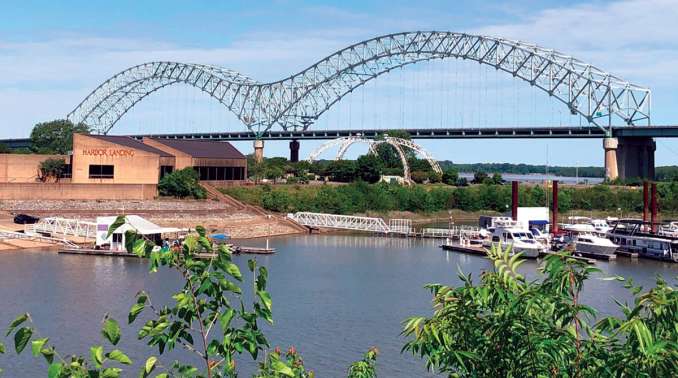 A crack in a steel beam has forced the closure of the I-40 bridge that connects Arkansas and Tennessee. (Adrian Sainz/Associated Press)

The ongoing Interstate 40 bridge closure is a costly interruption for the trucking industry that will likely stretch on for months.

A contract has recently been awarded for emergency repair.

Known as the Hernando de Soto Bridge, the structure carries I-40 across the Mississippi River and links Memphis, Tenn., and West Memphis, Ark. The bridge was closed to vehicular and marine traffic May 11 after a mechanical fracture was discovered during a routine inspection. It remains closed.

However, on May 14, waterway restrictions for vessels moving beneath the bridge were lifted. 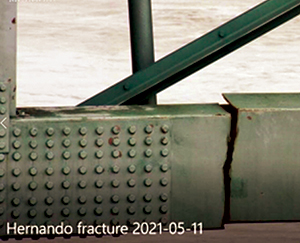 The crack in the I-40 bridge. (Tennessee DOT)

Donna England, vice president of safety and member services at the Tennessee Trucking Association, said the closure may lead to a hike in prices on goods and an increase in rates for shippers.

“Freight is like water,” Newton said. “It will continue to flow. Our industry will continue to make deliveries. But if the additional expense is prolonged, it is likely to be passed on to consumers.”

According to the Arkansas Trucking Association, the I-40 bridge typically carries about 40,000 vehicles daily, some 12,500 of which are commercial trucks.

Tennessee Department of Transportation Commissioner Clay Bright announced May 17 a contract has been awarded to Kiewit Infrastructure Group for the emergency repair of the I-40 bridge.

The repair will be completed in two phases. The first, which is expected to be completed before Memorial Day, will require the installation of steel plating to provide stability for work crews. The second will involve the removal and replacement of the fractured section. During a joint press conference May 18, state officials said they estimate the second phase will take several months. Both phases will need to be completed before traffic can resume.

In the meantime, traffic is being diverted to the Memphis & Arkansas Bridge, which carries I-55 over the Mississippi River and is located about three miles south of the I-40 bridge. The Arkansas Trucking Association estimated the I-55 bridge already carried about 55,000 vehicles per day, some 14,000 of which are trucks.

The U.S. Department of Transportation’s Bureau of Transportation Statistics released data May 17 indicating the bridge closure will be a challenge to the multimodal industry. The mixing of interstate traffic is creating extensive travel delays on the I-55 bridge. According to BTS, travel times on this portion of I-55 during afternoon rush hour on May 10 were about 15 minutes for eastbound and westbound traffic. As of May 12, travel times on this stretch during afternoon rush hour had ballooned to 75 minutes for eastbound traffic and 50 minutes for westbound traffic.

England said the association’s carriers are making sure their drivers are hitting the road earlier in order to avoid the morning and afternoon rush hours. 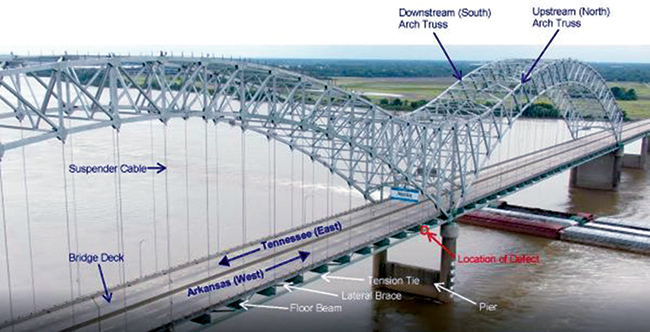 A diagram of important points on the bridge, including the location of the crack. (Tennessee DOT)

Donnie Williams, executive director of the Supply Chain Management Research Center at the University of Arkansas, said these delays for truckers are going to place a greater constraint on capacity issues, including challenges associated with hours-of-service requirements.

Williams identified Memphis as a “logistics cluster” because of its heavy freight activity. FedEx Corp. is based in Memphis.

Additionally, TDOT has dedicated teams and drones to review new and previous inspection footage for the I-55 bridge.

From our #40MSRiverBridge Press Conference: Photo of fracture pulled from 2019 Drone Footage and an example of a snooper, a piece of equipment we use to inspect the underside of bridge structures. pic.twitter.com/kyotAAcFvj — Arkansas DOT (@myARDOT) May 17, 2021

Matthew Cate, a research leader at the University of Tennessee’s Center for Transportation Research, said because all those vehicles are getting funneled over a single structure, the traffic pattern is more vulnerable to the effects of an incident.

“Even a fender bender is going to have a far greater impact if we have something happen on that portion of I-55 than it would’ve with both bridges open,” Cate told TT.