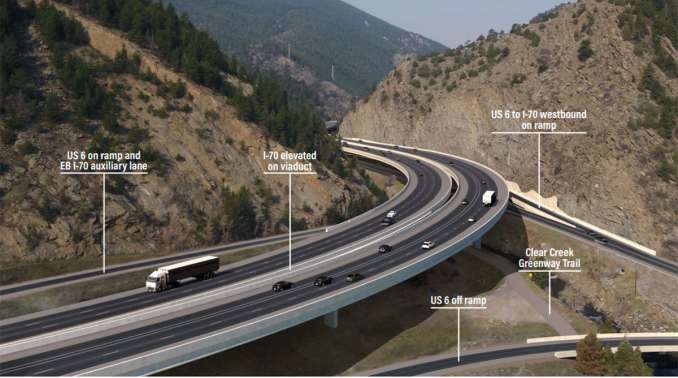 A $700 million project to improve a notorious mountain bottleneck on Interstate 70 in Colorado is being lauded by stakeholders in the state and Transportation Secretary Pete Buttigieg.

Buttigieg joined state politicians, transportation officials and trucking representatives Feb. 24 beneath an I-70 overpass at the Floyd Hill bottleneck to discuss the use of state and federal funds to improve freight transportation and traffic flows in the key 8-mile mountain corridor.

“This is part of what America’s supply chains look like and when trucks are backed up and unable to get to where they need to go in a timely fashion, that is something we will see in shipping time and in prices at the store even if you don’t yourself traverse this I-70 corridor,” Buttigieg said. “As complex as the costs of these supply chain disruptions are, the impact is very simple, which is Americans are waiting longer and paying more for goods that they need. And that is one of the reasons why we have such a sense of purpose in deploying these infrastructure resources.”

Colorado is investing $700 million to make I-70 safer and more efficient for residents and truck drivers. We're on the ground looking at how this project improves our supply chain and helps people travel more smoothly. pic.twitter.com/ADgdaDkKeY — Secretary Pete Buttigieg (@SecretaryPete) February 24, 2022

Gov. Jared Polis noted the importance of state and federal funds to renovate I-70 because it has not been updated since the 1960s despite changes in the state, including significant population increases.

Sen. John Hickenlooper (D-Colo.) said, “We’ve put some money into the infrastructure, but not nearly enough.”

Colorado would receive $4 billion over five years in federal funding for highways and bridges under the bipartisan infrastructure law. 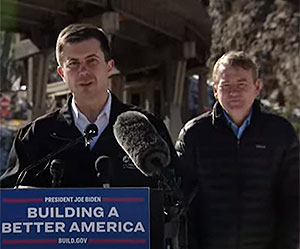 Transportation Secretary Pete Buttigieg (left) and Sen. Michael Bennet (D-Colo.) at the I-70 overpass at the Floyd Hill bottleneck on Feb. 24. (9News via YouTube)

Greg Fulton, president and CEO of the Colorado Motor Carriers Association, participated in the event. Afterward he said he appreciated that Buttigieg and Colorado’s top government leaders gathered there to recognize the importance of freight movement on I-70.

“Any sort of relief we can get is important because I-70, particularly on weekends during ski season or the summer, looks like a giant parking lot at times,” Fulton said.

This area of traffic congestion is not among the top 100 bottlenecks identified by the American Transportation Research Institute.

The mountain corridor also is important to interstate commerce because truckers convey fuel and food from the Denver area to western Colorado. At the same time, the state is a major national supplier of beef and agricultural products transported over I-70.

Tamara Rollison, spokeswoman for the Colorado Department of Transportation, said the project will add truck climbing lanes that don’t exist now and that will “be good news for truckers.”

According to DOT, adding an auxiliary lane from the U.S. 6 interchange to eastbound I-70 to go up the steep 7% grade will help drivers of trucks and other heavy vehicles maintain speed going up Floyd Hill and not block the general-purpose lanes. Other benefits for truckers will include:

Freight trucking considerations were included in the project since the Colorado Motor Carriers Association participated in its development.

Rollison said construction will begin later this year on smaller aspects such as roundabouts, improved parking and wildlife crossings as DOT prepares for the big construction project. The project involves elevating I-70 above the canyon.