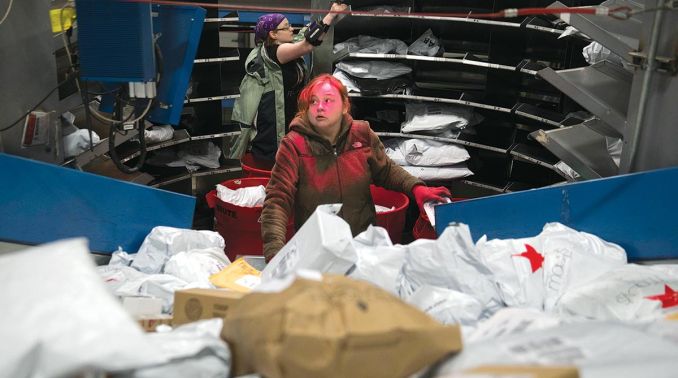 UPS Inc., FedEx and the U.S. Postal Service have sizable operations in the Lehigh Valley area of Pennsylvania and have ramped up operations by hiring hundreds of seasonal employees to handle an expected surge in holiday orders.

As for what’s driving the demand, look no further than your laptop, tablet or smartphone and the likely bookmarks of Amazon.com and Walmart.com in your browser. In fact, the National Retail Federation expects holiday retail sales in November and December to increase between 3.6% and 4% over last year, a forecast boosted by anticipated online and other nonstore sales growth of between 11% and 15%.

RELATED: Will your holiday package be delivered on time? Ask the drivers working 70 hours this week

The flood of online orders has caused some headaches for UPS, leading to delivery delays of one or two days for some customers earlier this month. A company spokesman said UPS planned to hire more seasonal workers and use more automation to meet demand for what it expects will be a record-breaking holiday season. UPS plans to deliver more than 750 million packages globally between Thanksgiving and New Year’s Eve, which would be a 5% increase over last year.

In the Lehigh Valley, UPS spokesman Dan McMackin said the company’s initial seasonal hiring numbers show it was looking to hire 763 people for its facility on Highland Avenue in Bethlehem Township and another 523 at its warehouse on Eastgate Boulevard in Lower Nazareth Township. “While we have filled some of these positions, there are still positions open at most facilities and we are still actively hiring,” he said.

While McMackin did not have last year’s seasonal hiring figures handy, the projected 523 hires for the Lower Nazareth facility would mark an increase from the 340 the company planned for the 341,400-square-foot warehouse last year. The seasonal positions typically run through the end of January, when UPS is still busy sorting through all those returned packages from the holidays.

RELATED: Here’s what you need to know about holiday shipping deadlines

This also is the season when the U.S. Postal Service’s Lehigh Valley Processing & Distribution Center in Bethlehem Township, is cranking out packages.

Karen Mazurkiewicz, the USPS spokeswoman covering central Pennsylvania and western New York, said the facility expects to handle about 3.6 million packages this holiday season, which would be up about 10% from last year. The facility employs about 520 people, including roughly a dozen seasonal workers, she added.

“The Postal Service is continuing to meet the peak holiday demand,” Mazurkiewicz said. “We have planned for this holiday season all year long and have flexed our network and expanded delivery hours to accommodate increased volume.”

In addition, she noted, several post offices are having carriers do package delivery in the morning, delivering their regular route during the day and, if warranted, making more package deliveries at day’s end. Some carriers also are delivering on Sundays, she said.

As such, USPS is asking customers to leave their lights on, have their dogs restrained and, if it snows, keep a path to the mailbox clear to help facilitate deliveries.

And with Christmas less than two weeks away and high demand expected, it might be a good idea to order that new 4K TV, smartphone or whatever else sooner rather than later.