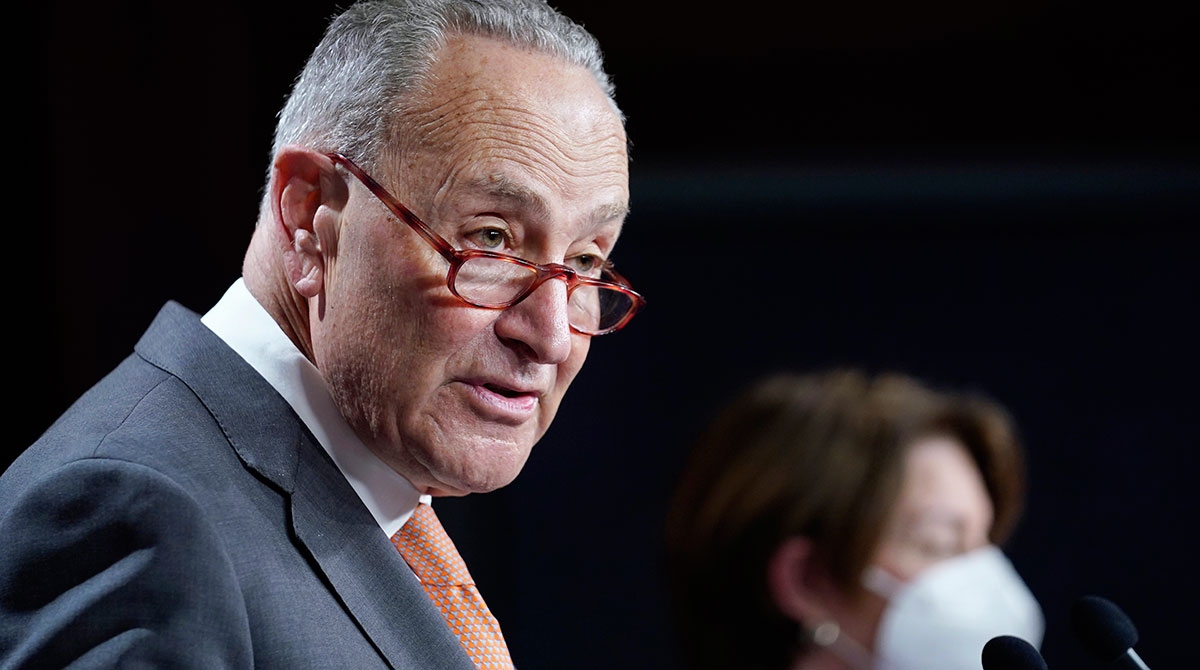 Schumer speaks during a news conference on Capitol Hill on Jan. 4, 2022. (Susan Walsh/AP)

Senate Majority Leader Chuck Schumer (D-N.Y.), aiming to advance voting rights legislation this month, affirmed negotiations are ongoing between his caucus and the White House as he readies efforts to advance the nearly $2 trillion House-passed Build Back Better Act. He has not set a date for considering that budget bill this year.

For the legislation to advance in the Senate, Schumer needs unification from the 50-member Democratic caucus. Thus far, Sen. Joe Manchin (D-W.Va.) has expressed a need for additional time to examine the bill’s impact on the economy.

“I talked to Sen. Manchin numerous times during the break,” Schumer told reporters on Capitol Hill on Jan. 4. “I believe the Biden administration will be having discussions with Manchin, with his cooperation and participation on [Build Back Better] as we move forward.”

Manchin recently told reporters that concerns over inflation, as well as developments with COVID-19 and foreign policy, are influencing his decision-making. His opposition to the $1.7 trillion package contributed to its halting last month.

“Inflation is still a concern,” Manchin said this month. “These are all challenges, guys. And this is all expensive challenges.”

“In Congress, we will continue to prioritize a legislative path for Build Back Better, focused on taking the current text of the legislation passed by the House, keeping as much of it as possible — but no less than the elements contained in the framework negotiated by the president and committed to by Sens. Manchin and Sinema some months ago,” Jayapal said.

She went on, “We have worked too long and too hard to give up now, and we have no intention of doing so.”

Republicans, on the other hand, remain unified in their opposition to the budget bill. Senate GOP leaders continue to criticize the measure.

“The Democrats’ wasteful spending last spring helped ignite the worst inflation in 40 years. But our colleagues spent the rest of 2021 trying to assemble another, even bigger, even more reckless taxing and spending spree,” Senate Republican Leader Mitch McConnell of Kentucky said this month. “Their reaction to the rising prices and family hardships their policies caused was to try to inflate their way out of inflation.”

On matters related to transportation, the Build Back Better Act would dedicate $600 million for Maritime Administration projects that would alleviate congestion at ports. The U.S. Department of Transportation would receive $300 million to develop and apply low-emission aviation programs. The National Highway Traffic Safety Administration would receive nearly $50 million to ensure equity in traffic enforcement statewide.

Meanwhile, on the other side of Pennsylvania Avenue, John Porcari, the White House’s ports envoy, said the administration is ramping up efforts to facilitate the movement of freight along supply chains. He also indicated his team is monitoring potential COVID-19 omicron-related disruptions at domestic and international ports.

Tune in for a briefing with Press Secretary Jen Psaki and John D. Porcari. https://t.co/Ed9yNzAdRA

“When bottlenecks emerge in the global supply chain, it can take more time for goods to reach store shelves, which can lead to price increases. That’s why the president has taken such aggressive action to alleviate these blockages, and we’ve seen significant progress,” Porcari told reporters at the White House on Jan. 5. “The impact of the omicron variant may continue to unfold. And we’ll remain focused on report — supporting the public health response, building on our progress to help ease bottlenecks in critical supply chains, and ensuring consumers have the goods they need.”

As part of the administration’s response to supply chain bottlenecks, the U.S. Department of Transportation recently announced more than $241 million in federal grants for 25 port projects.

The grants targeted facilities in 19 states as part of the administration’s port action plan meant to facilitate freight connectivity.

“U.S. maritime ports play a critical role in our supply chains,” said Transportation Secretary Pete Buttigieg. “These investments in our nation’s ports will help support American jobs, efficient and resilient operations, and faster delivery of goods to the American people.”

What Q4 and Beyond Have in Store for Transportation

Biden to Launch Task Force on Bottlenecks in Supply Chains