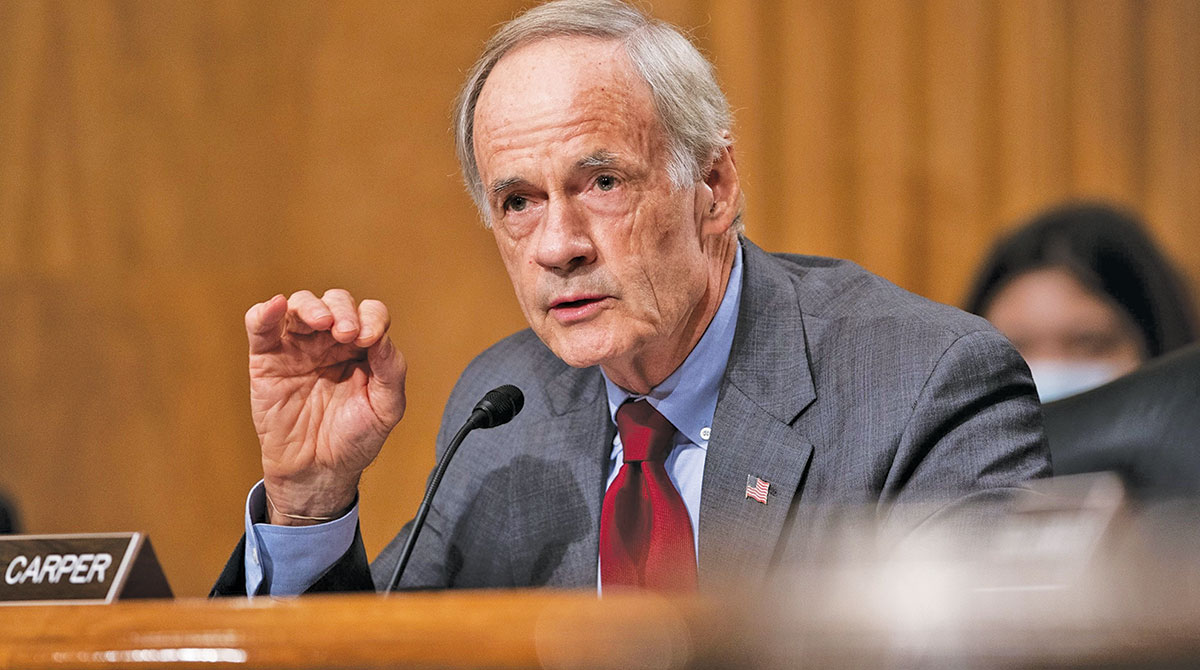 WASHINGTON — The top transportation policymaker in the U.S. Senate again called for passage of a $1 trillion infrastructure measure awaiting action in the House.

Sen. Tom Carper (D-Del.), chairman of the Environment and Public Works panel, pointed to the bill’s inclusion of a five-year update of federal highway programs, in addition to billions of dollars proposed for repairs and modernization projects for nearly every aspect of the transportation system.

Congress’ inability to reauthorize a 2015 highway law in September prompted the approval of a legislative extension that expires at the end of this month.

When we give working families a break, we’re not just raising their quality of life or putting parents in a position to earn a paycheck. We’re also positioning our country to compete.

That’s what the Bipartisan Infrastructure Deal and my Build Back Better Agenda are all about. pic.twitter.com/pQf6GwJUsF

“What I’m hoping for, and praying for, is the House will pass our infrastructure legislation, which passed by a bipartisan vote in the Senate,” the senator, who manages surface transportation policy decisions, told Transport Topics on Oct 6. “I hope the House will pass it as well, and that [it] provides, not just stopgap from month-to-month, week-to-week. But it provides for five-year reauthorization for surface transportation. That’s what we need to do. My hope is that’s what the House will do.

Parallel to the negotiations surrounding the infrastructure bill, congressional Democrats seek to advance a social infrastructure package through a fast-tracked budget process known as reconciliation. This reconciliation bill would incorporate aspects of President Joe Biden’s Build Back Better human-infrastructure plan. Amid pushback related to the bill’s original $3.5 trillion topline, congressional leaders, as well as the White House, have opened the door to consider a smaller budget bill. Somewhere in the neighborhood of $2 trillion seems to be gaining traction, Carper observed.

“I’ve said for weeks there’s a number between zero and [$3.5 trillion] that [works], for reconciliation, and I think I have some idea for what it is. We seem to be settling in around [$2 trillion, $2.1 trillion]. I think that probably gets us where we need to go; not where we’d like to go. It’s a, I think, a decent compromise,” Carper told TT.

House leaders scheduled consideration of the infrastructure measure for the end of the month. Speaker Nancy Pelosi (D-Calif.) called on colleagues to support both measures: “We will and must pass both bills soon. We have the responsibility and the opportunity to do so. People are waiting and want results.”

The budget reconciliation package’s initial price tag garnered pushback from most Republicans in the House and Senate, as well as Democratic Sens. Kyrsten Sinema of Arizona and Joe Manchin of West Virginia. Without the two Democratic senators, the chamber’s leadership would be unable to pursue a reconciliation legislative process that necessitates a simple majority for passage in the Senate. Democrats there are in the majority with 50 seats and the vice president.

To drum up support for his Build Back Better plan, Biden recently traveled to the Midwest. He acknowledged, to ensure passage of his agenda, its price tag would be lowered in Congress. “I want to make sure that we have a package that everyone can agree on. It’s not going to be $3.5 trillion. It’s going to be less than that. I don’t know what the answer to that is. And we’re going to get it done.”

Democrats have taken our roads, bridges, ports, airports, and waterways hostage to ram through an historically reckless taxing and spending spree that would hurt families and help China. The far left is running Congress and the American people are hurting. pic.twitter.com/uyBOIGwKs2

Besides the Build Back Better infrastructure and budget legislation, Capitol Hill’s fall agenda includes raising the debt limit and approving government funding for fiscal 2022. During the negotiations, Republican leaders have been critical of the Democrats’ approach to governing.

“The unified Democratic government had 2½ months to address the debt limit through reconciliation. Instead, they drifted to the doorstep of yet another self-created Democrat crisis,” said Senate Republican Leader Mitch McConnell of Kentucky. “Whether through miscalculation or a deliberate effort to bully their own members into wrecking the Senate, top Democrats have risked adding a default crisis to the inflation crisis, border crisis and Afghanistan crisis they have already created.”

AASHTO remains committed to getting a long-term surface transportation bill passed as swiftly as possible.

Stakeholders representing freight firms, business enterprises, labor unions, environmental associations and industries that rely on the construction and supply chain sectors have pointed to an inability to plan long-term due to the absence of multiyear federal transportation funding guidance.

Reauthorizing the federal and state partnerships on highway programs assists transportation agencies, said the American Association of State Highway and Transportation Officials, or AASHTO. Jim Tymon, the group’s executive director, affirmed, “AASHTO remains focused on the passage of a long-term surface transportation bill to ensure the delivery of a safe and efficient multimodal transportation system and we urge that Congress do the same.”

Pelosi Regroups on Infrastructure With Hopes for Vote Today