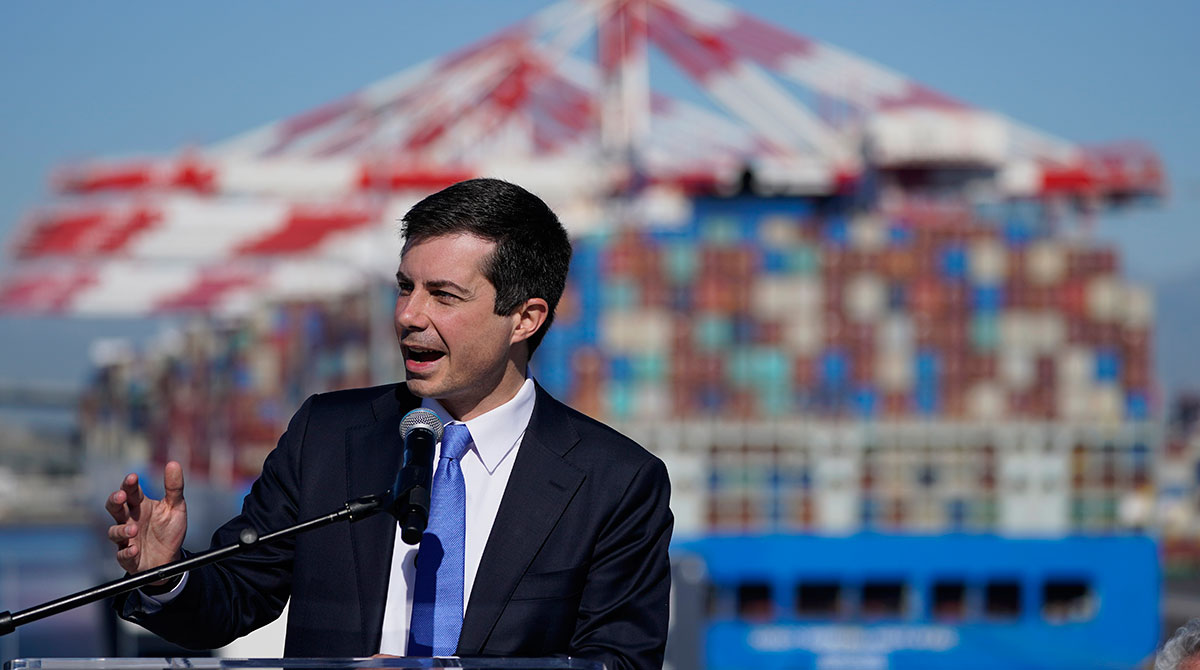 Buttigieg speaks at the Port of Long Beach on Jan. 11. (Jae C. Hong/AP)

Transportation Secretary Pete Buttigieg during a Jan. 11 tour of the ports of Los Angeles and Long Beach lauded the efforts that have kept freight moving through the facilities amid crushing backlogs, but said much work remains to prepare ports, roads and bridges for challenges that lie ahead.

“As long as the pandemic persists — as long as we are making up for decades of past disinvestment — we are going to see impacts on shipping times and shipping cost,” Buttigieg said during a press conference at the Port of Long Beach. “When there is an issue affecting ports here, you will feel it as far away as my Indiana hometown,” added Buttigieg, the former mayor of South Bend, Ind.

BUTTIGIEG TALKS TO TT: Sign up for Jan. 19 Newsmakers program

Since last spring, at times dozens of cargo ships sat anchored in San Pedro Bay waiting for berths to open at the two ports. While smaller backups occurred at the Port Authority of New York and New Jersey and the Port of Savannah in Georgia, the two California facilities garnered most of the attention since they collectively handle 40% of the nation’s imported goods.

Amid those backups, containers began piling up at the facilities, and shortages of truck drivers and warehouse workers exacerbated delays. But Buttigieg praised efforts at the facilities over the past three months to clear the backlogs and keep the supply chain moving as the holiday season and colder temperatures approached.

“Not only is this about the presents under the tree, this is about essential goods like medical goods that are needed in this moment of continued public health challenge,” he said.

Buttigieg called the ports’ efforts as 2021 ended “extraordinary,” noting that the facilities moved 14% more containers when measured against 2018, a record year for container volume and ships docked.

“One of the reasons why Christmas was not, in fact, canceled is that ports like L.A. and Long Beach moved record levels of goods, allowing an all-time record high in terms of retail sales this holiday season,” he said.

In October, President Joe Biden met at the White House with port leaders to develop a plan to begin 24/7 operations. While that near-term effort continues, Buttigieg said longer term, ports must be modernized to keep up with overall freight volumes that are expected to increase by 50% in 28 years, according to a November 2021 report from the Bureau of Labor Statistics.

Port representatives said at the event that 12 ships were waiting at anchor within 40 miles of the San Pedro Bay Port Complex, and another 93 were waiting further farther off the coast or were still approaching the ports.

According to the Mastercard SpendingPulse report, holiday sales from October through Christmas rose 8.5% year-over-year when measured against 2021. The National Retail Federation predicts that holiday sales would be up close to 12% when all tabulations are finalized.

The recently approved $1 trillion infrastructure law specifically has more than $17 billion in new money set aside for the nation’s ports for new cranes, waterway dredging projects and expanding access to the ports, especially when it comes to both truck traffic and rail. 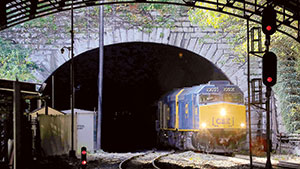 One project along the East Coast is an effort to expand the nearly 125-year-old Howard Street Tunnel that connects the CSX railroad to the Port of Baltimore. The $466 million project is expected to significantly increase freight traffic in the Mid-Atlantic region. It is targeted for completion in 2024.

The Buttigieg visit came just one day after California Gov. Gavin Newsom unveiled a plan to invest $2.3 billion in California ports as part of his proposed state budget.

“Our supply chain challenges require both near-term and long-term solutions. I applaud Gov. Newsom for meeting the moment with bold leadership,” Port of L.A. Executive Director Gene Seroka said in a statement. “The governor’s budget allocates $2.3 billion for ports to address bottlenecks in our supply chain, advance our efforts to decarbonize the freight system and ensure a robust and resilient workforce continues to move goods on behalf of the state and nation.”