A wafer is processed in a single wafer diffusion mechanism inside a semiconductor manufacturing facility in Malta, N.Y. (Adam Glanzman/Bloomberg News)

A drive in the Senate to quickly pass $52 billion in grants and incentives for U.S. semiconductor manufacturing picked up steam in Congress despite last-minute lobbying for changes.

Senate Majority Leader Chuck Schumer said July 18 that Democrats and Republicans were “hashing out the final details on a bill so we can move forward this week.”

He set a procedural vote for July 19.

The Biden administration, lawmakers from both parties and the semiconductor industry have called the chips incentives urgent amid a global shortage and supply chain disruptions that have affected industries such as automobiles, electronics and appliances.

“This is a matter of national security,” said Sen. Debbie Stabenow (D-Mich.).

The legislation is a scaled-down version of a more expansive bill intended to make the U.S. more competitive with China in technology and advanced manufacturing. That legislation has been hung up in negotiations between the House and Senate over how to merge their different versions.

In addition to the chips money, a draft bill circulated by the Senate leadership includes a 25% investment tax credit for manufacture of semiconductors and tools to create semiconductors, $500 million for an international secure communications program, $200 million for worker training and $1.5 billion for public wireless supply chain innovation, according to a copy of the text obtained by Bloomberg. 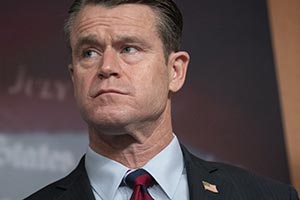 However, Sen. Todd Young (R-Ind.), who with Schumer was one of the co-sponsors of the original competitiveness bill, wants to include provisions that would establish a directorate for technology and innovation within the National Science Foundation to support basic and applied research and bolster education in science, technology, engineering and mathematics. Young conditioned his vote for the bill on those provisions being added into the draft.

Sen. John Cornyn (R-Texas) said multiple senators “are very invested in” that portion of the legislation. “You may find some people who say that’s not enough,” to provide the incentives for chip manufacturing.

In the House, Ways and Means Chair Richard Neal said he was pushing for the House version of the investment tax credit to be used rather than the Senate version. The House also would have to pass legislation before it could go to President Joe Biden’s desk.

The bill text also includes a provision that would bar companies that receive assistance from the U.S. government from any “material expansion of semiconductor manufacturing capacity in the People’s Republic of China” or another foreign country of concern for 10 years after the award date. That restriction would also apply to new investments in Russia, according to a person familiar with the matter. It would not apply to “legacy” chips, as older technology is called.

Some companies have raised concerns about some of the language in that section, arguing it’s unnecessarily restrictive and could hurt their competitive advantage in the long run. The dispute is highly technical and centers on the types of chips and their relative performance attributes, certain types of which would be off-limits for manufacturers despite already being produced in China. The industry is trying to balance politics, policy and a dynamic business environment, a person familiar with the matter said.

The White House has blessed the legislation, particularly the “guardrails” on investments in Chinese companies.

The legislation also is backed by tech giants such as International Business Machines Corp., which called the bill “essential.”

“Every day that passes without this legislation is another day that leaves America dangerously dependent on limited foreign supplies of semiconductors,” IBM Vice Chairman Gary Cohn said in a statement.

Proponents of the bill were trying to round up support, particularly among Republicans.

Some key Republicans, including John Thune of South Dakota and Joni Ernst of Iowa, said July 18 they were undecided.

“We’re looking at it, haven’t seen the final text so I haven’t made a decision yet,” Utah Republican Sen. Mitt Romney said.

Chipmakers Get $52 Billion in Senate Bill to Boost Domestic Output