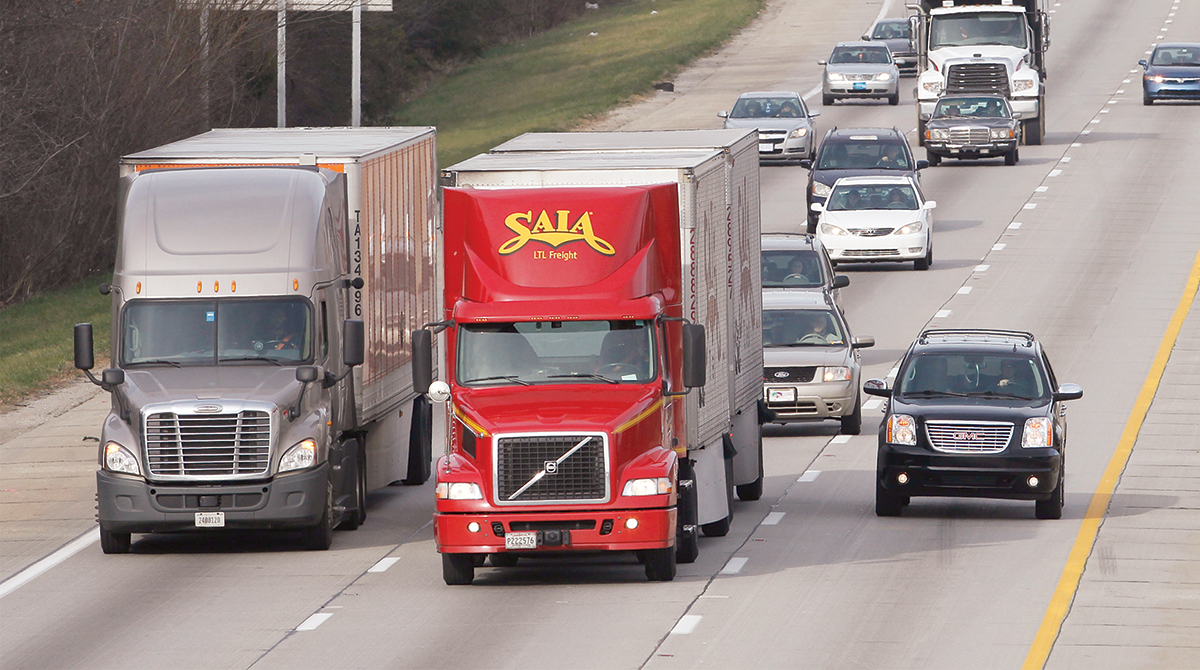 A Saia truck on the road. (John Sommers II for Transport Topics)

“The quarter was marked by consistent levels of demand from our customers, and growth in shipments per workday stepped up each month,” CEO Fritz Holzgrefe said in a Feb. 2 conference call with investors and industry analysts.

Holzgrefe said the revenue per hundredweight was an important financial measure that represented both price increases and improvements in the business mix.

“Our approach to pricing is simply market-based. We’re charging customers to the level of service they’re receiving and are seeking to step pricing in line with our competitors who offer comparable levels of service,” he said.

The company’s operating ratio — the percentage expenses represent of revenue — improved to 84.2 from 89.4 during the quarter.

Rivals such as Old Dominion Freight Lines have set a target to improve operating ratios into the high 60% range. Holzgrefe said Saia would work to meet the target if it becomes the new industry benchmark.

“Very similar to 2020, 2021 was filled with numerous challenges for our workforce and to post record results through ongoing COVID-related supply chain disruptions, as well as major storm events is a testament to thousands of dedicated Saia employees,” Holzgrefe said.

Saia is continuing to increase the size of its network. It added seven new terminals in 2021 to end the year with 176. Holzgrefe said the expansion would allow Saia to provide more direct coverage and get closer to its customers.

He cited two examples, including one in Atlanta, where a new second terminal in a different section of the metropolitan area significantly increased service and reduced lengthy connections. Saia also is in the process of filling gaps in the greater Chicago region with three terminals.

“As we look forward in 2022, we’re planning to add 10 to 15 team new terminals, and we’ll also be relocating 10 or so existing terminals into the larger or better positioned facilities as well,” Holzgrefe said.

“That’s a pretty good indication of what the shippers expect — kind of more of the same around their supply chain struggles and their desire to secure good, good capacity,” he said.

Like other carriers, Saia had trouble obtaining all of the equipment it had on order last year, especially trailers, as supply chain disruptions upended manufacturing schedules.

“OEMs have struggled to meet timelines. We’ve kind of built our plan around the idea of what we think will get from them, not necessarily what they have represented that they would provide us in terms of timing,” Holzgrefe said.

He said that that would provide Saia with a cushion and shouldn’t hinder operations.