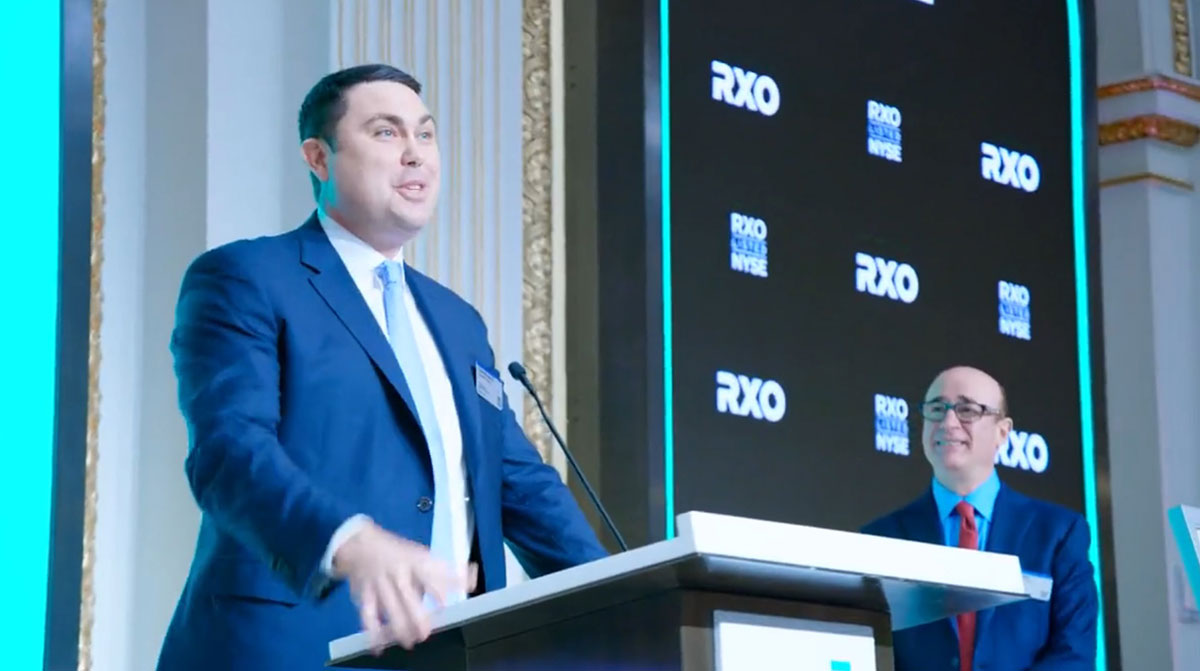 Drew Wilkerson, the new CEO of RXO, talks about plans for the brokerage company as XPO Logistics CEO Brad Jacobs looks on. RXO was spun off from XPO as a stand-alone business. (RXO via Twitter)

“We’re in the early innings of growing organically and taking shares in the market. The second thing is, we’re going to continue to focus on technology. RXO Connect is the best technology platform in the industry today.”

Watch as we take you behind the scenes of the @rxoinc spinoff today #NYSECommunity (NYSE: $RXO) pic.twitter.com/c7MHZjxQKX — NYSE (@NYSE) November 1, 2022

XPO Logistics Inc. founded the company by separating out its tech-enabled brokered transportation platform into an independent and publicly traded company Nov. 1. RXO is now trading on the New York Stock Exchange. Its leadership team and board members celebrated the launch by ringing the opening bell to begin the day of trading.

“It was a surreal moment at the stock exchange,” Wilkerson said. “To be able to have that opportunity, it was humbling and rewarding for all of us. And then to look at some of the new folks that we have brought on to the team and to look at what we’re going to be able to accomplish over the next decade was extremely exciting.”

Wilkerson believes the company is well-positioned. He noted bid activity is stronger and that the business is growing with existing customers while bringing on new customers. His primary goal over the next five years will be to organically grow EBITDA to a range of 475 to 525.

“We’ve laid a lot of groundwork over the last decade to grow three times faster than what the brokerage industry has been growing,” Wilkerson said. “But we feel like the next decade is going to be even better for us because the foundation has been laid.”

RXO was separated into a stand-alone business to focus more on strategic priorities, customer requirements and stakeholder interests. Essentially, the management team will have greater flexibility and focus when it comes to decision-making.

“We’ve got a management team that’s entirely devoted to growing RXO,” Wilkerson said. “When you look at what we were doing in the past, it was a great thing for professional development for me to sit in on calls about LTL and European transportation, and not just me, even some of my team members. But it also takes your focus away from what is most important in your life, and that is RXO for us.”

When you look at what we were doing in the past, it was a great thing for professional development for me to sit in on calls about LTL and European transportation.

RXO will broker truckload freight via a proprietary digital freight marketplace that provides access to truckload capacity and complementary brokered services for managed transportation, last-mile and freight forwarding. Its launch represented nearly a year of groundwork to spin off those operations.

“It feels great,” Wilkerson said. “The team has worked really hard for this. There’s a lot of folks who have worked together for a long time. The vice president level and above has been with us for a decade on average, so that this team is a cohesive team that’s operated for a long time.”

XPO announced in early 2020 that it planned to spin off or sell four of its five main business operations. It has since been working to separate out those operations with the goal of becoming a pure-play less-than-truckload carrier. The RXO launch came a little over a year after XPO separated its global contract logistics operations into GXO Logistics.

“The first thing that we did was spin off our supply chain business,” Wilkerson said. “The second piece is spinning off RXO. The third piece for XPO will be whenever they sell or divest Europe. That’ll leave XPO as a pure-play LTL company. For us, though, we’re focused on just continuing to grow our tech-enabled truck brokerage and take market share.”

Wilkerson also will serve as a board member. He previously was president of North American transportation at XPO. Brad Jacobs will serve as nonexecutive chairman. He also is chairman of XPO and GXO. Wilkerson credits working under him as helping prepare him to lead the new company.

“Just working with Brad for a decade is a once-in-a-lifetime opportunity,” Wilkerson said. “It’s been a great learning experience for me, and he’s been a great mentor for me. One thing that I’ve learned from Brad is, it’s all about the people. And when you look at RXO, that’s what we’re focused on.”