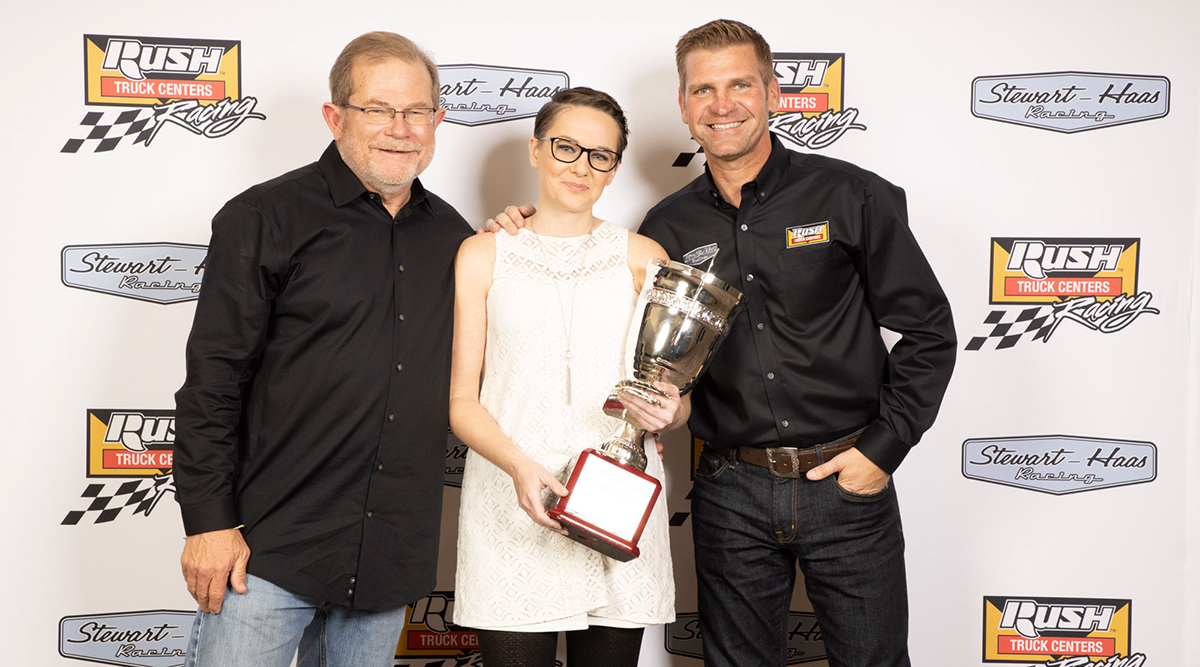 SAN ANTONIO — Rebecca Chewning’s bid for recognition at last year’s Rush Enterprises Tech Skills Rodeo sputtered in the first round, but her experience was not at all the same this year in her second time in the competition.

A crowd of some 900 people at the final ceremony Dec. 17 stood together to applaud not once, but twice for Chewning, when she was declared winner in the Hino parts division and when she was named one of the all-around grand champions. It was the first time a woman had won a category in the event’s 14-year history. 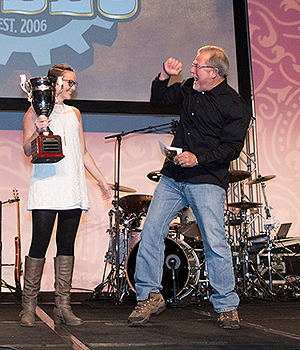 Chewning, who’s worked for three years as a medium-duty inside parts sales representative at a Rush Truck Center in Dallas, won about $8,500 in cash and prizes.

She attributed her glass ceiling-breaking moment to the adaptable, motivated attitude she brings to work.

“Everybody standing up like that was just really overwhelming,” Chewning said. “It was amazing and fantastic to see the support that I had from everybody.”

Justin Euler, a technician at the Rush Truck Center in St. Peters, Mo., was crowned the all-around rodeo champion this year — the second time he’s won the top distinction.

At the awards ceremony, he was welcomed to the stage by Rush Chairman and CEO W.M. “Rusty” Rush and NASCAR driver Clint Bowyer, who races a Rush-sponsored No. 14 Ford Mustang for Stewart-Haas Racing.

Euler is no stranger to winning recognition at the Tech Skills Rodeo. He’s won a handful of prizes in the years since his first competition in 2014, including his first all-around rodeo championship in 2017. He walked away with $16,000 in cash and prizes this year.

“Sometimes you don’t know how well you did,” Euler said, adding that even though he’s a two-time champion and plans to compete in future years, there’s no guarantee that he’ll even qualify next time. “It’s tough every year. You just never know whenever you take that test and hit that final button to send it off. It’s anybody’s ballgame.” 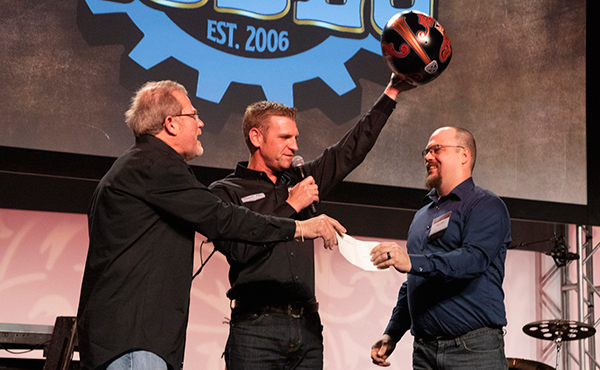 Rush executives said the event benefits the company in several ways. Perhaps most importantly, it helps with recruiting and retaining new technicians, which has grown increasingly important in a tightening labor market.

This year’s rodeo named roughly 50 winners from an initial qualifying field of 2,500, making the honor a prestigious one.

Andres Campa, a 21-year-old who works in Rush’s San Antonio shop, emerged as one of the most prominent examples of the company’s goal to hire and train promising, young technicians.

Campa joined Rush about a year and a half ago and has attributed his quick development to working hands-on with more experienced technicians in a variety of real-world situations as part of the company’s mentorship program.

This was his first rodeo, and he walked away with the top prize in the heavy-duty Paccar MX category, which came along with a $5,000 prize. He plans to return next year.

“I want to see where I go, get farther in it, see what happens,” Campa said.

It's pride, right? It's pride to them. It's a reward for the hard work and dedication of people that strive to be better, day in and day out.

Rusty Rush said the skills competition works to enforce a company culture of consistent effort paying off. He and other executives reiterated that Rush Enterprises was not the kind of place where a person just looking to come in and punch the clock would thrive. The rodeo serves as a real example of how commitment pays dividends, he said.

“It’s pride, right? It’s pride to them,” Rush said. “It’s a reward for the hard work and dedication of people that strive to be better, day in and day out.”

That’s a mentality he has used to expand Rush Enterprises since succeeding his father Marvin Rush as CEO in 2006, the first year the rodeo was held.

Rush, the country’s only publicly traded truck dealer, has 7,356 employees and operates more than 120 locations across the United States.

In February 2019, the company announced it had acquired a 50% stake in Rush Truck Centres of Canada Ltd., its first venture north of the border.