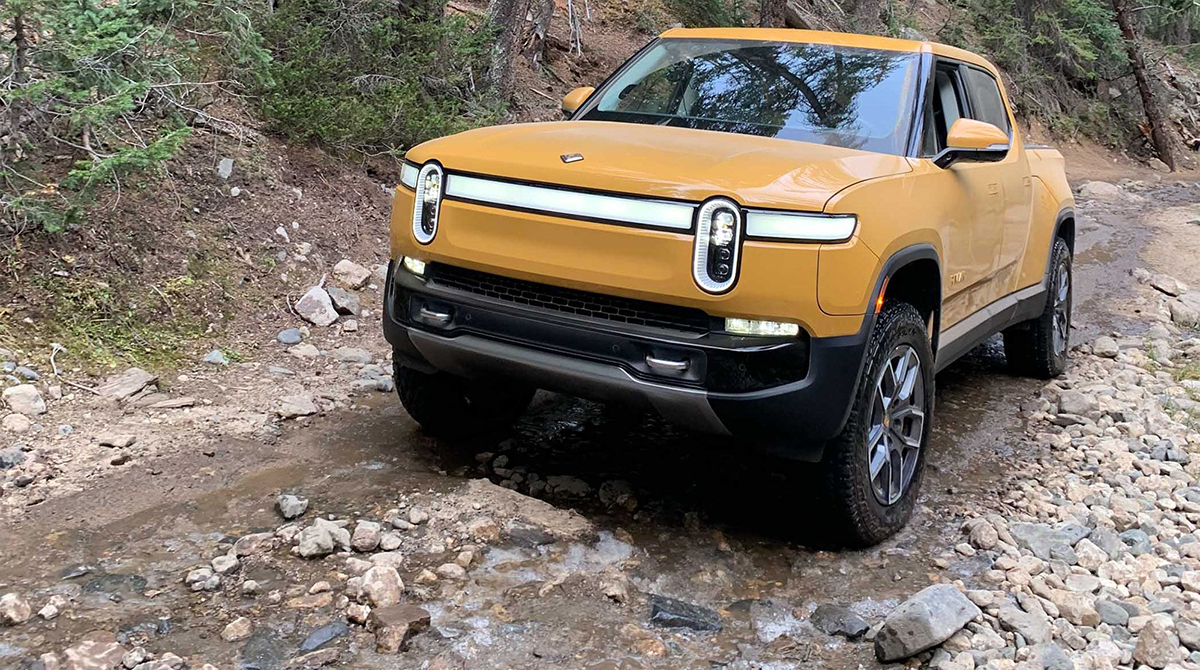 Call it the Goldilocks strategy, a sweet middle ground that might swipe customers from two of the auto industry’s largest segments.

These are the kinds of choices one can make when building a car company from scratch. When Rivian set out to design its flagship product, it didn’t have to dip into a conglomerate’s bins of parts where everything tends to fall in one of three buckets: small, large and supersized. At nearly every turn it could steer for the so-called white space, the little product gaps that giant incumbents are no longer agile enough to slip into. Thus a pickup that isn’t “full-sized” or “midsized,” but a little of both.

It has been six years since founder and CEO R.J. Scaringe charted this territory and reckoned electric vehicles didn’t have to be earnest, eat-your-vegetables compacts or swanky sedans. Why not give the people what they want — something big and burly, minus the carbon guilt, right?

Detroit is to trucks what Tom Brady is to footballs: Underestimate its comeback prowess at your peril. Rival electric trucks have been spun up quickly and are coming for Rivian relentlessly. Its first-mover advantage, dinged by production delays on the front end and crunched by a manufacturing blitz from competition on the back end, has shrunk to a matter of months.

General Motors Co.’s electric GMC Hummer is coming in months, followed quickly by Ford’s plug-in F-150 Lightning. And by the end of next year, Elon Musk is expected to roll out Tesla Inc.’s Cybertruck from its massive plant in Texas, deep in the heart of truck country. Meanwhile, Ford has found some white space of its own with its Maverick, a slip of a pickup with a pint-sized price tag.

Rivian is being squeezed tighter still by Amazon chairman Jeff Bezos, whose order for 100,000 delivery vans is cutting much of the Rivian line for consumer vehicles.

RELATED: Rivian’s Electric Truck Gets All the Attention, but Fate Is Tied to Amazon

The lane, in short, will quickly be crowded, which raises the question, how big is it? What’s the market for an electric truck — be it with a flatbed or in SUV form? Our extremely unscientific, back-of-the-envelope calculation: about 36% of the U.S. market. That’s the population that in a year buys something that somehow resembles a Rivian. Here’s how this breaks down:

First, there are the trucks. Pickups grabbed 18% of U.S. buyers in the first half of 2021, almost one in every five vehicles sold. Then there are the SUVs (Rivian has one of those coming as well). This year through June, SUVs the size of a Rivian — neither a tiny “crossover” nor a mammoth land yacht — composed 15% of U.S. vehicle sales.

Then there’s the electron crowd, the much smaller swath of consumers eager for EVs. It’s not a stretch to assume a would-be Tesla buyer might be towed over to a Rivian. Its machines will certainly have more curb presence, and Tesla’s utility as a signifier of Silicon Valley-style contrarianism has long since worn off. This year, U.S. residents are on pace to buy somewhere around 450,000 electric vehicles, almost 3% of the market.

US Sales by Segment

All told, that’s about 5 million vehicles a year, depending on how hot the car market is running. If Rivian is to sell 500,000 trucks a year — a Tesla-size scale — it will have to grab 10% share from each of these segments, which would be a coup.

The company’s own projections are a little more sanguine. Rivian is telling investors that its addressable market is 7.9 million consumer vehicles per year in the near future (though that estimate includes customers in Canada and Western Europe).

The whole equation, however, tilts against Rivian as the price of its vehicles rules out two huge demographics: first-time buyers and the tradesmen and companies that use trucks for work. It will have to win en masse the weekend warriors driving Toyota Tacomas, said Stephanie Brinley, an analyst at IHS Markit. “And getting a lot of buzz at the auto show is not necessarily the same thing as getting in the view of car owners when they’re ready to buy,” she explained. “They still have some awareness issues and consideration issues to work through.”

The Rivian math, at this point, requires both a green eyeshade and a very rosy pair of spectacles. But there is a big wild card to consider: the EV curious, the holdouts. Think of all the ski moms and kayak dads who pine for a big rig, but can never quite justify the carbon footprint. A bunch of these folks also probably haven’t yet bought an EV, because the options until now have been too small and, now, they know the big ones are nigh.

Indeed, Rivian says nine out of 10 of its preorders to date came from people with gas-burning cars. It’s anyone’s guess how much overlap there is in the Venn diagram of truck lust and carbon conscience, but I suspect it’s not an insignificant part of the driving psychographic. Rivian certainly seems to think so.