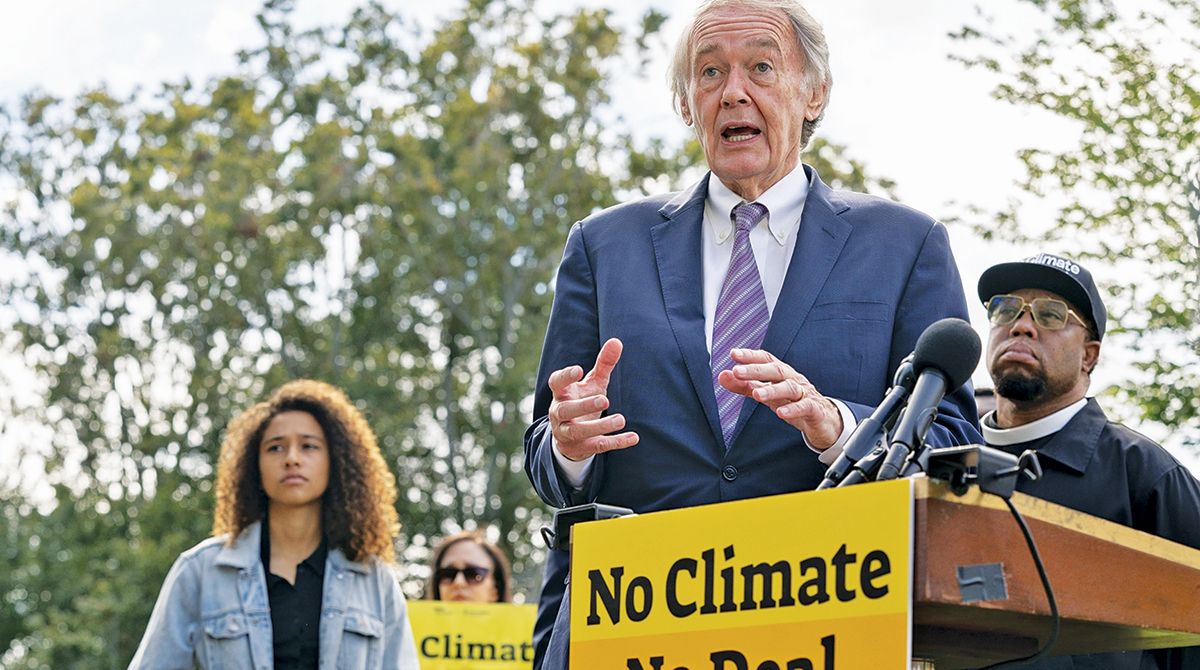 Markey speaks during a news conference outside the Capitol Building. (Stefani Reynolds/Bloomberg News)

As Democrats work on a revised multitrillion-dollar budget package, Republican transportation leaders have ramped up their criticism of congressional leaders and the Biden administration.

Senior Democrats in the Senate are insisting climate change-centric proposals, such as programs linked to severe weather infrastructure resilience, be included in the final package of a budget reconciliation bill. Democratic Sens. Ed Markey of Massachusetts and Chris Coons of Delaware are among the lawmakers pushing for adoption of a civilian climate corps, proposals designed to phase out fossil fuel tax breaks and enhancing freight corridors’ resilience to severe weather events.

Addressing the civilian climate corps, Markey argued, “It just goes to the question of climate justice because this program will ultimately employ hundreds of thousands of people, 50% of which will come from communities and 50% of the funding will go into communities of color, in order to remediate those historic environmental injustices which have affected Black, brown, immigrant communities disproportionately, and we have the strong support from the White House and from the leadership that it will be included.”

“The [civilian climate corps] is just a part of the broader agenda for how we’re going to make a lasting difference on the impact of climate here in the United States,” Coons said.

The multibillion-dollar proposals are backed by progressive Democrats in both chambers. Intraparty disputes over the size of the budget measure have led Democrats to acknowledge they potentially need to settle for $2 trillion for social and climate change infrastructure programs. Just weeks ago, the party’s leadership was pursuing a $3.5 trillion budget reconciliation package. Sens. Joe Manchin (D-W.Va.) and Kyrsten Sinema (D-Ariz.) are credited with moving the needle on the price tag.

Speaker Nancy Pelosi (D-Calif.) expressed disappointment that President Joe Biden’s “Build Back Better” domestic agenda would be cut by about $1 trillion. She suggested, without offering specifics, reductions in the budget bill would probably entail eliminating certain programs. Freight stakeholders point to the potential for reducing transportation funds in the Build Back Better budget package.

Pelosi continued to push her caucus to pass the fast-track reconciliation legislative process alongside a $1 trillion infrastructure measure. As she observed, “[Build Back Better] is three baskets. It’s climate, which we spent some time talking about already; health, job security and moral responsibility. It’s health care: the issues that relate to the Affordable Care Act, Medicare and Medicaid. And family care. I mentioned some of those issues already.”

“And so whatever we do, it will be transformative. It will produce results,” the speaker argued.

Most Republicans, however, insist they will oppose a comprehensive expansion of intricate environmental regulations. They point to progressive Democrats’ Green New Deal proposal for tackling climate change as the focus of their opposition, which they liken to Biden’s Build Back Better agenda.

The GOP leadership on Capitol Hill and the top Republicans on the transportation panels also blame the White House’s policies and Democrats’ budgetary goals for ongoing supply chain crises and setting up a potential year-end fiscal showdown.

Rep. Sam Graves (R-Mo.), Transportation and Infrastructure Committee ranking member, said, “The policies of the president and his party’s leaders in Congress are exacerbating or ignoring the underlying supply chain issues, from their mishandling of the COVID response in ways that are prolonging unemployment and worker shortages across the economy, to their push for a multitrillion-dollar spending spree that is driving up prices of everything from gas to groceries.” 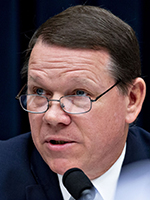 “No amount of regulations will solve the crisis of President Biden’s own making,” added Rep. Bruce Westerman (R-Ark.), ranking member on the Natural Resources Committee. “While he is paying Americans more money to stay home instead of going back to work and implementing mandatory vaccine requirements that will add to the record number of Americans quitting their jobs under his tenure, companies simply cannot find manpower to drive trucks, offload ships, fulfill orders or do any of the other millions of jobs needed to keep our supply chain functional.”

Rep. Steve Scalise (R-La.), a senior member of House Republicans’ leadership team, took issue with the Democrats’ strategy of linking a $1 trillion infrastructure measure with an even larger social infrastructure budget bill. As a compromise, he proposed pursuing bipartisanship across the legislative process.

“They really should be working with us on an infrastructure package that would pass overwhelmingly, but instead they just have an insatiable appetite to raise taxes and spend more money,” Scalise said during a news broadcast Oct. 10. “It would kill jobs. It would hit middle-class families.”